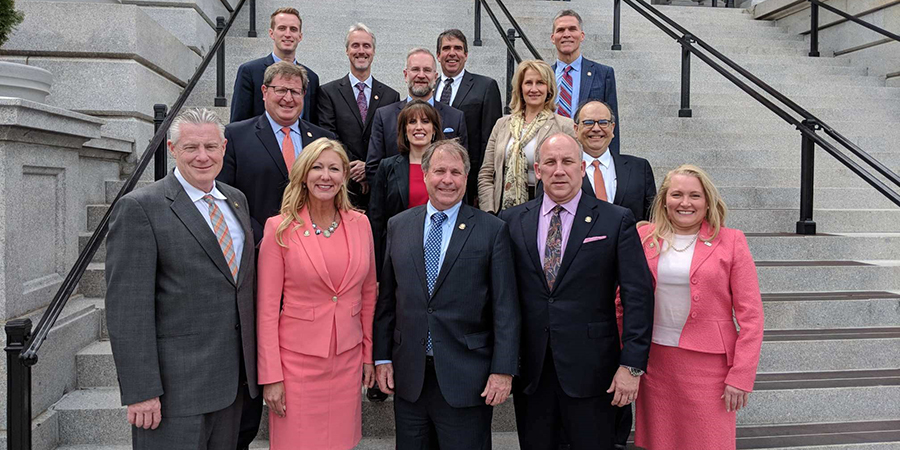 AOA Board of Trustees and Andy Mackner, AOSA past president, at the White House during AOA on Capitol Hill 2018.

"While not much is certain in our nation’s capital right now, what is clear is that the doctor-patient relationship is under attack. And, that we must continue to protect it."

Advocates met that tall order head-on at a crucial time in the political cycle as U.S. House and Senate leaders prepare for November's midterm elections amid growing levels of uncertainty in Washington D.C., noted AOA President Christopher J. Quinn, O.D. That made it all the more important for advocates to make clear to lawmakers the need to protect the doctor-patient relationship, Dr. Quinn stressed before attendees' Congressional meetings.

"Questions remain about what policies this Congress will tackle in its remaining months and what priorities are on the horizon for the new Congress next year—whatever its makeup might be," Dr. Quinn said. "While not much is certain in our nation's capital right now, what is clear is that the doctor-patient relationship is under attack. And, that we must continue to fight to protect it."

That outside pressure—be it from abusive health and vision plan policies, illegal online vision tests,  online mass retailers that circumvent patient protections, or device loopholes that put patients at risk—is what AOA on Capitol Hill addressed, arming advocates to defend patients and the profession on and off Capitol Hill, and right down Pennsylvania Avenue.

"We're seeing the powerful impact of the AOA's sustained commitment to advocacy," said Samuel D. Pierce, O.D., AOA President-elect. "From the White House to Capitol Hill, from the FTC to the Veterans Health Administration, our AOA is being heard loud and clear right now in Washington, D.C., and it's making a difference for our practices and our patients. Although government moves very slowly, the new support for our legislative and regulatory priorities has us setting the agenda."

In a milestone opportunity for the profession, optometry's leaders were twice ushered through White House security for meetings with aides to the president and vice president.

Led by Dr. Quinn, the AOA Board of Trustees, AOSA Past-President Andy Mackner and AOA staff went to the White House to brief Steve Munisteri, deputy assistant to President Donald Trump, and Vice President Mike Pence's domestic policy team about the importance for the FTC to prioritize patient safety and withdraw its flawed Contact Lens Rule proposal, as well as build awareness and support for optometry's growing, crucial role in health care.

AOA's message—to include optometry and its frontline, patient-centered role in the future of health care—was delivered clearly and effectively to receptive administration staff.

These briefings bolster the relentless national effort by AOA, state affiliates, doctors of optometry and students to change the tide and urge the FTC to abandon its harmful mandate in favor of increased enforcement aimed at combatting illegal contact lens sales.

Only weeks removed from an industry-encompassing contact lens workshop and amid the FTC's ongoing regulatory review of the Contact Lens Rule, doctors and students continued to educate legislators about the 'solution in search of a problem' that is the FTC's paperwork mandate proposal.

Optometry's advocates reinforced how the FTC's proposal represents unnecessary red tape that will impose compliance costs of more than $18,000 per doctor, per year on small and mid-sized practices without making any effort to crack down on the real threat of illegal sales that can put patients' health at risk.

In response, some online retailers amped up their rhetoric during the week. Recently outed for potentially generating propagandist content, online sellers and their coalition stepped up their social media campaign to undermine doctors and the quality patient care they deliver. However, optometry's message is too h2 to be drowned out.

Already, more than 100 senators and House members, and congressional committees, have weighed in and offered a bipartisan message of concern for the FTC's proposal and its lack of enforcement aimed at illegal contact lens sales. Yet AOA redoubled its efforts and advocates once again worked to build support for a new bipartisan letter from Reps. Michael Burgess, M.D., (R-Texas) and Bobby Rush (D-Illinois)—both leading members of the powerful U.S. House Energy and Commerce Committee—during AOA on Capitol Hill.

Those efforts were bolstered by Sen. Rand Paul, M.D., (R-Kentucky)—an ophthalmologist—who recently signed his own letter to FTC Acting Chairwoman Maureen Ohlhausen, urging the commission to reconsider this misguided rule due to the harmful impact "for practicing eye doctor[s], both optometrists and ophthalmologists." Sen. Paul joins more than a dozen other senators publicly opposing the FTC's proposed mandate.

The paperwork proposal was also a topic of dialogue during Monday's Health Policy Listening Session, where the Health Care Alliance for Patient Safety briefed attendees on their recent advocacy. Created in January 2018 as an advocacy partnership among AOA, Johnson & Johnson Vision, CooperVision and VSP, the alliance works to improve patient eye health and safety through communication to legislators, regulators and the public.

The alliance highlighted its ongoing advocacy activities, including a h2 presence at the FTC's contact lens workshop, convincing lawmakers to weigh in with the FTC urging improved enforcement aimed at combatting illegal contact lens sales, and helping to secure language in recently passed spending legislation, which urges the FTC to better focus its efforts on issues affecting patient health and safety.

"It's important when we're meeting with legislators over the next two days that we educate them about these threats and what they can do to protect patients' eye health and vision care," Dr. Pierce told attendees. "We need them to get involved and support their local communities through small businesses and the doctor-patient relationship."

In a special session Monday afternoon, AOA on Capitol Hill invited a guest panel of veterans' associations and representatives to discuss the future of Veterans Health Administration (VA) care and the VA Optometry Service. Included in the VA panel discussion were:

With VA care under scrutiny not only from Congress and the President, but also health care groups concerned about the health care system's direction, the veterans panel hosted a moderated discussion on privatization of care, rural access and the use of telehealth, and the importance of VA residencies to optometric education.

Veterans groups found common ground on numerous issues that AOA and AFOS continue to advocate for, including preserving the doctor-patient relationship as telehealth programs—such as the VA's pilot TECS—are tested at various VA locations.

Added Villanueva: "I completely agree with Dr. Read. For the more rural veterans, technology like that can be utilized as long as it doesn't affect the quality of care given the veteran, and we do believe that it can never replace a face-to-face with their doctor."

On a personal note, Webb noted that her own diabetic son undergoes extensive, routine eye examinations and she "couldn't imagine using telehealth for that kind of examination," while Jirak stressed that there must be no degradation to the quality of care furnished to veterans with telehealth technology.

Now in the second session of the 115th Congress, House members are devoting their support to the AOA-backed, H.R. 1606, Dental and Optometric Access Act (DOC Access Act). Championed by lead sponsors, Reps. Earl L. "Buddy" Carter (R-Georgia) and Dave Loebsack (D-Iowa)—prominent members of the House Committee on Energy and Commerce—H.R. 1606 has earned its highest level of bipartisan support yet with 91 co-sponsors and counting.

The health, dental and vision plan legislation would complement state-level efforts by disallowing detrimental policies by ERISA and other federally regulated vision and health plans, including:

Consider contacting your House member to explain how current health and vision plan policies negatively impact your patients and practice, and ask them to support H.R. 1606. Visit AOA's Online Legislative Action Center to send a request to your House member, or to thank them for their support.

Once again, those legislators and government officials who advance efforts related to eye and vision care were recognized with AOA Health Care Leadership Awards. This year, the AOA Advocacy Group recognized three leading members of Congress during Tuesday's Breakfast with Optometry's Champions, including:

Each member of Congress spoke to the importance of professional advocacy and engaging in the political process, while several spoke to their own personal stories of how doctors of optometry made a difference in their lives.

Additionally, Sen. John Boozman, O.D., (R-Arkansas) was awarded a 2018 AOA Health Care Leadership Award during the meeting's opening reception. Sen. Boozman has led the charge against the FTC paperwork mandate and has fought efforts to undermine veterans' health care, including through the TECS program—which he likened to "third-world care" before former VA Secretary David Shulkin.