Do you know optometry’s advocacy priorities? Learn the issues before Virtual AOA on Capitol Hill

February 17, 2021
Virtual AOA on Capitol Hill, May 23-25, is open to all advocacy-minded doctors, optometry students and paraoptometrics. Learn the issues and get involved at optometry’s premier advocacy event. 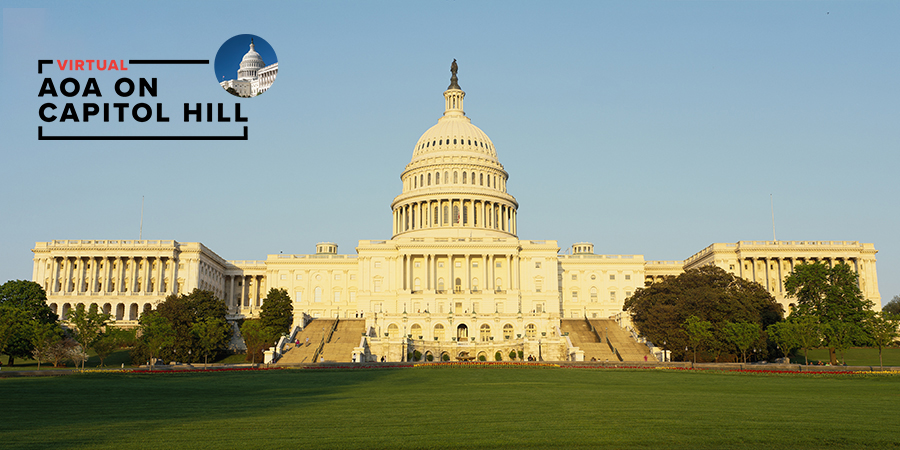 Entering year two of a global pandemic with new priorities and direction before the U.S. Congress, the AOA’s advocacy began earnestly addressing the immediate needs of optometry practices. But it’s your voice that will make the difference.

Virtual AOA on Capitol Hill, May 23-25, is that opportunity for advocacy-minded doctors, optometry students and paraoptometrics to voice optometry’s priorities and leave a lasting impression on members of Congress. The single-largest annual advocacy event and centerpiece of optometry’s federal advocacy efforts, Virtual AOA on Capitol Hill returns in a virtual format for 2021 with a goal of building upon what was a record-breaking-attended event in 2020 that helped solidify crucial opportunities and wins for optometry.

“Even in its virtual form, AOA on Capitol Hill keeps growing in attendance with engaged doctors, staff and students who come together from across the nation to ensure our essential advocacy program translates into effective advocacy on Capitol Hill,” says William T. Reynolds, O.D., AOA president. “With so much riding on our priority issues, at such a critical time in the pandemic response, we encourage those with a mind toward advocacy to log in and get involved.”

Know before you go: AOA’s 3 priority issues for Virtual AOA on Capitol Hill

While the COVID-19 public health emergency and Congress’ potential response still loom large in Washington, D.C., the AOA identified three priority topics that optometry’s advocates will take to lawmakers during Virtual AOA on Capitol Hill, including:

With so much riding on these issues, the AOA is encouraging the profession to turn out for Virtual AOA on Capitol Hill and help move these priorities forward. Greater representation across the profession will help optometry’s advocates make a lasting impression while meeting with members of Congress—and that includes practice staff.

Linda Rodriguez, CPO, AOA Paraoptometric Resource Center chair, says there’s incredible benefit in involving paraoptometric staff in the legislative process, giving a sense of team-ownership in the profession’s advocacy and a chance to advocate for their own careers.

“As members of the optometric community, paraoptometrics will represent an added voice and multiply the efforts in advocating for optometry and its patients,” Rodriguez says. “Doctors of optometry who encourage their paraoptometrics’ attendance in this event will find that their participation will facilitate commitment, dedication and engagement in their role to further and safeguard the profession of optometry and its patients.”

These issues immediately affect optometry practices, their current viability and future prosperity, and require a unified voice on Capitol Hill to ensure the AOA’s success for optometry. Please consider registering yourself, and your practice staff, today.

What: Virtual AOA on Capitol Hill
When: Online sessions available at various times, May 23-25 (consult agenda for specific sessions)

Get a jump-start on Virtual AOA on Capitol Hill— visit the AOA’s Action Center to see what issues require members’ immediate attention and start writing your House and Senate members to urge their attention to optometry’s priorities. Or text “RELIEF” to 855.465.5124 to get involved in the current COVID-19 relief efforts.

For more information about Virtual AOA on Capitol Hill, agenda questions or the issues, email advocacy@aoa.org or call 800.365.2219. Please note: Virtual meetings with members of Congress are pre-arranged and coordinated through state associations.