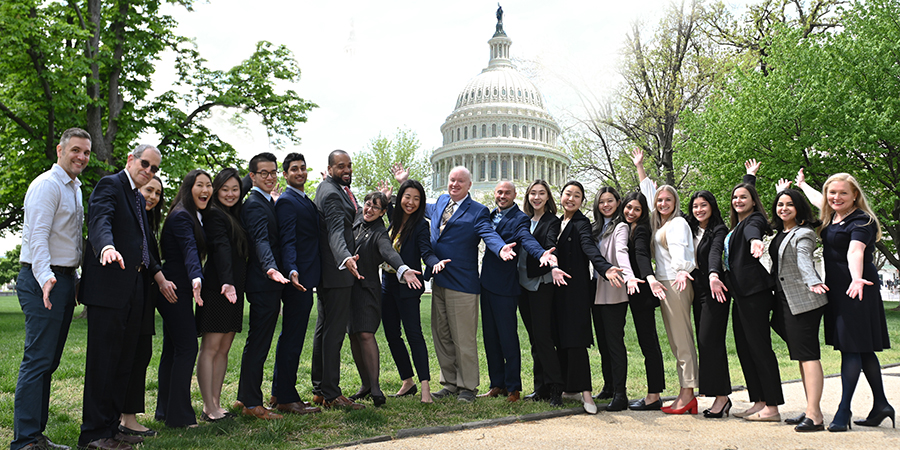 Washington, D.C . – A constant refrain for fairness and reform in the broken vision and health plan market met members of Congress—and featured prominently in their Twitter accounts—as nearly 600 of optometry’s advocates sought a bipartisan legislative solution to the increasing and outrageous burdens imposed by payers.

The Dental and Optometric Care Access Act (DOC Access Act), H.R. 3461/ S. 1793, was chief among the rallying issues that a record number of doctors of optometry and students championed to their federal representatives at the joint AOA on Capitol Hill and AOA Payer Advocacy Summit, April 24-26, after two years of doctors maintaining “virtual” connections with lawmakers. Aligned this year with a singular focus on addressing payer abuses harming optometry practices, the AOA’s largest annual advocacy event saw AOA doctors and students taking optometry’s message to nearly the entire Congress and, in between, filling corridors on both the U.S. Senate and House of Representatives sides of the Capitol.

“The AOA is educating and informing lawmakers about efforts by certain plans and insurance executives to gain control of our practices and interfere with doctor-patient decision-making. By supporting bipartisan legislation that is gaining momentum and working closely with groups like the American Dental Association and leading, national, pro-patient advocates, we’re mobilizing to change a rigged system,” said AOA President Robert C. Layman, O.D.

“Enough is enough. I see the impact of these harmful plan policies in my own practice and in practices of colleagues across the country. Together with every state association, our AOA is fighting back with the same determination and doctor involvement that helped us in 2020 and 2021 to win full inclusion in physician pandemic relief legislation," he added.

Referencing those crucial achievements for optometry practices, Dr. Layman noted the AOA’s advocacy added tens of millions to the more than $2.1 billion dollars in pandemic relief already delivered to doctors and their practices, as well as helped stop a nearly 10% Medicare pay cut at year’s end and prevented lobbying efforts to hijack Congress’ plan for a new vision benefit under Medicare.

Dr. Layman noted the AOA’s advocacy surrounding contact lenses helped result in a record $3.5 million fine against Hubble contacts and directed Congress’ attention toward the necessity for better enforcement of direct-to-consumer (DTC) contact lenses. Additionally, the AOA and Armed Forces Optometric Society (AFOS) built on the removal of the Department of Veterans Affairs (VA) optometry laser prohibition and built critical momentum for the DOC Access Act after years of advocacy.

“We’re proud of where we’ve been, but today we need to be squarely focused on where we are right now—and where we’re going,” Dr. Layman said. “This year, we’re almost singularly focused on building support for legislation fighting back against vision plan abuses … and we’re proud to have more than a half-dozen new national groups—from both the left and right side of the political aisle—fighting alongside us, backing our call for Congress to pass the DOC Access Act now.”

Introduced in the House and Senate, the bipartisan DOC Access Act complements state-level vision and dental plan laws enacted in 44 states by disallowing detrimental policies by ERISA and other federally regulated vision, dental and health plans. As roughly one-third of patients in any given state have a vision and/or dental plan that is federally regulated—and not beholden to state laws—the DOC Access Act would prohibit plans from:

Additionally, the bill would limit plan-doctor agreements to two years unless otherwise indicated by the doctor and include a private right of action for doctors to take offending plans directly to court.

Happy to meet the @wvaop in Washington and receive the 2022 @AOAConnect Health Care Leadership Award for my DOC Access Act, which would give patients and doctors more control of their healthcare decisions and increase access to dental & vision care. pic.twitter.com/nvUQcHhWDm

In early April, the Hispanic Leadership Fund cast its support behind the DOC Access Act, noting that insurers “manipulate the free market” with policies that amount to “scheme[s] set up to benefit insurance companies.” Weeks later, the Southern Christian Leadership Global Policy Initiative noted its support in a letter to Rep. Yvette Clarke, D-N.Y., where the civil rights advocate underscored that unraveling “some of the power and dominance that the vertically integrated vision plan behemoths have amassed over the years” could help boost access to eye and vision care “while ensuring that our families aren’t priced out of getting the high-quality vision correction [they] deserve.”

The multi-year effort to pass the AOA- and American Dental Association (ADA)-backed DOC Access Act remains a key priority for both professions with the ADA Dentist and Student Lobby Day in March also focusing on building support for insurance reform. Still, more support is needed to make this bill a priority in Congress.

“Plans increasingly are profiting from a system that is rigged on their behalf, and for patients that means higher prices and lower choices. For doctors that means right in the middle of our doctor-patient relationship we have vision care plans.”

On Sunday, the joint session opened with an interactive panel discussion, moderated by AOA Third Party Center (TPC) Chair Steve Eiss, O.D., on nondiscrimination and Section 2706(a) of the Public Health Service Act (PHSA), also known as the Harkin Law, passed by Congress in 2010. Put simply, the law aims to address insurers’ business practices that create inequities between how different provider types are treated by health plans. Of significant concern to AOA are the requirements for doctors of optometry to be credentialed with vision plans in order to secure a position on the medical plan panel; other provider types are generally not forced to meet this requirement.

The AOA is currently at a critical point in its advocacy. After years of federal regulators failing to enforce the law, in 2021 a provision of the No Surprises Act directed key federal agencies to issue rules fully implementing Section 2706(a) of the PHSA. To best advocate on behalf of the profession, the AOA needs information on the experiences of doctors and their patients.

Teri K. Geist, O.D., AOA trustee and board liaison to the AOA TPC, called on all doctors of optometry to make their voices heard and emphasized that federal agencies have specifically asked the AOA for additional data to understand how widespread payer practices create obstacles for patients accessing care. The AOA urges all doctors to provide information through a brief nondiscrimination survey.

Participate in the doctor discrimination survey.

Added Ronald L. Benner, O.D., AOA vice president and board liaison to the AOA TPC: “The Harkin Law, while we think of it as provider nondiscrimination, really protects patients who need and want eye health and vision care. You are the conduit for that—you can help us gather these stories so we can take these into the regulators and talk about how harm really has been done.”

Submit testimonials of patient harm (clinical or financial) or inconvenience from plan discrimination.

Interested in learning more about the AOA Payer Advocacy Summit topics? Session recordings from the meeting, including an update on compliancy issues, such as HIPAA, the ADA, and the Stark Law and Anti-Kickback Statute, and billing and coding, will be available on AOA’s EyeLearn Professional Development Hub in the weeks following the event.

In late 2021, Congress approved AOA-backed legislation delaying a trio of statutory reductions to Medicare pay, including a 4% Pay-As-You-Go cut, a 2% Medicare sequester cut and most of a 3.75% Medicare Physician Fee Schedule (PFS) cut. While the patch provided an offsetting 3% increase to the PFS, some of the remaining statutory cuts have begun to take effect and could balloon even further in late 2022 or 2023 without congressional action. Such is the case, advocates called on their representatives to pursue meaningful fee payment reform and help avert further cuts.

Separately, optometry’s advocates urged lawmakers to join with leading Veterans Service Organizations and their bipartisan colleagues to encourage the VA to continue ensuring veterans have access to the full range of eye care they need. The appeal comes after the VA took important steps to bolster veteran access in 2020 with repeal of a long-standing policy that limited veterans access to therapeutic laser eye procedures provided by optometry.

Now, the VA is working to develop national practice standards (NPS) for its health care workforce, including doctors of optometry. Advocates are encouraging the VA to ensure these NPS are written to the highest level of scope permitted for optometry and already provided to patients covered under all major private payers and other federal programs.

The Contact Lens Prescription Verification Modernization Act, H.R. 3353/ S. 1784, would reform the prescription verification process to eliminate the use of “robocalls” to confirm patient information and address online sellers’ attempts to skirt requirements of the Contact Lens Rule. Advocates’ ask comes only a couple months after leading members of Congress successfully requested the Government Accountability Office report on potential holes in regulatory oversight of DTC contact lens sellers, and after the Federal Trade Commission and Department of Justice penalized Hubble contacts to the tune of $3.5 million for taking advantage of consumers.

The AOA recognized several of optometry’s champions on Capitol Hill with AOA Health Care Leadership Awards, related to their tireless efforts to advance eye health and vision care in America, including:

Monday’s political luncheon featured keynote speaker Chris Stirewalt. The former politics editor for the Fox News Channel and a lively political commentator, Stirewalt offered candid and witty insights on the current pollical climate and the latest happenings on Capitol Hill and in the White House. Stirewalt’s keynote presentation will be available for members’ review in the AOA on Capitol Hill learning module on AOA EyeLearn.

The AOA recognized the crucial support of industry partners, including Visionary Supporters Johnson & Johnson Vision, EssilorLuxottica, Allergan and Alcon, as well as supporters, CooperVision and the Health Care Alliance for Patient Safety.

The joint AOA on Capitol Hill and AOA Payer Advocacy Summit may be over, but optometry’s advocates are just getting started. Help build on the momentum that our profession’s advocates built in Washington, D.C.—here’s how you can get involved:

For more information or questions about the AOA’s advocacy into these important issues, please contact the AOA’s federal advocacy team at advocacy@aoa.org.

Select portions of AOA on Capitol Hill, including the federal legislative briefing and issues overview, are available on AOA EyeLearn. Additional event recordings will be available in the coming weeks.