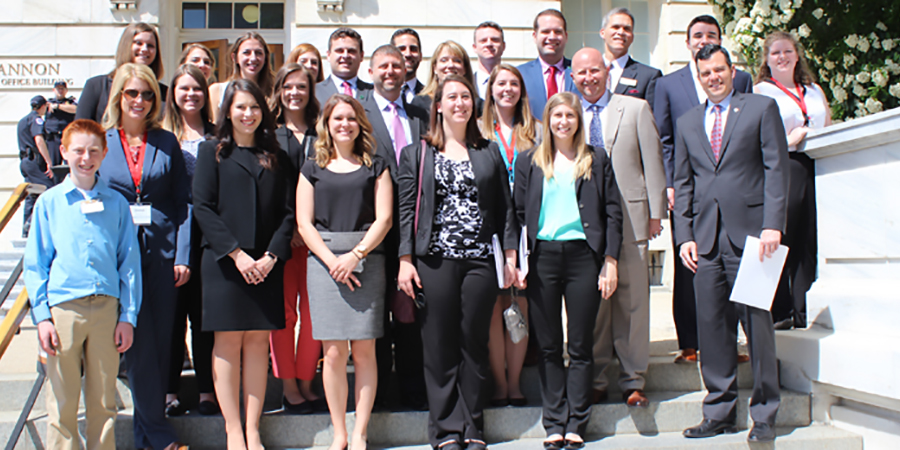 Ohio Optometric Association members and students pose on the steps of the Cannon House Office Building on Capitol Hill.

Advocates took a united message directly to Capitol Hill and federal agency officials this week—that AOA doctors and students will do whatever it takes to better safeguard patient health and ensure that millions more Americans have expanded access to the doctor of optometry-provided comprehensive eye and vision health care services that they need.

More than 600 AOA-member doctors and students convened in Washington, D.C., April 17-19, as part of the 2016 AOA Congressional Advocacy Conference to focus the national spotlight on the needs of patients and advocate for the profession's top priorities, including better safeguarding contact lens wearers against increasing abuses of online resellers, confronting anti-patient, anti-doctor vision and health plan mandates, and ensuring that more Americans—including our nation's veterans—have access to the primary eye and vision health care services that doctors of optometry provide.

AOA engaged multiple stakeholders directly in a special health policy listening session, sponsored by Alcon and Johnson & Johnson Vision Care, focused on voicing concerns for contact lens patients, both in their wear and care of such medical devices, as well as the unscrupulous manner in which some online contact lens sellers conduct business.

Contact lenses are FDA-regulated, Class II and Class III, medical devices that are safe when worn properly, but can easily lead to complications when abused. Doctors understand the benefits and risks of wearing contact lenses, and too many have had to treat patients with injuries resulting from improper use, AOA Past President David A. Cockrell, O.D., told participants.

Dr. Cockrell asked all doctors in the audience to stand. He then asked all of those who had never seen an adverse patient event stemming from a contact lens to sit. Not a single doctor took a seat.

"Maybe it's the teenager who purchased a decorative contact lens at the local gas station on spring break, or the patient who hasn't received needed medical care, suffering from neovascularization because they're wearing a lens with the same prescription over and over from an online retailer that keeps filling that expired prescription. These are incidents that are painful for patients, upsetting for doctors and the frustrating part is most of the time they could've been prevented," AOA President Steven A. Loomis, O.D., said.

"When a bottom line-driven retailer attempts to disrupt the doctor-patient relationship and downplay the importance of the eye examination, we know that patients fail to get the information they need, and they fail to develop a relationship with a doctor to serve them well," Dr. Loomis said.

Representatives from the FDA and CDC stressed their multimedia campaigns to fight poor contact lens hygiene and illegal sales, while the FTC noted their recent efforts to enforce the Fairness to Contact Lens Consumers Act (FCLCA) and Contact Lens Rule. Industry reinforced the importance of the doctor-patient relationship and preventing contact lens deregulation, while the National Consumers League bolstered their support for strict enforcement of the FCLCA.

"We face many challenges in front of us, but we strive to provide our citizens with optimal vision and eye comfort," said Jeff Walline, O.D., Ph.D., AOA Contact Lens and Cornea Section chair. "We ask that you help us by joining the fight."

Look for more about the health policy listening session in the July/August edition of  AOA Focus.

Additionally, optometry's advocates worked to build support for AOA-priority bills on Capitol Hill. Among these included the national push to restrict anti-patient, anti-competitive health and vision plan abuses, strengthened by a new study.

In a news conference on Capitol Hill, Avalon Health Economics—with the AOA and ADA—presented the findings of a new study looking at the impact of NCS provisions of vision and dental plans, or the absence of such provisions, on patients' true costs in North Carolina and Texas, states which recently enacted laws prohibiting plans from forcing providers to adhere to NCS mandates. The study authors describe the concentrated nature of the vision plan market and note their findings that while a monopsony—an economic term for a single or concentrated buyer interfacing with many sellers—is usually desirable for a consumer if providers were "overcharging;" in this instance, the plans' monopsony-like behavior is only benefiting plans themselves.

"NCS mandates have another effect—they lead to higher overall costs for these consumers and, did especially, for all other consumers in the market as doctors were forced to compensate for the 'transfer' of operating margins to the plans," the study brief from Avalon states.

Two additional bills were addressed at the conference, including:

Even if you weren't able to attend the congressional conference, there's still time to capitalize on your colleagues' momentum. Visit the  AOA's Online Legislative Action Center to read more or take action on H.R. 3323, H.R. 1312/S. 898, and H.R. 1688. Doctors can select any of the legislation and send an electronic letter to their legislators, urging support on the bill.

"We are now advancing legislation," Dr. Loomis told attendees. "We are on the offensive now, instead of the defensive."

Annually, the AOA Advocacy Group honors legislators and government officials who advance efforts related to eye and vision care with AOA Health Care Leadership Awards. Some of these awards were presented Tuesday during the Breakfast with Optometry's Champions. This year's awardees included:

Representatives spoke to the importance of citizen activism in the political process and several spoke to their own personal stories of how doctors of optometry made a difference in their lives.