August 31, 2020
The AOA continues to create opportunities for paraoptometrics to be all they can be—readying them for the effects of scope expansion and empowering them as grassroots advocates for the profession of optometry. And for the first time, paraoptometrics can join the single-largest annual advocacy event and the centerpiece of the profession's national lobbying efforts. 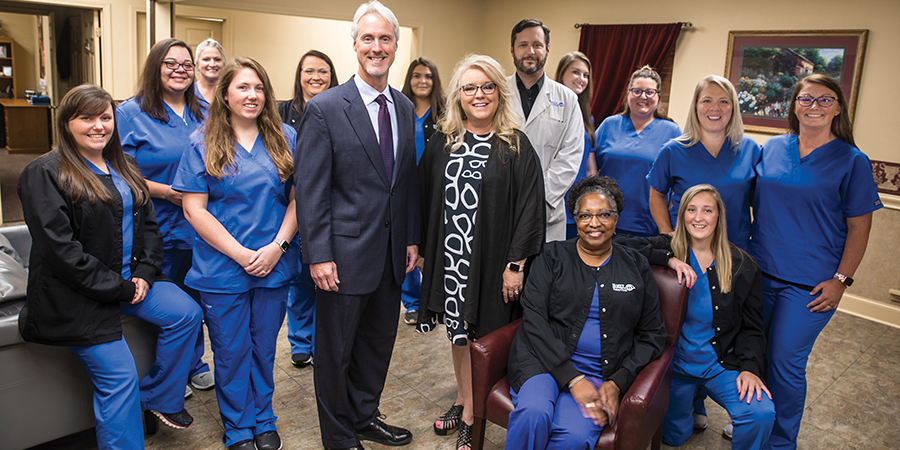 Excerpted from the July/Aug 2020 edition of AOA Focus.

Theirs was a chance meeting. Beverly Roberts, CPOT, longtime clinic director at Family Vision Clinic in

Magee, Mississippi, was attending her state affiliate’s 2019 conference when she bumped into Dana Reason, a regional advocacy liaison for the AOA. After introductions, the two strangers were soon talking about how they might collaborate.

Adds Reason, “That was really my first conversation with a para. Afterward, I thought: Mississippi is going for scope. There’s got to be a way to involve this amazing network of people who are so knowledgeable about the profession.”

One conversation led to another and another, culminating in collaborations that elevated the paraoptometric presence to advocates in that state’s heated scope of practice battle. What if they could leverage the paraoptometrics’ passion for the profession into legislative and advocacy efforts?

As optometric scope of practice continues to allow doctors of optometry to practice at the top of their license—utilizing the fullest extent of their education and training to meet the increasing demands on the U.S. health care system—optometric staff shouldn’t be overlooked.

Increased responsibilities, procedures and demands on doctors of optometry translate into a greater need for proven, skilled support on the part of paraoptometric staff.

“You have to trust in your paraoptometric staff to be better educated, to be more professional and to do more of the testing,” says Dr. Reynolds, noting that technology has enabled paraoptometrics to perform testing once done solely by doctors. “Paraoptometrics have to become the information gatherers. They have to be the ones doing the testing.”

Investing in staff has payoffs for practices, Dr. Reynolds says, referring to doctors who might be hesitant in the investment due to staff turnover. But can you afford not to make the investment, he asks.

“The more they can do, the more they produce,” Dr. Reynolds says. “And everyone wants to do something valuable, to be valued.

“That’s why it’s so important that paraoptometrics become certified,” he adds. “I think we’re just seeing the tip of the iceberg. As practices evolve, I think you’re going to see techs play more integral roles in practices.”

You might say Stacey Thibodeau, CPOT, CPOC, chair of the Commission on Paraoptometric Certification (CPC), is “Exhibit A” of how certification can help build a career.

The ink on Thibodeau’s biology diploma was barely dry when she got an eye examination shortly after her college graduation. She’s never looked back. The eye doctor examining her asked to see her resume and she was hired. Thibodeau has worked in the same Appleton, Wisconsin, practice for 24 years.

The CPC prepares and administers, with the assistance of the Professional Testing Corporation, the examinations for certification. The AOA, through its Paraoptometric Resource Center, provides educational resources for paraoptometrics’ certification.

“Through certification, paraoptometrics can prove their worth to their practice, keep engaged with changes in the profession, advance their careers and feel confidant doing their jobs on a daily basis,” says Thibodeau, office manager at her practice.

The certifications have earned the respect of doctors and patients. Patients often ask about her credentials, which are displayed on the wall in the practice.

Certification can chart and change the course of careers, Rodriguez says. Certified staff members are assets to their practices, as they take on more routine and technological responsibilities, on top of the unique relationships they have with patients.

The AOA provides a variety of resources to help doctors of optometry develop staff.

Through EyeLearn: Professional Development Hub, paraoptometric staff and doctors can access continuing education courses and professional development. At Optometry’s Meeting® over the past several years and this summer at the first- of-its-kind, real-time AOA 2020 Virtual Learning Livecast, paraoptometric-focused education courses and joint doctor-para courses were offered.

Those Roberts-Reason conversations blossomed into a pilot program to grow paraoptometric champions. They would also reach out to the state affiliate, the Mississippi Optometric Association (MOA), and its Executive Director, Linda Aldy. They all shared a vision for the paraoptometrics, who for years have regularly attended the MOA’s meetings and continuing education.

“It was definitely a combined effort,” Reason says.

Says Aldy: “The paras and the doctors of optometry have always worked well together.”

Still for every doctor of optometry, there are 4.8 paraoptometric staff members, according to a 2016 AOA survey (the most recent year data was available). Many paraoptometrics are active in the communities they live in. Their children may go to school with the children of state lawmakers. Their families may attend the same church or shop at the same stores. Imagine then, Roberts says, how they could extend the reach of the lobbying efforts of doctors of optometry for scope expansion.

“We are not politicians,” Roberts says.

But paraoptometrics care about the vitality of their practices and eye health of their communities, she adds. So, once they got buy-in for the parties involved, they developed a plan. First, they had to educate paraoptometrics on the issues and organize volunteers to the cause. Second, they came up with a strategy on how to make their voices heard, whether financially or on the legislative front, particularly in areas of the state where support might be weakest for scope expansion.

Reason, meanwhile, helped the paraoptometrics with developing their messaging, whether delivered by letter, phone or in person at the state’s legislative lobbying day. “We built a solid foundation,” Roberts says.

And the outcome for their collaborations?

“They bring that numerical strength, backing up the doctors,” Aldy says,

Passion and professionalism, too. “They have tremendous buy-in,” she adds.

The pilot program is currently on hold due to the COVID-19 pandemic. However, its organizers termed it a success, even though Mississippi’s scope bill didn’t make it out of committee. They’ll be back, Aldy says.

In this historic and unprecedented year, the single-largest annual advocacy event and the centerpiece of the profession's national lobbying efforts is going virtual, Sept. 9-10—and for the first time ever, paraoptometrics can join. The Virtual AOA on Capitol Hill is about maximizing connections with elected federal representatives. The tremendous growth of AOA on Capitol Hill—from fewer than 200 doctors attending a decade ago to more than 500 doctors and students—is a key reason why the AOA is recognized as one of the most effective, respected lobbying groups in the nation's capital.

Participation is open to all advocacy-minded members with sessions tailored around providing attendees time, in close coordination with their state associations, to pre-arrange and participate in virtual meetings with U.S. Senators and House members.

“During these past six years, the AOA has been focusing on increasing awareness of paraoptometry and its important professional role within the optometric family,” Rodriguez says. “As AOA associate members, paraoptometrics now have the opportunity to be more involved as volunteers within the AOA committee structures and work together with member doctors to reach common goals.

“Throughout these years, we have seen greater emphasis on increasing paraoptometric professional development and educational growth, opportunities to be a voice within the optometric community and encouragement to participate as advocates for the optometric profession,” Rodriguez adds. “In today’s changing health care environment, a successful practice relies on a strong team of trained and dedicated professionals. As AOA associate-member paraoptometrics, we are now able to access all the necessary tools and resources that will best prepare us to efficiently fulfill that role.”

September marks Paraoptometric Month, the only formal observance dedicated to honor optometric practice staff—so make the most of it.