July 8, 2021
With the recent retirement of John Townsend, O.D., as head of the VA’s Optometry Service, the Armed Forces Optometric Society and the AOA look forward to working together on continuing to build up access and care for veterans and their families. 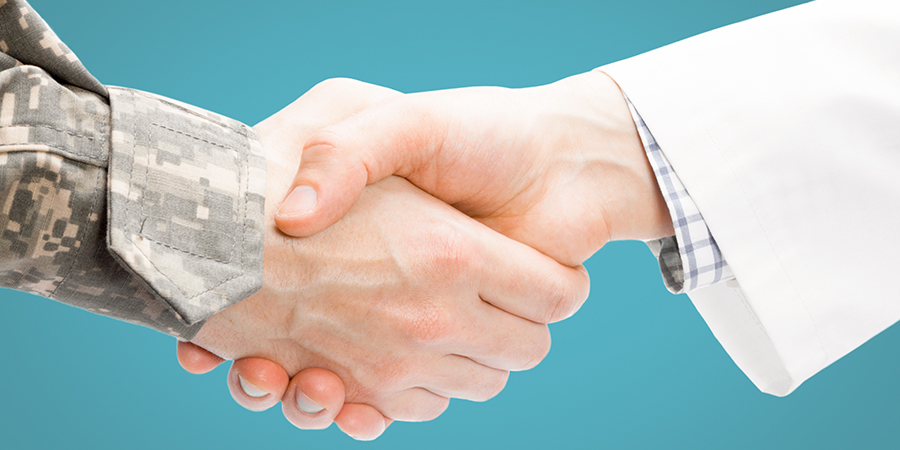 Before adjourning, the AOA House of Delegates at the 2021 Optometry’s Meeting ® was asked to acknowledge the service of John Townsend, O.D., who headed the Optometry Service for the Department of Veterans Affairs (VA) for over two decades.

The Armed Forces Optometric Society (AFOS) saluted Townsend’s service with a letter read to all delegates and the AOA Board of Trustees. The letter congratulated Townsend on his service to the profession, including:

Dr. Townsend previously served as chair of the Clinical Guidelines Coordinating Committee for the AOA, representative to the American National Standards Institute Committee Z80 for Ophthalmic Standards affiliate member of the Association of Schools and Colleges of Optometry, as well as affiliations with the National Eye Health Education Program, National Eye Institute, and National Institutes of Health. Further, he was inducted as a Distinguished Practitioner into the National Academy of Practice in Optometry within the National Academies of Practice.

“Dr. Townsend has worked tirelessly to grow the profession of optometry within the VA over his 20+ years as director of VA optometry services,” says Carla Engelke, O.D., past AFOS president. “Through the years, he has fostered a vital relationship with AFOS and the AOA that is a reflection of his dedication to the advancement of federal-service optometry. His wisdom will be missed, and I wish him well on his deserved retirement.

“AFOS looks forward to working with his successor on issues affecting the care of veterans and their families,” Dr. Engelke says.

AFOS, working with the AOA, has worked to advance the profession by pushing for doctors of optometry to practice at the fullest scope of their education and training and fighting for recognition of their role in the eye health and vision care of the country’s veterans.

Among their most recent achievements:

During the scope battles of the 1970s through the 1990s over the use of therapeutic drugs and ophthalmic drugs for diagnostic purposes, AFOS and military services worked with the Pennsylvania College of Optometry to train and certify doctors of optometry in diagnostic and therapeutic pharmaceuticals. Doctors in the military had gotten those drug privileges before civilian doctors and worked on behalf of the entire profession to gain the same for all.

And during those not-so-distant scope battles, AFOS and the AOA successfully fought to remove optometry from under the supervision of ophthalmology and establish a separate service within military medical departments. Many states later utilized this new structure to ward off attempts to have optometry be under ophthalmology in state licensing laws.

Dr. Townsend continued fighting for increased veteran access to doctors of optometry up to and including the day he retired. He continued working hard to position optometry for the forthcoming VA National Practice Standards, which are being created to aid implementation of the new VA-Department of Defense electronic health records system. The new practice standards will outline the services a VA doctor of optometry may or may not perform and could have an outsized impact on future state scope of practice battles.

The American Medical Association and ophthalmology, recognizing the impact the new standards could have on state scope battles, are calling on VA officials to align the new standards with the most restrictive state scope of practice for optometry. However, lawmakers and veteran advocates know what is at stake for veterans and are pushing back against organized medicine. So far, leading members of the U.S. House Veterans Affairs Committee and the House Appropriations VA Subcommittee have joined with one of the oldest and most respected national veteran service organizations, AMVETS, in demanding that VA make the new standards as broad and inclusive as possible for doctors of optometry.

The AOA expects the practice standards to be finalized in the coming months. To learn more and to find out how you can help, including by connecting with your members of Congress and urging that they join the AOA and their state’s veterans in this fight, please contact advocacy@aoa.org. Learn more on how you can help expand access to needed care.