March 24, 2021
The federal recognition of optometry’s utility in current COVID-19 vaccination efforts comes after weeks of AOA advocacy. Here’s how to get started. 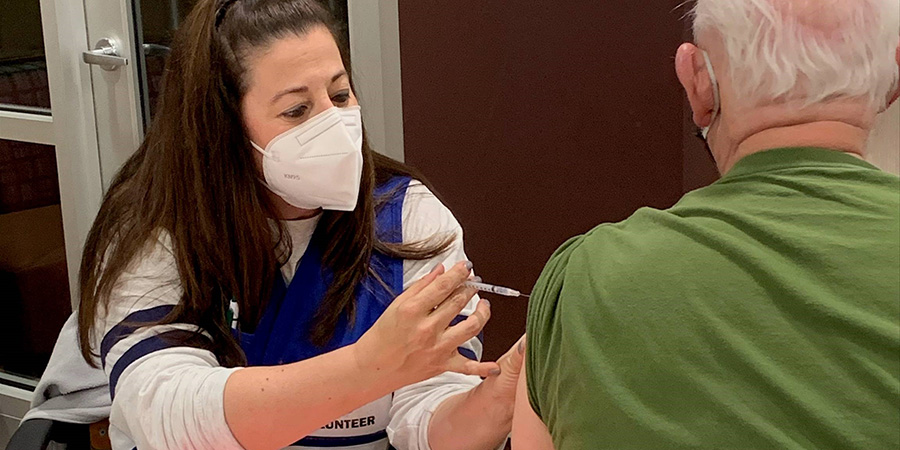 Elizabeth Muckley, O.D., Ohio Optometric Association immediate past president and a Medical Reserve Corps volunteer, administers a COVID-19 inoculation during a vaccination event in Portage County on March 13. Although the state of Ohio individually approved optometry as COVID-19 vaccinators, a recent HHS decision to expand eligibility under the PREP Act opened the possibility for doctors of optometry nationwide to volunteer.

Even as U.S. COVID-19 cases decline to the lowest point in months, federal health officials warn a fourth surge is still possible and consequently intensified vaccination efforts by expanding the pool of eligible vaccinators to include optometry.

On March 12, the Department of Health and Human Services (HHS) used its authority under the Public Readiness and Emergency Preparedness (PREP) Act to add additional categories of qualified health care providers authorized to prescribe, dispense and administer U.S. Food and Drug Administration (FDA)-approved COVID-19 vaccines, including doctors of optometry and eligible optometry students. For intents and purposes, the HHS’ expansion under the PREP Act federally recognizes optometry’s eligibility to serve as vaccinators and does preempt some state laws, but the current amendment includes provisions that defer to individual states, e.g., regarding additional training requirements. However, the HHS encourages states and territories to follow suit and expand their vaccinator workforce based on their local needs and availability of volunteers.

“As vaccine supply ramps up, we want to be sure communities have the help they need to get shots into arms for anyone in the U.S. who wants to be vaccinated against COVID-19,” noted Acting HHS Secretary Norris Cochran in an administration news release.

To become part of the expanded COVID-19 vaccine workforce, the HHS set up a website with additional information, including a fact sheet and digital toolkit. Doctors and students must complete the requisite training, subject to additional state or territory requirements, and register with their state or territory of residence through the Emergency System for the Advance Registration of Volunteer Health Professionals.

Ultimately, states and territories will dictate how available vaccinators will be utilized—some vaccinators may not be called to serve—but the PREP Act prevents states or territories from excluding optometry entirely. The landmark authorization comes after weeks of AOA advocacy to encourage optometry’s eligibility, citing the profession’s widespread geographic accessibility and clinical proficiencies, and not a moment too soon.

Since December, the U.S. has administered over 113 million vaccines—a fifth of Americans—mainly among priority phases and at-risk individuals. But now, as President Joe Biden’s administration pushes to open subsequent vaccination phases for all eligible adults no later than May 1, many more skilled health care workers are necessary to get those shots into arms with optometry given the opportunity to contribute to this herculean effort.

“The Biden administration’s action is an important recognition of optometry’s essential and expanding role in health care,” remarked AOA President William T. Reynolds, O.D., following President Biden’s announcement of the vaccinator expansion during a national address on March 11. “Since the pandemic’s earliest days, doctors of optometry have been providing urgent and emergent care and helping to ease the burden on hospital emergency departments. Now, by gaining the nationwide authority to administer vaccines that the AOA and AOSA were seeking, optometry will help our communities and our country recover and return as quickly as possible to health and safety.”

Even before Phase 1a vaccinations began among health care workers, the AOA maintained a constant refrain not only that doctors of optometry should be deemed essential health care workers among priority vaccine phases but also that the profession was ready, willing and able to bolster the forthcoming U.S. vaccination campaign. In fact, the AOA first issued a letter to HHS in December 2020 that reiterated doctors’ ability to assist the vaccination rollout and supported an HHS directive to states to “assess the provider types that can administer immunizations,” citing optometry’s widespread accessibility and skills proficiencies.

Overall, more than 90% of the Medicare beneficiary population live within 15 minutes of a doctor of optometry, and a growing number of states already authorized optometry to administer injections, including at least eight states that specifically authorized optometry as COVID-19 vaccinators. These were points the AOA emphasized as recently as early March when Congress passed the latest COVID-19 aid and relief package, especially striking a chord with Rep. Yvette Clarke, D-N.Y. The Congresswoman encouraged HHS to authorize optometry as vaccinators, helping bolster vaccine coverage among traditionally underrepresented communities, and subsequently applauded the expansion, along with 20 other lawmakers, just days later.

“This authority provides a range of communities with quick, safe and easy access to these vital vaccinations,” Rep. Clarke’s letter reads. “Doctors of optometry, and a range of other trained health care professionals, are fully trained to provide injections and are well situated geographically to be able to reach individuals in rural counties and urban areas with underserved populations, including our most vulnerable—seniors and those on public safety net programs.

“We strongly believe that this declaration by HHS under the PREP Act will allow medical professionals across the country to join their colleagues already on the front lines in a growing number of states that have already granted expanded vaccination authority.”

One of those states is Ohio, where the state public health department made an appeal mid-February for all available volunteer medical professionals to mobilize in support of vaccination sites. Elizabeth Muckley, O.D., Ohio Optometric Association immediate past president and a state Medical Reserve Corp (MRC) volunteer, took up that call and was detailed for a mass vaccination site at Northeast Ohio Medical University only days later.

In the weeks since, and as more public eligibility tiers opened, Dr. Muckley once again found herself answering an MRC mobilization for a mass vaccination clinic on March 13. This time, Dr. Muckley rotated through the vaccination station where she administered inoculations alongside a registered nurse, in turn gaining approval from the county chief as a vaccinator.

“As doctors of optometry, we know that we have an impact on the daily lives of the patients we treat by preserving their vision,” Dr. Muckley says. “But, when you give that vaccine over and over, you know you have an even larger role in the medical community in helping to end this pandemic so people can get back to enjoying life free from fear and isolation.”

Not to be lost is the fact that federal recognition and individual states’ decisions to authorize optometry for COVID-19 vaccinations represents a landmark moment for the profession, too, adds Dr. Muckley.

“Through our advocacy efforts we have been working toward this recognition that we are not only primary eye care providers but also highly trained medical providers, acknowledged by policymakers as well as the public,” she says.

Prior to the HHS’ PREP Act expansion, at least nine states had explicitly granted doctors of optometry authority to administer COVID-19 vaccines, including:

Even now, multiple states are working with their state administrations to underscore optometry’s availability as vaccinators. To learn more about COVID-19 vaccines and optometry’s role, access the #AskAOA Update on COVID Vaccines, available on the AOA's EyeLearn: Professional Development Hub, or the AOA’s fact sheet.

How to join the expanded COVID-19 vaccine workforce