March 8, 2018
More than 60 strong, AOA-member doctors and future doctors of optometry, representing the more than 41 million contact lens patients across the U.S., descended March 7 on Washington D.C., to make optometry’s message heard loud and clear to the Federal Trade Commission 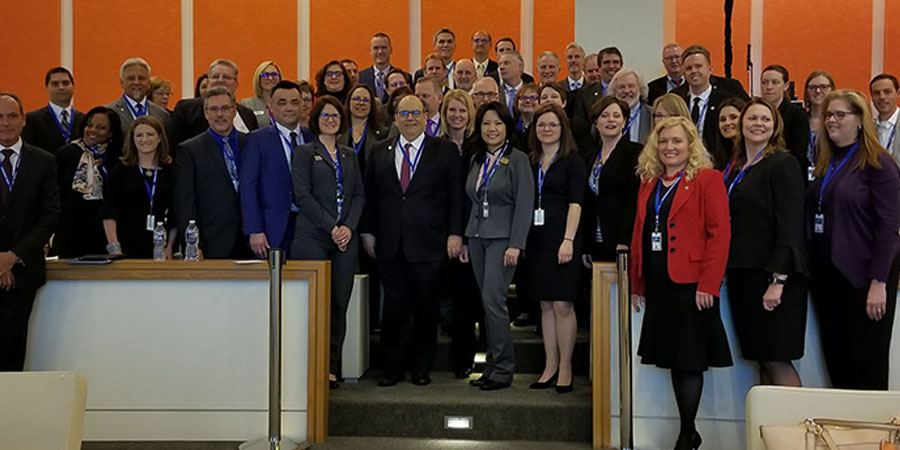 More than 60 strong, AOA-member doctors and future doctors of optometry, representing the more than 41 million contact lens patients across the U.S., descended March 7 on Washington D.C., to make optometry's message heard loud and clear to the Federal Trade Commission:

We need to reduce the administrative burden, so we can get back to taking care of patients.

The AOA has long held that the Federal Trade Commission's (FTC) proposed changes to the Contact Lens Rule undermine the doctor-patient relationship, impose needless, burdensome requirements on eye doctors, and gives short shrift to the threat posed by online contact lens retailers who subvert the law and put patient safety at risk. During the agency's forum on contact lenses, their safety, the marketplace and prescriptions, doctors and industry alike took the opportunity to underscore the shortsighted proposal and the need for long-term patient health-focused solutions.

"I'd like to recognize all the AOA members from across the country," Dr. Cockrell said during his remarks on a panel looking at the verification of patient prescriptions by online sellers. "This is such an important issue for us we wanted to make sure our voice is heard."

After the hearing broke, AOA members headed to Capitol Hill to brief members of Congress.

The FTC first published its proposed rule changes to the Contact Lens Rule in November 2016. Among the proposals is a paperwork mandate that would require contact lens prescribers—including doctors of optometry and ophthalmologists—to obtain a signed patient acknowledgment receipt with each new contact lens prescription, and keep that document on file for at least three years to aid in future federal investigations.

Although the FTC argues its proposal helps educate patients of their rights and ensure they aren't denied their prescriptions, in turn reducing the need for an important prescription verification safety check, the FTC's own data shows a relatively small number of complaints related to this issue.

The AOA was represented by Dr. Cockrell on the verification process panel and Dr. McCarty who joined Dr. Cockrell on the prescription release and consumer choice panel. Both shared clear facts regarding the flaws of the proposed changes, meaningful alternatives, and compelling stories about their experiences.

Asked how he thought the verification system is working now, Dr. Cockrell responded, "The verification process, as it stands right now, is ineffective. It doesn't work. It's a one-way system."

Doctors and their offices are contacted daily with sellers seeking to verify prescriptions that are frequently expired and contain incorrect patient information. The verification requests typically come in via fax or robocalls, Dr. Cockrell told the FTC. The problem, he added, is that there is no way to reconnect with the retailers when verification is sought or often the messages on the automated calls are garbled. His office works hard to respond to the verifications within the 8-hour window required by the law, he said. And there is no notice or confirmation from the sellers if they have followed his request to correct a prescription or to cancel if the patient's prescription is expired, he added.

"I agree with Dr. Cockrell," said Dr. Steinemann, who had conducted his own survey of error rates at sites he works with. "Verification framework is insufficient. It doesn't work and it's not properly enforced."

What would work better? he was asked.

Added Cockrell who supported two-way communications between the sellers and eye doctors: "If you really want to look after patient health care, I think it's important."

On the panel on prescription release and consumer choice, both doctors of optometry supported educating patients with signage and communication during patient visits, underscoring that they are entitled to copies of their prescriptions after a fitting and can get them filled with a retailer of their choice.

But Cockrell and McCarty took issue with certain recommendations offered up, based on their experiences, because they all ultimately divert from patient care and put a wedge in the doctor-patient relationship. In fact, according to a nationally representative survey of 1,000 U.S. contact lens wearers ages 18+, conducted by the American Optometric Association, in 2018: more than 8 in 10 contact lens wearers oppose additional government regulation of the doctor-patient relationship.

"Is it really necessary?" said Dr. Cockrell, who noted that patients in his office are aware of their right to request a copy of his prescription and also that the FTC had received relatively few complaints on the issue. He questioned whether the proposed FTC changes were necessitated by a real problem or whether it was a solution looking for a problem.

"The focus of the FTC should be on the real problem at hand—those online retailers who have been found to be lowering quality care standards for medical devices, using deceptive sales tactics and placing the public needlessly at risk. That's why the AOA and our member doctors and students from every state will be in the nation's capital in force to deliver our message loud and clear," says AOA President Christopher J. Quinn, O.D.

Said Dr. McCarty: "We need to reduce the administrative burden, so we can get back to taking care of patients."

AOA President Robert C. Layman, O.D., underscores AFOS and AOA support for national practice standards that allow doctors of optometry to operate “at the top of their license and training” and don’t limit veterans’ access to essential eye and vision care.