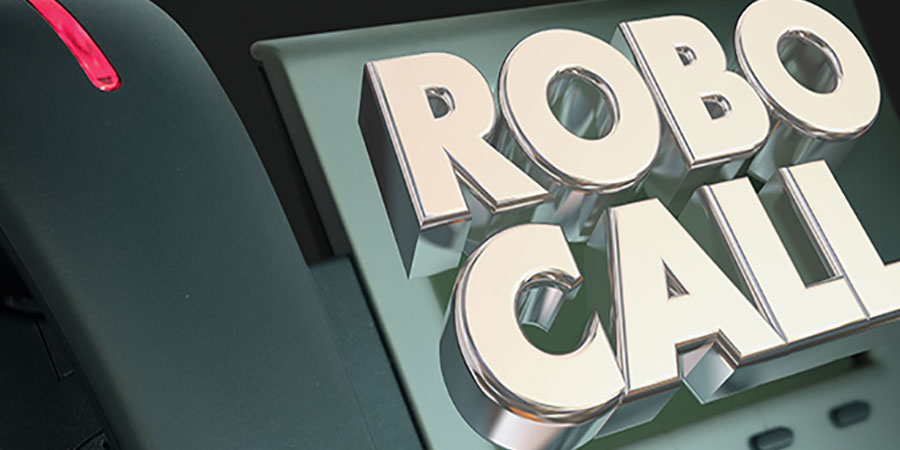 "No reputable company should be using repeated robocalls into physician offices to communicate on patient health and safety matters."

"No reputable company should be using repeated robocalls into physician offices to communicate on patient health and safety matters," says AOA President Barbara L. Horn, O.D. "With internet-based mass retailers failing to fix the problem, AOA doctors of optometry are pleased to see Congressmen Bobby Rush and Michael Burgess and other health policy leaders in Congress joining together on a bipartisan basis, along with the Health Care Alliance for Patient Safety, to close an outrageous robocall loophole that's undermining quality care and putting the public at risk."

Jointly backed by the AOA and the Health Care Alliance for Patient Safety (APS), the bipartisan H.R. 3975 would prohibit contact lens prescription verification made via robocall in favor of direct communication between online sellers and prescribers. This "direct communication" to confirm prescriptions could take the form of live phone calls, fax, patient portal or email with an aim of establishing a paper trail that ensures patients' prescriptions are legally valid and filled as ordered.

David Cockrell, O.D., AOA Advocacy Group chair, says Congress and federal agencies have been provided information about robocall abuses targeting doctors and patients for years, and now, other physician and patient advocacy organizations are likely to join in support of this bill.

Popular with roughly 45 million Americans, contact lenses are a safe, effective vision correction option when worn and cared for properly. However, poor-fitting or improperly used contact lenses can result in serious eye and vision conditions, which is why the U.S. Food and Drug Administration (FDA) regulates contact lenses as Class II and III medical devices that require an eye doctor's prescription and oversight. So, too, it's why the FDA and Centers for Disease Control and Prevention advise consumers that contact lenses are not "one-size-fits-all" and that regular, comprehensive eye examinations are necessary for ensuring optimal eye health.

Unfortunately, a 2016 consumer survey still found a third of contact lens consumers could purchase these medical devices using an expired prescription, while a quarter received an altogether different contact lens than was prescribed by their eye doctor. Although illegal under the Fairness to Contact Lens Consumers Act (FCLCA), these kinds of sales escape FTC enforcement and are perpetuated by online sellers' exploitation of a loophole in the prescription verification process.

Increasingly, online contact lens sellers utilize robocalls for prescription verification. But often these calls are difficult to understand; do not include all the necessary information for confirmation; and create barriers for doctors to communicate back the necessary prescription corrections, including that the request being made is for a wrong device or for an individual who is not a patient of the doctor. Some online sellers use the automated calls to take advantage of the current "passive verification" system—doctors have 8 hours to respond before a prescription is considered verified—to sell consumers a product not prescribed by their eye doctor.

While the FCLCA protects millions of Americans' right to purchase their contact lenses where they choose, it's also intended to safeguard patients' health. Therefore, congressional action is necessary to close these loopholes that risk patients' eyesight, says Deanna Alexander, O.D., APS chair.

"Increasing patients' choice in the contact lens marketplace should never jeopardize patient safety," Dr. Alexander says. "The Alliance thanks Congressman Rush and Congressman Burgess for the introduction of this thoughtful legislation that strengthens patient safety and addresses a loophole in the current passive verification system, which often leaves patients at risk of being provided incorrect prescriptions that can lead to adverse health conditions and even vision loss. We will continue to work with Congress to be a strong voice and advocate for patient health and safety."

In September, the APS was instrumental in securing report language accompanying the Senate Financial Services and General Government appropriations bill that bolsters the profession's advocacy around robocalls and challenges the FTC's definition of 'direct communication.' Led by Sens. John Kennedy, R-Louisiana; Chris Coons, D-Delaware; and John Boozman, O.D., R-Arkansas; the report language "urges the FTC to reevaluate its definition of direct communication and consider eliminating the use of automated telephone verification messages, to ensure an effective prescription verification process exists to allow the FTC to properly enforce the rule."

The report language is just one more way the AOA and APS members keep constant pressure on the FTC to address the abuses of online contact lens sellers. Concurrently, optometry's advocates continue a separate but altogether related pushback against proposed changes to the regulatory interpretation of the FCLCA—the FTC's Contact Lens Rule—that advocates argue are misguided and costly. Initially introduced in 2016, the proposed rule included no additional requirements for contact lens retailers while alternatively imposing additional administrative burdens on prescribers that could total as much as $18,000 per doctor, per year.

The AOA's advocacy efforts—buoyed by the voices of more than 100 U.S. House and Senate leaders—helped stop the FTC's initial proposal from being finalized. However, with the FTC release of supplementary rulemaking, AOA doctors and students once again jumped into action, helping to secure nearly 25 U.S. Senate signors to a bipartisan letter urging the FTC not to finalize its new confirmation of prescription release proposal. Yet, the FTC is now working to finalize its supplementary rulemaking. That's why the AOA encouraged thousands of AOA doctors of optometry and students to submit public comments to the FTC on the rule before the July 29, 2019, deadline.

Once again, optometry's advocates are called upon to act.

Here's how you can take part:

Visit the AOA Online Action Center, or text "AOA" to 855.465.5124 to access the Action Center directly from your mobile device, to view these priority issues and connect with your U.S. House members to encourage their support. Educate yourself on AOA's priority federal legislation and advocacy activities, such as H.R. 3975.

Consider investing in AOA-PAC, the only federal political action committee dedicated to fighting and winning for optometry.