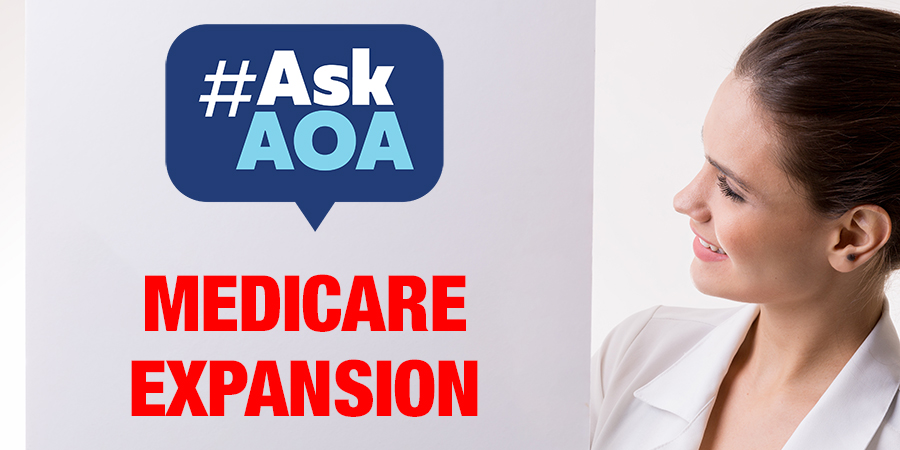 An upcoming #AskAOA webinar, at 9 p.m. ET, Thursday, July 29, will provide participants an overview of the proposed Medicare legislation, explanation of how the benefit expansion would work and offers an opportunity to help inform the AOA’s advocacy going forward.

Congressional plans to expand Medicare by adding a new refraction and materials benefit have drawn the AOA’s full advocacy mobilization with a special advisory committee convening in the days ahead to provide guidance on the sweeping legislation.

On July 13, Senate Democrats and the White House announced they would soon unveil a massive, $3.5 trillion budget resolution that includes spending on a historic Medicare expansion that would add new vision, hearing and dental coverage for the program’s roughly 62 million seniors and younger people with disabilities. The budget framework is not yet finalized, and specific proposals are likely to change as legislation progresses, but the White House and supportive majorities in Congress are actively working toward a program expansion that looks increasingly likely to pass through the budget reconciliation process.

“The next few months will be an extremely busy time,” noted Robert C. Layman, O.D., AOA president, in an all-member letter. “Through it all, as we take our message to the U.S. Capitol, the AOA will keep you informed and provide you with specific actions to help ensure that our profession is heard loud and clear throughout Washington, D.C., at each step of this process.”

Doctors of optometry annually see tens of millions of patient encounters with total reimbursement exceeding $1.5 billion, providing for the primary eye health care needs of Medicare beneficiaries. However, Medicare currently only provides coverage for a complete comprehensive exam if a medical condition is identified or present—and typically requires beneficiaries to pay 100% of costs for eyeglasses or contact lenses. Unfortunately, this creates conditions wherein many seniors either delay or completely forgo essential, annual eye health care.

Such is the case, the Congressional Budget Office projects that initial proposals for expanded coverage would permit earlier diagnosis and treatment of visual and systemic health threats, as well as increased billings for doctors of optometry and other physicians. Exact figures are still to be determined as a final bill may not be forthcoming until mid-to-late fall. Nonetheless, given the far-reaching effect that this coverage expansion would have, the AOA continues to work closely with leaders in Congress to proactively build support for optometry and provide essential input to the legislative process.

Toward that end, the AOA not only intends to provide members relevant information and details about the current legislative effort, but also needs to hear from members about how such an expansion could affect their practices. The AOA is immediately convening a videoconference in the coming week—open to all doctors, optometry students and paraoptometric staff—to discuss the full range of issues and help inform the work of the AOA’s board and advocacy team.

Moderated by AOA Quality Improvement and Data Committee member Jeff Michaels, O.D., this townhall-style #AskAOA webinar on Thursday, July 29, will form the basis of the AOA’s Special Advisory Committee on Medicare Expansion, convening periodically and providing a continual source of feedback in the months ahead.

“This is a benefit that can reshape how beneficiaries receive care for decades to come,” Dr. Michaels says. “The AOA is working hard to make sure AOA members are able to drive the highest standard of care with appropriate reimbursements in line with the education and training that doctors of optometry receive.”

Members’ feedback is especially critical as insurers and discount plans look to shape these new benefits and shift the debate away from quality care. However, the AOA remains at the forefront of Capitol Hill conversations regarding any Medicare vision benefit expansion in either chamber of Congress.

Over a third of Medicare beneficiaries have vision problems, yet more than half (57%) fail to receive a yearly eye examination. Such is the case; the AOA is a leading proponent for policy recommendations focused on optometry’s essential role in meeting the needs of Medicare patients and the importance of the doctor-patient relationship in delivering healthy outcomes.

In May, optometry’s advocates, participating in over 300 congressional meetings with lawmakers and their staffs as part of the Virtual AOA on Capitol Hill, championed the profession’s priorities and concerns in legislative efforts coalescing at that time to expand the Medicare vision benefit. And there’s evidence that optometry’s voice is being heard with proponents in the House and Senate casting their support behind Medicare expansion efforts.

“The AOA will continue fighting for our rightful seat at the table as Congress over the next few weeks and months considers the creation of a new refraction and materials benefit under traditional Medicare,” noted AOA Federal Relations Committee member Deanna Alexander, O.D., during a Virtual AOA on Capitol Hill issues briefing.

“We know that our combined advocacy will be key to getting this potential benefit right, especially considering that some insurers and other payers are already trying to gain control of it, impose enforced restrictions on the professional judgement and authority of doctors, and segment vision from overall patient health.”

Such a significant expansion requires thoughtful consideration, which is why when Congress first took up the issue in December 2019, the AOA diligently provided input to ensure the benefit expansion accomplished what it purported to provide. Now, the AOA once again is poised to help shape consequential Medicare legislation and members’ input is needed to help guide advocacy.

Learn more about supporting the AOA’s advocacy, including by becoming an AOA-PAC investor, one of the easiest and most effective ways to make an impact in the AOA’s ongoing federal advocacy efforts.