March 18, 2021
Abrupt schedule and fee changes, limited availabilities and a lack of advanced communication draw criticism from students and a word of warning that confidence is fading in the testing agency. 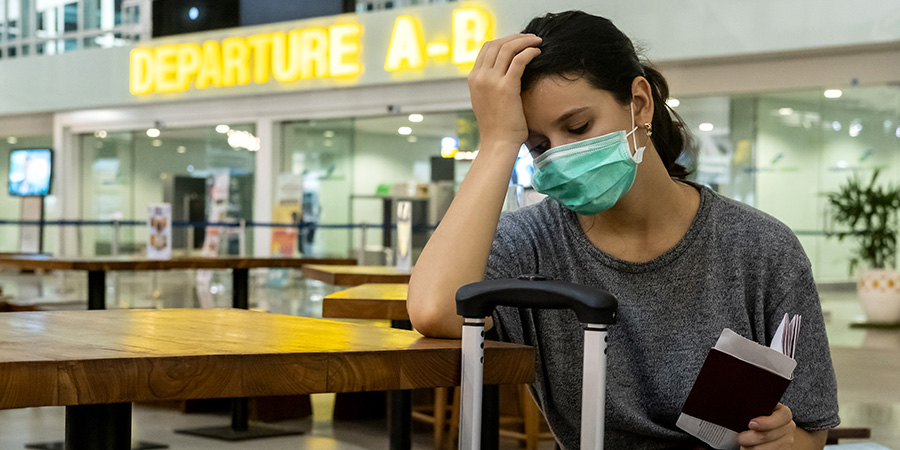 Like countless other optometry students, Elizabeth stared attentively at a computer screen as midnight neared to register for a rescheduled Part I Applied Basic Science exam. This time, Elizabeth—whose full name the AOA agreed to withhold for anonymity—was determined to get a slot, considering her original March 2020 exam was canceled the night before due to COVID-19 lockdowns. But even in August, it still wasn’t meant to be for many.

“All the optometry students in the country, we’re all up and ready to book our dates that night and the system wasn’t working,” Elizabeth recalls. “My classmates and I, we’re all panicking—can anybody get in? And when it finally opened at 1 or 2 in the morning, there were hardly any spots anywhere.”

Not to be defeated, the northeastern optometry school student selected the nearest available slot—in Ohio. For Elizabeth, that meant a lengthy car drive. But for a classmate, the nearest available slot meant a flight to Salt Lake City, Utah. Others could not even find local dates until November, expressing concerns about air travel during a pandemic. That added stress, while dealing with COVID-19 to boot, did not bode well for test results.

So, when it came time to take the Part III exam, Elizabeth was ready—that is, until receiving a positive COVID-19 test the same week as the test. Now, Elizabeth and numerous other students set to graduate in less than two months are clamoring over a truncated, three-day-per-week exam schedule (with one Saturday per month) the same month as their graduation.

“I know of people right now who are going into residencies, and they don’t even know what to do because so many of the Class of 2021 still hasn’t even taken all their boards,” she says. “It’s frustrating because exams open for the Class of 2022 soon and we’ll all be competing for spots.”

It could be worse, Elizabeth admits: that classmate who ended up in Salt Lake City ultimately had to schedule a retake at the next-closest location, once again, several states away.

“We understand it’s a pandemic, but we want to feel that our board of examiners is backing us and that’s not the case right now,” she says. “It almost feels like they’re making it more difficult to get licensed when that shouldn’t be the case.”

Since the beginning of the coronavirus outbreak, the National Board of Examiners in Optometry (NBEO) has scrambled to manage and adjust its national testing schedule as government lockdowns, travel and occupancy restrictions precipitated numerous postponements of the three-part exam, including the latter session requiring in-person assessment at the board’s Charlotte, N.C., location. While the NBEO instituted a task force to investigate testing alternatives during the pandemic, optometry students argue the solutions posited represent a too-little-too-late approach. And, when viewed through the lens of recent issues, are only breeding exasperation and resentment.

“It is frustrating to realize that, despite open discussions between the National Board of Examiners and the American Optometric Student Association (AOSA) leadership over the past year, NBEO has made minimal effort to effect changes,” reads a formal letter to the NBEO from AOSA President Alex Bennett.

Furthermore, Bennett adds, the lack of effort on the NBEO’s part “in effect, continues to undermine doctor education and patient care.”

Issued to the NBEO on Feb. 23, the AOSA letter is the culmination of students’ frustrations over the inflexibility of the boards’ scheduling throughout the pandemic-challenged 2020 academic year and into the current spring 2021 term. What’s more, the board’s recent handling of sudden testing changes without sufficient notification and an exam fee increase during the public health emergency prompted the AOSA to openly question the NBEO’s 2020 commitment to proactive communication with students and financial transparency.

Specifically, the AOSA letter cites an instance in mid-February 2021 where students were given only a few hours’ notice that the registration date for the Part III exam was changed from Monday, Feb. 15, to Friday, Feb. 12, and only notified after students had already been informed of the original date. Considering the $985 cost associated with the exam, in addition to travel and housing costs that may include airfare across the country, optometry students must plan well in advance to have funds available on the date of their registration. Additionally, for students who may have been in class or clinic that Friday when the NBEO email was sent, testing slots were already booked by the time they realized the date change.

“Students plan their time and resources around key milestones and by changing the registration date with limited notice, they were ill-prepared to sign up for the first-come, first-served enrollment and may not have had their funding prepared,” the AOSA letter notes. “It is unfortunate to learn that the NBEO failed to provide students adequate time to prepare for the change.”

The inadequate communication comes as the AOSA has offered to serve as an additional conduit to students, working in coordination with schools and colleges of optometry to provide the broadest dissemination possible. However, the date change was issued simultaneously to the AOSA and students without an opportunity to raise concerns.

Lastly, the AOSA letter made an appeal for financial transparency at the testing agency considering a 30% increase in cost per exam over the past three years, including a $35 fee increase scheduled to take effect on Feb. 15 that was “spontaneously” changed to Feb. 12 with only hours’ notice.

On March 9, the NBEO responded to the AOSA concerns and expressed a desire to constructively engage students over the optometric examination process. The NBEO reiterated that date changes are subject to the board’s discretion and regretted that recent communications “were poorly received.” While reiterating that the pandemic brought unexpected challenges to the NBEO, the board noted it continues to work with testing sites to increase exam windows and opportunities. The NBEO also acknowledged students’ concerns over student debt and increased tuition costs in defending its decision to increase exam costs after a 10-year moratorium on fee hikes.

Similarly, the AOA Board of Trustees cast support behind the AOSA’s insistence on change and emphasized that optometry students are losing confidence in the NBEO because of a failure to adequately address these concerns. Citing the exam cancellations, fee increases and overall lack of communication, the AOA encouraged a more coordinated approach with students.

“Along with the American Optometric Student Association, we expect NBEO to have consideration about how this significantly impacts students’ lives and seek answers for the abrupt change and shortfall in communication,” reads a March 15 letter to the NBEO, signed by AOA’s Board of Trustees.

This isn’t the first time the AOA has taken a stance that changes are necessary at the NBEO. In 2018, the AOA House of Delegates approved a resolution urging the NBEO to reform administration of its Part III exam in a way that would reduce the financial burden on optometry students, including the ability to take its exam at regional testing locations as opposed to the sole location in North Carolina.

In reiterating that concern as recently as last year, Marshall B. Ketchum University President Kevin Alexander, O.D., wrote NBEO on behalf of students at Southern California College of Optometry that the board’s lack of concern for the health and safety of students during the pandemic was “head-spinning.” The NBEO responded: “We do not know of a way that remote testing in geographically dispersed locations can be administered to adequately safeguard exam integrity and protect the health and safety of a key exam stakeholder: the general public.”

Despite the NBEO’s response, many medical licensing boards have adopted remote testing models out of concern for COVID-19 infection—and did so as early as summer 2020. Dentistry implemented manikin-based or computer-based exams with the backing of the American Board of Dental Examiners and the American Association of Dental Boards, while the American Board of Medical Specialties offered programmatic flexibility regarding scheduling and extended deadlines, as well as posting easily accessible information about their individual COVID-19 responses.

Meanwhile, optometry students like Elizabeth reflect on a year marred by one challenge after another en route to graduation and only express a desire to get into practice.

“At this point, there’s just not much more I can do except wait,” she says.