February 11, 2021
As AOA advocates in new federal relief legislation and recognition of optometry’s ability to support the U.S. COVID-19 vaccine campaign, Ohio calls on volunteer doctors of optometry to assist. 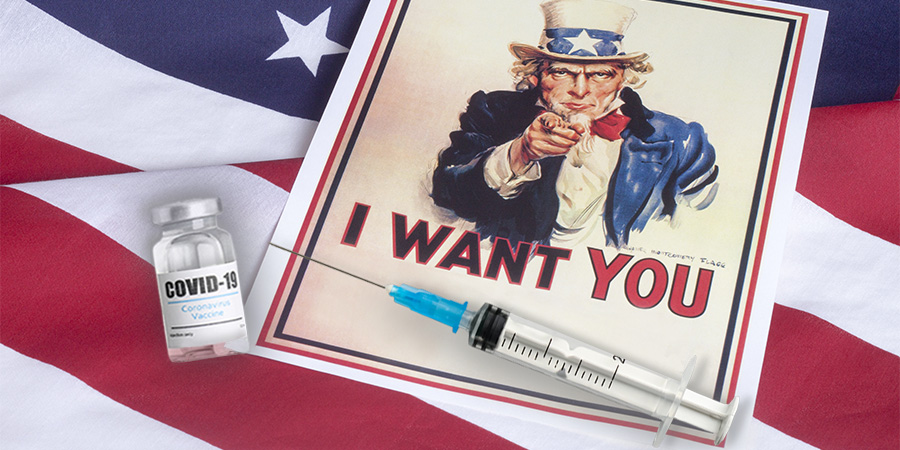 Interested in vaccinator information? This webinar provides an update on state efforts as well as information from pharmacist Jason Wong on vaccine administration, legal and regulatory compliance standards.

“When I saw that flier, I said, ‘This is fantastic. I am doing this,” says Elizabeth Muckley, O.D., Ohio Optometric Association (OOA) immediate past president and a practitioner in rural Portage County. “I signed up right there and was one of the first doctors of optometry contacted, activating me for duty later that Saturday.”

As she rotated through, Dr. Muckley made two astonishing assessments. First, she was the only doctor there—no other medical doctors, veterinarians or dentists—alongside mainly EMTs and nurses. The second, that of the 200 vaccines administered in those two hours, a number of those inoculated were patients from her own practice.

“So many patients recognized me and used that as an opportunity to come over to talk to me about the vaccine, the vaccination card and whether it was safe,” Dr. Muckley says. “People are very apprehensive about it and getting conflicting information, but I reassured my patients that even I had my second vaccine just days before, and I’m doing fine.”

The opportunity was an important foot in the door, Dr. Muckley says, and she is already looking for her next opportunity to volunteer. As colleagues nationwide work diligently to demonstrate that doctors of optometry can support the critical COVID-19 vaccination rollout in their own communities, Ohio is an example of how optometry stands ready to assist.

“Optometry is absolutely capable of vaccinating the public and helping out in this monumental task,” she says. “We are doctors—we must not forget that—and when called upon to help out, these are our patients in the community and our patients are so happy and reassured that we’re there. We can make an impact.”

Like many affiliates, Ohio began advocating relentlessly with state leaders and public health authorities for optometry’s inclusion in vaccination efforts even before the first Food and Drug Administration-cleared vaccines became available. However, the OOA is one of a handful of states able to rely on provisions in state codes that permit authorization for vaccinations in the event of an emergency.

In 2014, the OOA successfully advocated for inclusion in a new law that granted legal authority for the Ohio Department of Health to temporarily expand eligible vaccine administrators, normally prohibited by scope limitations, during a declared emergency. In effect, the law allowed for the MRC and Ohio Responds program of volunteers that could be mobilized at a moment’s notice. That moment came in early January when the department of health issued its request for vaccinators.

In addition to certain eligibility requirements to participate in the MRC, volunteers also were required to take a certified intramuscular injections course. In Dr. Muckley’s case, she sat through a Centers for Disease Control and Prevention (CDC) web-based training course, titled “You Call the Shots.” With proof of completion, volunteers work through local health departments to gain additional training or be scheduled to assist at vaccination sites.

“In Ohio, the vast majority of vaccines are being delivered at mass vaccination locations, not in the offices of primary care providers,” says Keith Kerns, OOA executive director. “Only recently have some pharmacies started to provide access to the vaccine, and most of the vaccination clinics are operated by local health departments, hospitals and health systems.”

But for their efforts gaining optometry’s vaccination authority, the OOA still encountered significant challenges. Like the MRC rollout, details of vaccination distribution priority lists were left largely to local health departments, Kerns adds, creating inconsistencies that persist even today. While the OOA estimates about 9 in 10 doctors of optometry within the state have received at least one dose of the vaccine, some counties still have not opened access to optometry yet. Kerns chalks up the delay to a limited quantity of vaccine available, as well as fractured guidance from the state.

Meanwhile, the OOA continues to educate local health departments that previously restricted access to vaccines for doctors of optometry and their staff; however, challenges remain at an especially critical time in the state’s COVID-19 response.

“It has been frustrating for doctors of optometry in those counties who have not been provided access to this point—this is not an issue that is unique to optometry,” Kerns says. “Other health care provider organizations have reported similar concerns, sometimes in counties which have not been a concern for optometry.”

A two steps forward yet one step back situation is not a uniquely Ohio predicament with regard to COVID-19 vaccinations. Although a patchwork of states’ plans for vaccine rollout initially coalesced around a phase 1 involving health care workers, logistical challenges cropped up as states progressed into subsequent phases. Now, as tens of millions more Americans are slated for vaccinations in the coming weeks, states are working to quickly build their infrastructure even as new SARS-CoV-2 variants threaten to derail progress.

All told, some 41.2 million vaccines have been administered in the U.S. as of Feb. 7, the same day that new COVID-19 cases dipped below 100,000 for the first time since November. Nationwide, case counts are declining, but public health officials say it’s too early to give credit to vaccination efforts and the dip could simply be the “eye of the hurricane.”

In a Feb. 8 White House press briefing, infectious disease expert Anthony Fauci, M.D., noted about 700 cases of coronavirus variants identified in the U.S., the vast majority of the virulent B.1.1.7 type predicted to become the dominant variant by March’s end.

“The encouraging news is that the vaccines we’re distributing right now are quite effective against that particular variant,” Dr. Fauci noted. “[But] less so against the South African (B1.351 variant). Hopefully, we will get the virus under much better control by the time there is any indication that it might become dominant. Again, it gets back to vaccinating as many people as you possibly can and implementing the public health measures.”

Against that backdrop, President Joe Biden’s administration and Congressional leaders opened the 117 th Congress with an aim toward another, immediate COVID-19 aid and relief package. The proposed $1.9 trillion “American Rescue Plan” could include several familiar relief options, including economic aid and vaccine assistance, though exact details will likely change in the weeks ahead.

In Congress’ most recent COVID-19 aid and spending legislation, the AOA worked to ensure optometry’s access to federal relief options, including “second draw” Paycheck Protection Program (PPP) loans and Economic Injury Disaster Loans (EIDL), another round of physician grants, and important directives related to the Federal Trade Commission’s Contact Lens Rule, as well as the provider nondiscrimination law. Currently, the AOA is advocating for not only optometry’s federal recognition in the National Strategy for the COVID-19 Response and Pandemic Preparedness but also new and renewed federal relief options that will help optometry practices, including:

To help support the AOA’s advocacy efforts in the latest round of COVID-19 relief negotiations, visit the AOA’s Online Action Center to write to your U.S. House and Senate members and urge their action on optometry’s priorities. Also, doctors can take action by texting “RELIEF” to 855.465.5124.

The U.S. COVID-19 vaccination campaign requires a concerted effort on the part of every available health care provider if the Biden administration’s goal of 1.5 million vaccinations/day to achieve widespread immunity by mid-2021 is possible. Therefore, the AOA is committed to advocating on behalf of the profession and preparing doctors to assist in these vaccination efforts when and where their localities allow.

Consider accessing these AOA resources with more information on utilizing doctors of optometry as COVID-19 vaccinators:

Visit the AOA’s Online Action Center to write your U.S. House and Senate members and urge their action on optometry’s priorities in the next COVID-19 aid legislation taking shape, or text “RELIEF” to 855.465.5124.