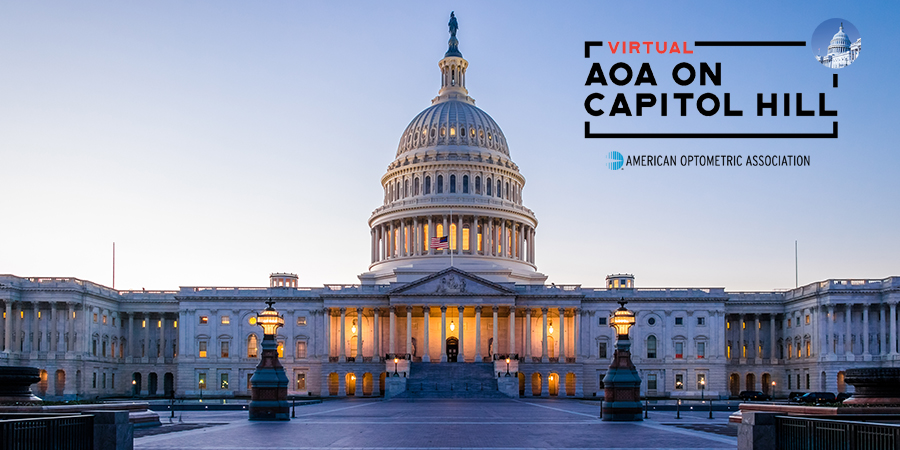 Notwithstanding the COVID-19 public health emergency, optometry’s advocates committed to blazing a path for the profession as record numbers convened virtually to elevate optometry’s priorities before Congressional leaders.

“The AOA has been leading along the way, from the moment we secured recognition of optometry’s physician role in the nation’s COVID-19 mobilization to the actions we are taking now to ensure growth,” noted AOA President William T. Reynolds, O.D., in opening remarks for the 2020 Virtual AOA on Capitol Hill.

“This is what leaders do—they don’t wait to see what happens but take actions to effect change. Leaders are paving the way for our profession’s and our country’s move from recovery to renaissance.”

The single-largest annual advocacy event and centerpiece of optometry’s national advocacy efforts took to Zoom, Sept. 9-10, with over 750 registered doctors, paraoptometrics and students virtually advocating for optometry’s federal policy and regulatory priorities at what may prove to be among the most consequential timings in the Hill day’s history.

“The efforts of these doctors—today and over the past several months—open the door for all doctors of optometry to advance our profession and ultimately the level of care we provide our patients,” Dr. Reynolds said. “It is critical that we continue to build on this momentum and ensure that optometry is heard loud and clear.”

In addition to adding nearly $13 million in new compliance costs annually, by the FTC’s own estimate, the new paperwork and record-keeping requirements levied on contact lens prescribers would cost small health care practices upward of $18,000 a year—very significant financial tolls considering the FTC’s own data show a prescription release complaint rate of less than 0.0000008. Advocates argue the FTC’s insistence on pursuing the paperwork mandate amounts to “a solution in search of a problem,” and at a time when optometry practices are already contending with the COVID-19 pandemic.

“Years’ long advocacy has actually forced the FTC to put this rule review on pause—it’s been five years now since they began this process and that’s one of the longest known rule reviews,” said Chris Wroten, O.D., AOA Federal Relations Committee member. “Unfortunately, after shelving the rule for several years, in the middle of this pandemic when we’re all trying to reduce the amount of paperwork that patients have to sign and leave with us in the office, [the FTC] went ahead and put this final rule out.”

What’s more, the new rule requirements run counter to a May 2020 federal directive that encouraged all regulatory agencies to reduce any regulatory burdens that may inhibit economic recovery from the COVID-19 pandemic.

Despite letters from Congressional leaders asking for a significant delay in the rule implementation; a rebuke from the U.S. House appropriations subcommittee with jurisdiction over the FTC’s budget; a rare, joint letter from AOA and the American Academy of Ophthalmology, as well as letters from industry and VSP; and even an appeal directly to President Donald Trump, the FTC is poised to implement these changes in a month’s time. However, a late-breaking development during Virtual AOA on Capitol Hill may help address some concerns.

Set to be formally introduced by Sen. John Boozman, O.D., R-Ark., in September, the Contact Lens Rule Modernization Act would replace the FTC’s flawed contact lens prescription release paperwork requirement with a compromise solution requiring the posting of signage, as is now law in California. The legislation, which is already gaining support, also would prevent the use of disruptive and unreliable prescription verification “robocalls,” the preferred method of online sellers looking to skirt their requirements under existing law. The legislation would effectively overrule the flawed pieces of the FTC’s recent rule change, and optometry’s advocates worked diligently to gather even more support.

Alternatively, another piece of legislation is working to eliminate concerns created by robocalls. Introduced by Reps. Bobby Rush, D-Ill., and Michael Burgess, M.D., R-Texas, H.R. 3975, the Contact Lens Prescription Verification Act, would prevent online contact lens sellers’ use of automated robocalls to verify prescriptions and create a method for allowing patients to upload electronic copies of contact lens prescriptions to sellers, ensuring that patients received the lenses fitted and prescribed by their eye doctor while skipping the verification process altogether.

“This passive verification system is fraught with errors, patients pay the price—that’s why we need this legislation,” Dr. Wroten said.

Although Senate leaders couldn’t find common ground Thursday on a “skinny” proposal to address the health and economic consequences of COVID-19, optometry’s advocates worked to emphasize the primary eye care role that doctors of optometry provided during the pandemic, as well as posited measures that would support the profession in any future legislation.

Adam Parker, O.D., AOA Federal Relations Committee member, noted that the AOA’s been heavily involved since the pandemic began to ensure optometry’s inclusion in all aspects of crisis legislation and regulation, including advocating for recognition of the profession’s full physician status in relief funds and emergency Medicare telehealth policies. While this assistance provided a lifeline when it was needed most—especially during a cessation of primary and preventive care in March by the Centers for Disease Control and Prevention that reduced many doctors’ patient flow by 90% nearly overnight—the impact from the virus continues with doctors and students still struggling. Therefore, advocates encouraged Congress to support:

“Doctors of optometry, students and staff appreciate what Congress has already done to help mitigate the impact of the pandemic—PPP, EIDL, loans, HHS physician grants, student loan deferments—they’ve all helped; however, we feel that more can and must be done,” Dr. Parker said.

Lastly, optometry’s advocates continued to garner support for a measure that combats abusive practices in the federally regulated vision and dental coverage markets.

Additionally, H.R. 3762 would limit plan contracts to two years, unless the doctor chooses to extend the contract, as well as include a private right of action provision that allows individual doctors to take offending plans directly to court.

In fact, an independent health economist report concluded that the kind of monopsony behavior exhibited by vision plans “is not the kind that’s good for consumers—it’s the kind designed to transfer operating margins from providers to plans without benefiting consumers.” So, too, the report noted that such mandates may lead to higher overall costs for consumers.

“Without Congressional action, patients and doctors will continue to suffer,” Dr. Montaquila said.

“For patients these plan abuses are leading to higher overall costs and shrinking access to essential eye health and vision care. For doctors, too many of us are being forced to choose between continuing to provide needed care to our neighbors and keeping our small-business health care practices viable.”

Nothing replaces the value of face-to-face meetings with members of Congress, but Virtual AOA on Capitol Hill comes close. With legislators’ offices closed due to COVID-19 and many staffers working from home, virtual sessions are the new norm for 2020—and the AOA was praised for the swift pivot for Hill day sessions.

Growing from only 200 attendees a decade ago, AOA on Capitol Hill set a record attendance this year while welcoming paraoptometric staff participation for the first time. This swelling attendance at AOA on Capitol Hill is a big reason why AOA has been repeatedly recognized as one of the top advocacy organizations in Washington, D.C.

Closing out a busy Thursday of virtual Hill meetings, Nathan Gonzales, CNN and MSNBC contributor, as well as editor and publisher of Inside Elections, shared a keynote address on the approaching 2020 general election and how the much-anticipated election could reshape the political landscape in 2021 and beyond.

Want to help advocate for the profession? Here are two ways to get involved in AOA’s advocacy:

The first of two Medicare sequester cuts loom on the horizon for doctors’ pay with additional cuts anticipated later this year. How AOA and others are working to avert an impending fiscal cliff.