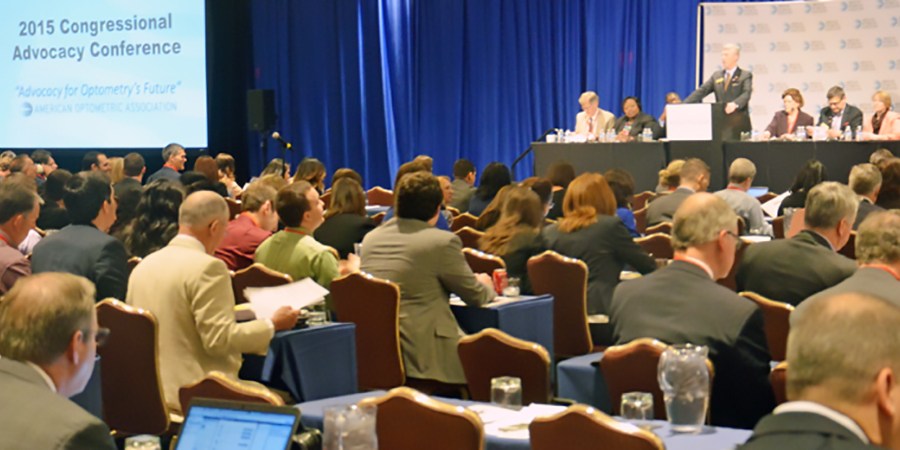 The decennial White House Conference on Aging (WHCOA), hosted by President Barack Obama on July 13, 2015, served as a catalyst to a yearlong dialogue about America's evolving aging outlook over the coming decade. The final report represents a culmination of that conversation, one in which AOA offered crucial perspective.

Earlier in April 2015, the AOA Congressional Advocacy Conference welcomed officials from the U.S. Senate Special Committee on Aging and AARP to a special summit on eye care's role in healthy aging. AOA leaders and aging experts stressed the importance of early, routine comprehensive eye exams and underscored the gaps in eye care to Medicare recipients.

Panelists noted that seniors often have undiagnosed and untreated eye or vision problems that can lead to serious issues, such as preventable falls, and greater access to doctors of optometry could lead to earlier detection. However, Medicare does not routinely cover comprehensive eye examinations unless a patient has been diagnosed with a specific medical condition, or has symptoms of an eye problem caused by illness or injury. Additionally, there is no defined coverage benefit for low vision.

"We really need help from associations like (AOA) and AARP ... to identify gaps and create a longterm strategy for Medicare," said Derron Parks, U.S. Senate Special Committee on Aging staff director, at the time.

Stemming from that summit, the AOA delivered a report to the WHCOA executive director. The report highlights the Centers for Disease Control and Prevention's (CDC's) own acknowledgement that routine eye care by an eye doctor is one of the top ways seniors can stay independent and reduce their chances of falling.

The report also notes that both the CDC and National Eye Institute assert that regular, inperson, comprehensive eye exams by an eye doctor are the only way to detect vision problems and eye diseases in their earliest and most treatable stages.

"AOA remains committed to fighting on behalf of seniors and for policies that would help ensure greater access to regular, comprehensive eye exams performed by an eye doctor," the report states.

Additionally, the WHCOA hosted five regional listening sessions to engage stakeholders and local communities for feedback. Stacey Meier, O.D., Arizona Optometric Association executive director, participated in one such session in Phoenix, Arizona, that involved much discussion about quality of life, preventive medicine and falls prevention. He made clear that good vision achieves all of these goals and that preventive eye care and early intervention of eye problems goes a long way in adding to seniors' quality of life.

"Quality preventive eye care seems to be small, but in my opinion, it's an extremely important piece of the puzzle," Dr. Meier says.

"It was important to make sure that those planning the (WHCOA) knew just how committed doctors of optometry are to healthy aging in seniors, and just how significant a role that vision and eye health status can and often does play in a senior's ability to prevent disease and stay healthy."

Read more about AOA's advocates for aging eyes in the 2015 July/August edition of AOA Focus.

With release of the WHCOA final report, it's clear those concerns caught officials' attention. Report language specifically mentions the intersection of healthy aging and vision care, and gaps in Medicare coverage: