June 25, 2020
Federal regulators finalized new Contact Lens Rule mandates on prescribers despite years of opposition from not only the AOA but also members of Congress, prompting optometry's advocates to press for fairness and full accountability in the regulatory process going forward. 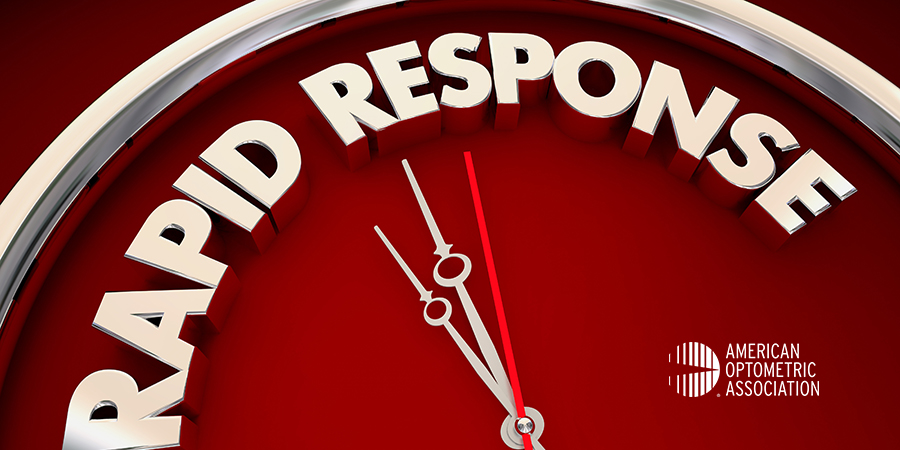 Federal regulators finalized new Contact Lens Rule mandates on prescribers despite years of opposition from not only the AOA but also members of Congress, prompting optometry's advocates to press for fairness and full accountability in the regulatory process going forward.

In an announcement posted Tuesday, the Federal Trade Commission (FTC) approved a final rule amending the Contact Lens Rule that will require prescribers to obtain signed acknowledgement forms indicating patients' receipt of contact lens prescriptions, and to keep record of that patient confirmation for at least three years. The commission voted 5-0 in favor of approving the final notice of rulemaking, and the Contact Lens Rule changes will go into effect 60 days after publication in the Federal Register—which the agency expected "to be published shortly."

"The FTC was wrong four years ago when they first proposed this destructive plan and they're wrong today in seeking to implement it," says incoming AOA President William T. Reynolds, O.D. "More than 100 U.S. Senators and House members—Republicans and Democrats—have joined with the AOA since 2016 to fight back and we will do what it takes to increase this support going forward. This is a completely misguided attack on law-abiding, frontline optometry practices that is made even more outrageous and unacceptable coming at a time when we've been providing essential, primary care to our patients through every stage of the COVID-19 public health emergency."

These Contact Lens Rule changes are the result of a protracted rulemaking process that began in 2016 with solicitation of thousands of public comments, a subsequent FTC workshop to discuss the contemporary contact lens marketplace, repeated letters and comments from over a hundred bipartisan legislators, an all-out mobilization by doctors of optometry to decry the proposed changes, numerous meetings between AOA staff and federal regulators, and supplementary changes as recently as May 2019.

All the while, the AOA and doctors of optometry have emphasized that the additional administrative burdens proposed by the FTC are not only unfounded, ignoring the agency's own data showing a total of 309 complaints regarding the Contact Lens Rule out of an estimated 200 million prescriptions issued between 2011 and 2016, but also miss the mark by not adequately addressing sellers' disregard of patient health concerns and safeguards outlined by the rule.

Still, federal regulators decided to move forward with changes that aren't substantiated by federal complaints data and at a time when the tens of thousands of small health care practices affected by this ruling are coping with the global coronavirus pandemic.

"This new, flawed mandate reinforces that the agency, the commissioners leading this charge, are unfortunately out of touch with the realities of today's environment and, more importantly, patient care in general," says David A. Cockrell, O.D., AOA advocacy chair and AOA past president. "Instead of focusing in on the true issues impacting patient safety, including illegal actions by some contact lens sellers, this rule is requiring patients to take actions they don't want to take, including increased exposure to surfaces by signing a document."

Per the FTC notice, prescribers now will be required to do one of the following to confirm patient receipt of their prescription following a contact lens fitting:

These receipts must be kept for at least three years. In the event a patient refuses to sign, prescribers still must keep record of this for compliance. The rule also allows prescribers to release a digital copy of the prescription as long as patient consent to obtain the prescription electronically was received and is documented, and requires prescribers to provide patients or their designated agents with an additional copy on request within 40 business hours.

While the FTC's final rule also includes modest changes to sellers, the AOA is adamant that these do not go far enough.

The AOA opposes the FTC's ruling but remains committed to advocating for doctors of optometry and patient safety, as it's clear that debate in the contact lens marketplace is far from over.

In a statement issued separately from the FTC notice , Commissioner Rebecca Kelly Slaughter expressed misgivings within the contact lens market and urged Congress consider "a narrow legislative fix" to facilitate new entrants into the market. Although noting her own lack of medical expertise, the commissioner pondered the interchangeability of different manufacturers' lenses and prescription lengths and noted there's more work to be done.

However, it's clear that AOA and member doctors have laid formidable groundwork as this debate continues. In recent years, FTC commissioners have been grilled by pro-optometry leaders in Congress on the status of the agency's plans to update the Contact Lens Rule. For instance, in separate U.S. Senate hearings in 2018, Sens. Roger Wicker, R-Miss.,  and James Lankford, R-Okla., engaged the commissioners directly on optometry's concerns.

"The AOA will leave no stone unturned to fight this mandate and restore sanity to contact lens care," Dr. Cockrell says.