November 18, 2020
At Nov. 17 FDA workshop, doctors of optometry warn of a lack of communication regarding the safety of online vision tests. The AOA, which continues to educate the public on these mobile apps and to hold them accountable, offers its expertise. 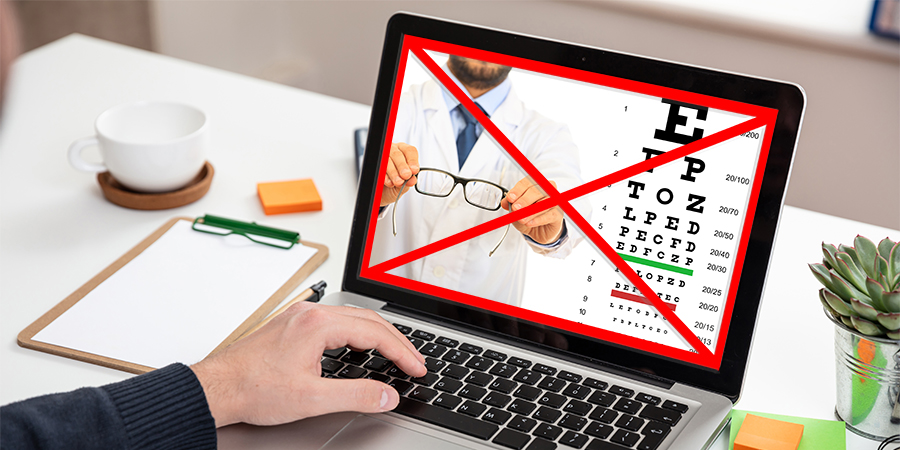 Inquiring minds at the Food and Drug Administration (FDA) wanted to know during a Nov. 17 workshop how to best communicate with the public about the safety of medical devices.

Start by talking to doctors of optometry and doing more to educate the public on the safety issues posed by online vision tests, AOA members at the workshop responded.

William T. Reynolds, O.D., AOA president, noted in his comments that the association represents 33,000 doctors of optometry and optometry students and called the AOA the leading authority on eye health, vision care and patient safety issues.

“Doctors of optometry prescribe the majority of contact lenses for patients in the United States,” Dr. Reynolds says. “We know the value these FDA devices can have on patients’ lives. We also know that, without appropriate care and oversight, patients can be harmed by inappropriate use of medical devices.

“Getting accurate, reliable and actionable information to the public about medical device safety is a critical function of the FDA,” he adds. “The FDA has recently been given the challenging task of regulating the many medical mobile apps that have come to market. We understand that the agency works to apply its regulatory oversight to only those mobile apps and medical devices that pose a risk to public safety.”

And the FDA has taken action against a mobile app that posed risks to the public, at the behest of the AOA. The AOA also has raised concerns with the Federal Trade Commission regarding practices employed by the companies operating the apps.

For instance, after three years of concerns raised by the AOA about health risks, the FDA prompted a voluntary recall by the online vision testing company Visibly, formerly known as Opternative. When online apps claim to be able to renew a contact lens prescription outside of an in-person, comprehensive eye exam gives, it gives patients a false sense of security that their eye health had been examined.

Unfortunately, Dr. Reynolds says, similar products have entered the market since that recall. The AOA has reported these companies to the FDA and is awaiting action. In the meantime, the AOA will continue to educate the public, the news media, elected officials and regulators on the potential harm posed by online apps.

“The AOA is calling upon the agency to partner with doctors of optometry and to develop clear and specific information to the public about the risks involved in these types of apps,” Dr. Reynolds says.

Lori L. Grover, O.D., Ph.D., a member of the AOA Board of Trustees, cited results from research she and colleague Gregory Wolf, O.D., Ph.D., conducted at the Center for Eye and Health Outcomes in Memphis where she is co-director.

They systematically reviewed 34 different applications available in the U.S. with an end-user focus on two contact lens-related apps heavily marketed to the public.

“None of the 34 apps followed standard of care as per evidence-based clinical guidelines,” she says. “Of the two apps investigated in-depth, neither met the FDA’s criteria for ‘relatively harmless apps’ or for ‘software as a medical device.’ Throughout the study, one app continued to offer a contact lens under FDA recall. We found little scientific or analytical validity or reliability in the final medical device outcomes.”

Findings on patient understanding and use of the mobile health apps were concerning, Dr. Grover says. Their study found:

“So, in helping the FDA formulate more effective public health communications on medical devices, we stand ready to assist the FDA in making the (medical device) landscape safer for the public,” Dr. Grover says.

After years of the AOA alerting the company of regulatory and legal requirements regarding contact lens sales, Vision Direct recently announced on its website that it was halting its no-prescription service.

The advocacy collaborative fighting for patient safety and the doctor-patient relationship reports on a productive 2020, despite COVID-19 challenges, and recently welcomed Alcon as its newest member.

Misleading messaging on 1-800 Contacts’ website and other concerns related to the retailers’ ExpressExam were remedied after recent AOA actions.