May 28, 2020
Opponents to Arkansas’ optometric scope of practice expansion up the ante in fight to repeal law; AOA steps up support and urges members’ immediate help. 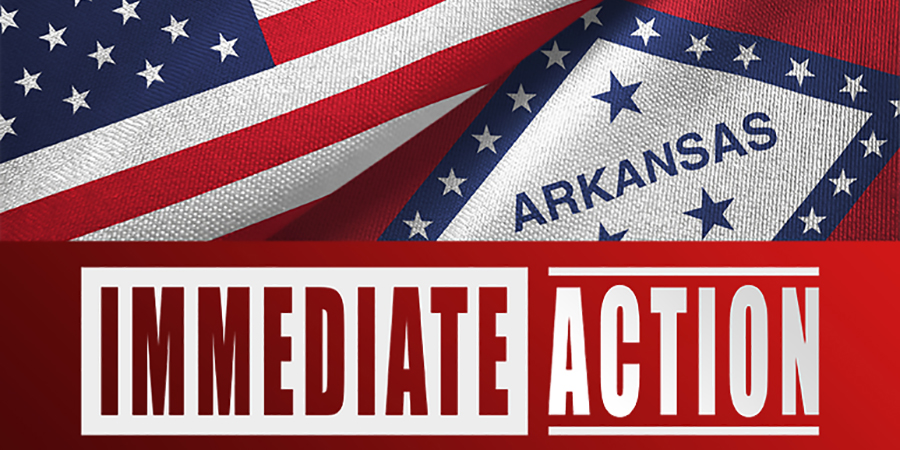 Just when we thought the scope expansion battle in Arkansas couldn't get any hotter, doctors of optometry there are turning up the heat in response to a November ballot measure that would overturn a recent scope of practice law enacted by the state legislature last year.

This heated battle has implications for doctors of optometry beyond the state of Arkansas.

Based on filings with the state ethics commission, the ophthalmologists' group "Safe Surgery Arkansas" surpassed $1 million in monetary contributions from more than 30 states, raised in support of this measure on the ballot in November, that would reverse Act 579 comfortably passed in the 2019 General Assembly.

The act expanded the state's optometric scope of practice act to permit new procedures, including selective laser trabeculoplasty and YAG laser capsulotomy, certain injections (excluding intravenous and intraocular), removal of lid lesions, and chalazion incision and curettage. Additionally, it requires the Arkansas Board of Optometry to establish credentialing requirements for doctors of optometry who perform these laser procedures and to require them to report the outcomes of their procedures to the Arkansas Department of Health.

Similar to existing laws already on the books in Oklahoma, Kentucky and Louisiana, and a law currently being implemented in Alaska, Arkansas' Act 579 is based on successful scope of practice expansions that have reported positive outcomes and expanded patient access without significant changes to doctors' of optometry malpractice rates, which are often based on negative outcomes.

The Arkansas Optometric Association (ArOA) and member doctors have been waging a long, strategic fight and the AOA is strongly countering the ophthalmologists' fundraising with its substantial and immediate financial support. This significant support will help level the playing field for Arkansans for Healthy Eyes, a coalition of doctors of optometry and patients who support the current law.

"They challenge our education. They challenge our patient care. And they have even challenged our ethics and morality," says Matthew Jones, O.D., who practices in Blytheville, Arkansas. "Nothing is off limits to them. But optometrists will fight the good fight and we'll do so while taking care of our patients as we always have."

Arkansas's fight and its outcome may become a blueprint for other scope challenges around the country, says Belinda Starkey, O.D., immediate past president of the ArOA, who practices in Rogers, Arkansas.

"If the law in Arkansas is not upheld, it will be extremely difficult for any other state to achieve optometric scope expansion. This fight could set a precedent that might affect the rest of the profession nationwide," she says.

"Ensuring that state laws advance to meet the level of our training and education has and will always be one of AOA's top priorities," says Barbara L. Horn, O.D., AOA president. "We will not stand quietly by, while the opposition lays out false and egregious attacks, and we will do everything we can together to win this battle for Arkansas and the future of the profession of optometry."

How Arkansas' scope battle got here

Even though Act 579 improves Arkansans' access to eye health and vision care, "Safe Surgery Arkansas" challenged the law in June 2019 and began collecting signatures to place the law on the November 2020 general election ballot. Requiring nearly 54,000 signatures, the group fell short of that mark when the secretary of state's office initially invalidated more than 61,000 of 84,000 signatures collected by unqualified referendum petition canvassers; the invalidation reasoning stemming from a state law passed concurrently to Act 579 that required petition canvassers to file affidavits.

The matter went before the Arkansas Supreme Court, where it was disclosed that a state elections official had alleged unethical behavior on the part of another department employee, who allegedly asked the official if the department could say the canvassers' affidavits "were just found in the office" or in another division, presumably to cover up for missed filing deadline by the referendum's proponents.

Although the  Supreme Court later ruled 4-3 that the secretary of state's office must count the signatures, effectively placing the question on the November 2020 ballot, Arkansans for Healthy Eyes unsuccessfully petitioned several times to reverse the decision and the ballot referendum.

In its most recent legal challenge, Arkansans for Healthy Eyes alleges paid canvassers for "Safe Surgery Arkansas" not only misrepresented Act 579, falsely stating the law permits doctors of optometry to perform LASIK and cataract surgeries, but also misrepresented doctors' of optometry education and training, and therefore should be invalidated. Additionally, the lawsuit notes the proposed referendum ballot title and popular name are invalid, lacking attorney general approval.

As this challenge is before the state's Supreme Court, Arkansans for Healthy Eyes asked the court to declare that Act 579 is in effect since there's no legally effective referendum against it. Pending decision of the high court, the measure to repeal Act 579 may appear on the November ballot when turnout is likely to be high due to a presidential election.

Geographically, doctors of optometry provide better access to patients.
"Our patients, especially in a rural state like Arkansas, need better access to care," Dr. Jones says. "Plus, the minor surgical procedures specified in Act 579 can be effectively and safely done in our offices on the same day if needed. The law means better health care to our patients. With quicker and easier access, it saves our patients time and money.

"All of this has never been more important than now with the COVID-19 pandemic," he says, noting that Arkansas-based optometrists are already providing the services in neighboring Oklahoma and Louisiana. "Hometown optometrists can perform these procedures and take care of our patients without long waits in busy waiting rooms in busier, bigger cities."

If Act 579 is upheld, Dr. Starkey says, patients will continue to have the choice to see their local community optometric physician they know and trust¬¬-without the need for referral to another specialist.

"By being accessible to our citizens, we can provide the eye care they need more quickly and at lower costs to patients by saving them the expense and time of traveling to another office," Dr. Starkey says. "For some families, it may make the difference in receiving care or not receiving the care at all. Many patients needing more advanced treatment procedures are elderly and tend to require a caregiver to take them to appointments.

"The extra travel costs and time requirements which encumber these patients (again, predominantly senior citizens) acts as a barrier to needed care," she adds. "Often as a result, patients delay or forego these necessary procedures, resulting in worsening disease and much higher costs to the health-care system in the form of more costly long-term medications and/or more expensive and more invasive surgeries later."

Arkansas' doctors of optometry know they are in for a costly fight, not only for Arkansas optometry but also nationwide. Doctors from more than 30 states have contributed to the ophthalmologists' group.

The costs will be drastic, Dr. Jones says, but the cause is worth it.

"They will spend it all to hold us back on mass media," he says. "We are at war with our opposition across the country, and we will win this war yet again."

Joe Sugg, O.D., ArOA president-elect, recalled the text he received in March 2019 from an ophthalmologist he had referred patients to for a decade. In the text message, the ophthalmologist said he could no longer have his name "associated" with Dr. Sugg's office, because of the optometrist's support for last year's bill.

Over the years, Dr. Sugg had referred to the ophthalmologist, who practices about 45 minutes away, primarily cataract patients and they had had a good working relationship. He was initially shocked by the text.

"I was surprised he would make that decision if he was so concerned about what was in the best interests of patients," says Dr. Sugg, who practices in Heber Springs in rural Arkansas. "The blessing is that we found other good surgeons out there who are more than willing to take good care of the patients and do what's in the patients' best interests.

"I imagine it's going to get a little more heated over the coming months," he says. "Our goal all along was to pass this bill to provide better care and services to our patients, to increase accessibility to our patients, especially in rural areas like mine. That still remains our focus. And that's why we're fighting this fight."

As a profession, optometry delivers 85% of the primary eye health care in America with doctors of optometry practicing in counties that make up 99% of the U.S. population. That level of accessibility is why the AOA and state associations contend that optometry is well-positioned, highly educated and qualified to provide these kinds of expanded eye health and vision care services. However, restrictive state laws based on outdated and tired misrepresentations of optometry's education and capabilities have created self-imposed barriers to maintain a status quo.

Advocates work tirelessly to  modernize state scope of practice statues to  allow doctors of optometry to practice to the top of their license and utilize their full skill set, including fully recognizing new and advanced procedures that reflect 21st-century optometric education and training.

"For our health care system to work efficiently and effectively, every practitioner needs to practice to the highest level of their education and training," says AOA President-elect William T. Reynolds, O.D. "These procedures are certainly within the training and scope of optometry, offering more accessibility to our patients."

Arkansas' fight may set the tone for scope expansion efforts in the years ahead, Dr. Reynolds says, which is why the AOA stepped forward to make a significant investment in this fight-and urge all doctors of optometry to support this campaign, too.

Contribute to the Arkansans for Healthy Eyes campaign

By contributing, doctors of optometry are helping assure advocates can make a stand and positively affect the future of optometric care in this nation. Contributions can also be made by check to, Arkansans for Healthy Eyes PO Box 3521 Little Rock, Arkansas 72203.