May 2, 2019
Maryland doctors of optometry gain new autonomy, prescribing authority, and procedures and management privileges with scope of practice expansion. 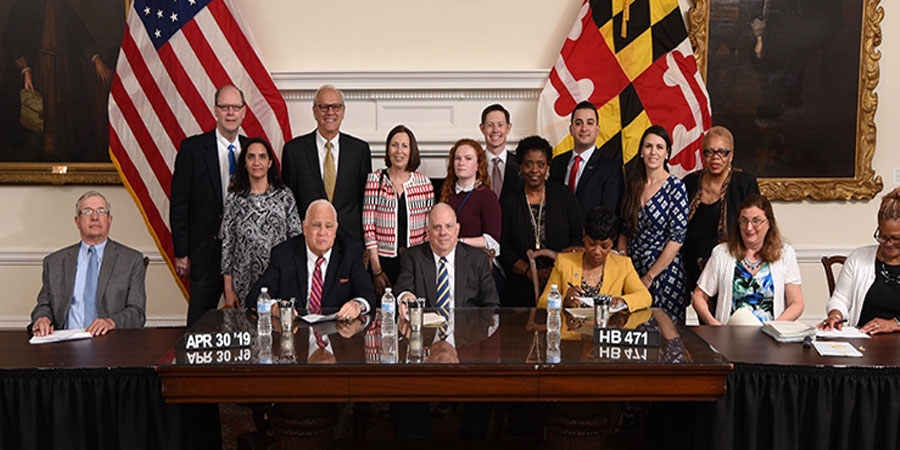 Maryland has modernized its optometric scope of practice, once among the most restrictive in the nation, amid state affiliates' all-out advocacy push to advance optometry's future-focused role in health care.

"I’m very excited to announce that Maryland is no longer one of the most restrictive states in the U.S. to practice optometry."

Signed into law April 30 by Gov. Larry Hogan, the bipartisan legislation (House Bill 471/Senate Bill 447) amends the state's optometric scope of practice to repeal certain provisions of law that required a therapeutically certified doctor of optometry to refer certain patients to an ophthalmologist, and authorizes prescribing authority for topical agents and oral pharmaceuticals (with some exceptions) for the prevention, management or treatment of conditions and diseases of the eye and ocular adnexa, as well as expanding procedures and management of certain patients.

Kevin Johnson, O.D., Maryland Optometric Association (MOA) president, says this victory is the result of advocates' tireless work over the past six years to address scope expansion, all the while facing significant pushback. Maryland last expanded its scope of practice in 2005.

"With the stroke of his pen on Tuesday, Gov. Hogan improved access to eye care for Maryland's citizens with this common-sense legislation," Dr. Johnson says. "I'm very excited to announce that Maryland is no longer one of the most restrictive states in the U.S. to practice optometry."

Once among the most restrictive optometric scope of practice laws in the U.S., Maryland was the only state that required permanent co-management of glaucoma patients and one of only five states that required an initial referral to an ophthalmologist without exception. Moreover, Maryland doctors of optometry were prohibited from ordering diagnostic tests, unlike the vast majority of other states. All of this was compounded by the fact that doctors of optometry are the only primary eye care doctors in six Maryland counties where no ophthalmologists practice, as described by House testimony. That's why advocates successfully argued that by permitting doctors of optometry to practice to the fullest extent of their training and education, Maryland's residents could benefit from reduced health care costs and improved patient access.

Specifically, the new law permits Maryland's doctors of optometry independent management of open-angle glaucoma patients; corneal and conjunctival foreign body removal with any tool other than a scalpel; ordering and performing tests, such as blood, cultures and non-radiographic imaging; prescribing of all topical agents except anti-metabolites; and prescribing of any oral pharmaceutical with certain exceptions. Additionally, the amendment includes licensure and continuing education requirements.

"Thanks to all the Maryland doctors of optometry who collectively spent thousands of hours over the past six years to get this done, as well as our executive director, Jennifer Cohen, and our advocacy team who were instrumental in moving our scope of practice forward," Dr. Johnson says.

Despite the fact that optometry delivers 85% of the primary eye health care in America with doctors of optometry practicing in counties that span 99% of the U.S. population, restrictive state laws based on archaic assumptions of the profession's prowess continue to create self-imposed barriers to patient care. These access loopholes and outdated state laws are what AOA and state affiliates strive to eliminate with a concerted focus on optometric scope of practice.

The AOA's Future Practice Initiative, launched by AOA President Samuel D. Pierce, O.D., and the AOA Board of Trustees in 2018, in close partnership with state affiliates, is poised to fix those dated state laws that unfairly limit how doctors of optometry practice and provide essential care for their patients, including through fully recognizing new and advanced procedures that reflect optometric education and training.

"On behalf of our patients, optometry is mobilizing to do everything it takes to advance our practices and define our profession for years to come," Dr. Pierce said. "By supporting our AOA and state associations right now, our member doctors and students are answering our profession's most important call to action ever, and we're getting results."

As early progress is being made in several states already this legislative session, others are looking at creating opportunities in 2020 and beyond. What's more, federal authorities underscore optometry's stance that the status quo is flawed.

Released Dec. 3, an agenda-setting report from the Department of Health and Human Services (HHS) outlaid reforms the government should take to deliver optimal care to Americans, including realizing new health care choices for the public and identifying barriers on federal and state levels to market competition. Not only did the report specifically note that doctors of optometry can provide the same services as other physicians, it also emphasized that "states should consider changes to their scope of practice statutes to allow all health care providers to practice to the top of their license, utilizing their full skill set."