November 5, 2020
While 2020 will be remembered for the COVID-19 crisis, AOA affiliates, including Arkansas, managed to successfully navigate the pandemic and opposition from ophthalmology to expand care for treating patients. 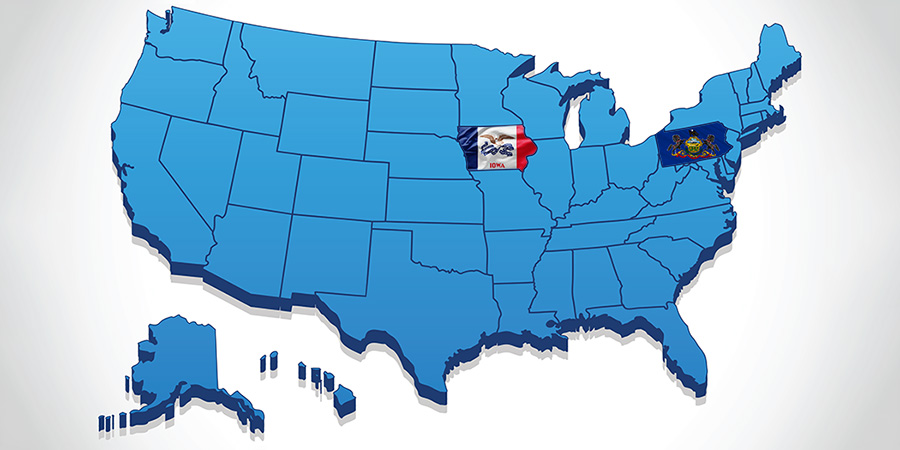 It took nearly two decades but doctors of optometry in Pennsylvania finally claimed victory as they significantly expanded their state’s scope of practice laws.

On Oct. 29, Pennsylvania Gov. Tom Wolf signed Act 99 (House Bill 2561), an amendment to the state’s Optometric Practice and Licensure Act first passed in 1980. The amendment not only expands the ability of doctors of optometry to examine, diagnose and treat patients, but also gives the state board of optometry sole authority to set optometric formulary there.

Patients, now seeing their eye doctors, will have greater access to needed medications.

“This legislation is a big win for optometry but, more importantly, for the citizens of Pennsylvania,” says David Evans, O.D., president of the Pennsylvania Optometric Association (POA), which spearheaded the push for expanded scope.

“The POA has actively been pursuing improvement in its scope of practice for the past 18 years,” Dr. Evans says. “While other legislative victories have been achieved, our scope legislation has always faced fierce opposition.”

For many years, the POA found itself playing defense against bills introduced by ophthalmology. But circumstances came together correctly this year.

Dr. Evans credited experienced and passionate leadership on the POA’s Legislative Affairs Committee—as half of its 16 members are past POA presidents—which “worked diligently during difficult times to enhance the level of care Pennsylvania optometrists could provide the citizens of Pennsylvania.” They also worked to develop and strengthen relationships with key legislators.

“This year, optometry in Pennsylvania was recognized during the pandemic as an ‘essential provider’ by our governor,” Dr Evans added. “Our profession was on the front line for patient care during the stay-at-home order and beyond. Our keypersons and members educated their legislators as to the vital role doctors of optometry play in the care of their constituents.”

With all of the adversity doctors of optometry have faced this year, these successes exemplify the fortitude of AOA members across the country. Members’ knowledge of the legislative process, personal resolve and passion for the profession are the reasons why patients have gained access to necessary and critical care throughout the duration of this pandemic.

And Pennsylvania isn’t the only state celebrating scope expansion.

In Iowa, strategic persistence pays off

You might forgive members of the Iowa Optometric Association (IOA) for waiting to exhale, even as their governor was poised on June 29 to sign a bill expanding scope of practice in the state.

Not only had the association been waging this legislative battle since 2016, but it also had to overcome considerable obstacles along the way. Toward the end of this tireless effort by IOA,  a handful of opponents who support ophthalmology’s position against scope expansion dug in their heels, burying the bill in committee despite bipartisan support. A sit-down between doctors of optometry and lawmakers occurred to resolve some language differences and salvage the bill.

Even on the day the bill was to be signed by Gov. Kim Reynolds, a few members of the IOA who were there to witness the signing had to maneuver through a voting rights demonstration at the Des Moines Capitol to get there.

Doctors of optometry in Iowa, provided they have requisite education and training, can now provide the following care to patients:

“There were times when we knew going in we were going to ‘lose’ in a particular subcommittee meeting, and we debated whether there was any point in having our doctors drive to Des Moines. But we decided it was important to show up anyway,” says Jeff Anderson, O.D., co-chair of the IOA Government Relations Committee. “Our ‘strategy of stubbornness,’ of continuing to show up even when the outcome was not going to be favorable, forced those who opposed us to publicly state the reasons for their opposition. Some arguments were ‘scare tactics’ and could be exposed, but we could also see what objections resonated with legislators, which enabled us to be prepared to address them.

“Showing up also signaled to those who opposed us, as well as those who supported us, that we were not going to give up,” Dr. Anderson says. “In the end, our perseverance paid off. Our membership really came through by supporting our advocacy efforts financially, by attending meetings we hosted with legislators and by contacting legislators they had relationships with when it really mattered the most. As a result of their efforts, Iowa doctors are now even better positioned to the meet the eye care needs of their patients going forward.”

In September, the Arkansas Supreme Court ruled in favor of optometry’s position, after a yearlong court battle against a well-financed group backed by both local and national ophthalmologists. Although this ruling was welcomed by the Arkansas Optometric Association (ArOA) and doctors across the state, the ruling wasn’t the end of their hard work.

“The Arkansas state board of optometry has issued rules for Act 579 and they will be heard by the Arkansas Legislative Committee-Administrative Rules in December and once approved, or promulgated, testing for expanded licensure by Arkansas doctors can begin,” says Vicki Farmer, executive director of the ArOA. “We hope to have doctors of optometry licensed for expanded procedures by January of 2021.”

“These victories, as are all legislative victories, are the result of a focused, grassroots effort and longstanding legislative work in local states,” Dr. Wolfe says. “And particularly, in Arkansas there was a real effort to plan three or four steps ahead in the event that the courts did not rule a certain way. Even though Arkansas was a battle in the courts, it highlights what can be done legislatively. Whenever you introduce a bill, you should have a very solid count of your allies in the legislature, but perhaps what is more important is to also be aware of where your specific legislative pitfalls will be and have a plan to overcome them when they arise.

“In 2021, there will be multiple opportunities across the country to continue to advance patient access to optometric services, and these paths will likely look different than they ever have, with more virtual contacts with legislators, but I still think they will hinge on specific relationships that have been built and cultivated over time,” he says.

Virginia becomes the ninth state—and third since 2021—to expand its optometric scope of practice to include these contemporary procedures.

Doctors of optometry repeatedly leverage long relationships to ensure patient safety in delivering eye care and overcoming push by 1-800 Contacts. The lesson: Be proactive and reactive.