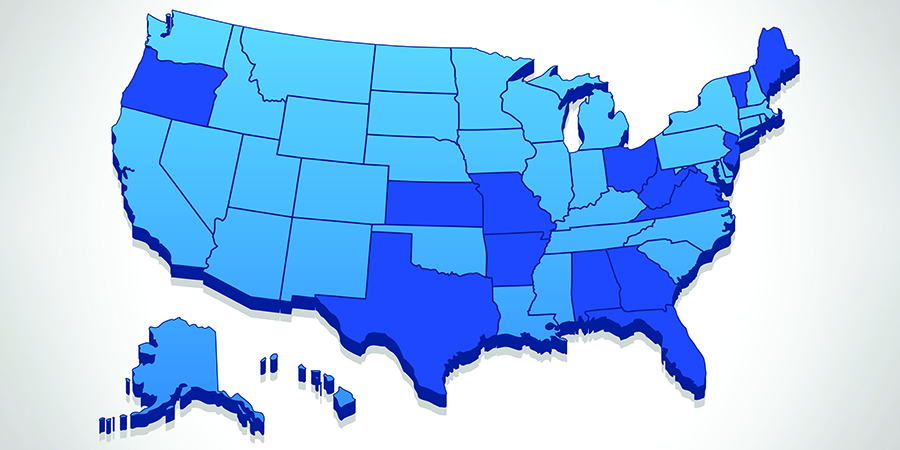 Looming reimbursement policy changes that could negatively affect all VSP network doctors may run counter to over a dozen states' laws, setting the stage for a challenge by optometry's advocates.

Due to take effect Sept. 1, VSP's differentiated reimbursement policy for certain lens products and anti-reflective (AR) coatings will not only have the effect of restricting choice and undermining doctor-patient decision-making, but also breach patient protection laws on the books in 14 states, per an AOA assessment. In addition to these and other state affiliates challenging VSP's policy, the AOA directly petitioned for a postponement of this policy considering the ongoing COVID-19 public health emergency.

Announced the same day that U.S. coronavirus cases surpassed 1.8 million on June 1, the VSP announcement comes as a blow to many doctors of optometry only now settling into a "new normal" in resuming the full range of eye health and vision care services. Even now, as many states weigh additional restrictions with climbing COVID-19 cases, the timing of VSP's reimbursement cuts is highly questionable and AOA President William T. Reynolds, O.D., expressed as much to the vision plan.

In a virtual meeting with VSP President and CEO Michael Guyette on June 30, Dr. Reynolds urged the vision plan to reconsider its policy change or, at the very least, postpone its implementation until the COVID-19 public health emergency has passed.

"The COVID-19 crisis has wreaked havoc on optometry practices and the communities for which doctors of optometry provide their crucial eye health and vision care services, and to propose such a policy when doctors only recently began to settle into a new normal for this difficult time is beyond disheartening," Dr. Reynolds says. "The AOA and state affiliates will continue to uphold the high-quality care that doctors of optometry deliver and echo our members' frustration as we combat these and other flawed vision plan policies that interfere with the doctor-patient relationship."

Leaning into these patient protection laws and regulations, several state affiliates are actively challenging VSP's unilateral changes. States, such as Oregon and Kansas, reached out to insurance regulators or filed complaints, while still others issued letters of reproach.

In a July 8 letter to VSP, the Virginia Optometric Association (VOA) expressed "grave concerns" with policy changes that, in effect, force providers to encourage the use of VSP's own products but with no financial incentive on the part of the patient to make that change. The VOA noted these proposed changes could violate the state's noncovered services law, as the code is written that "reimbursement paid by the vision care plan carrier for covered services and covered materials shall be reasonable and shall not provide nominal reimbursement in order to claim that services and materials are covered services or covered materials under the applicable vision care plan."

The VOA letter continues: "We ask that VSP immediately withdraw the plans to differentiate payments to optometrists for certain lens products and anti-reflective coatings."

Even in states without such patient protection laws or regulations, affiliates are proactively contacting VSP to express concerns. While California spoke directly to VSP leadership, several other states, including North Carolina, initiated discussions or have ongoing dialogue with VSP. In Nevada's case, the board issued a July 1 letter to express misgivings over the plan's decision to lower fees when panel providers recommend, sell or prescribe certain non-VSP proprietary lenses. The Nevada Optometric Association (NOA) noted "fundamental conflict-of-interest principles" that could lead to increased consumer costs and decreased levels of care.

"Simply stated, this decision is another in a series of self-serving, strategic decisions, aimed at commandeering the eye care supply chain through vertical integration and predatory business practices," reads the NOA letter.

The letter continues: "The notion of a 'vision care health insurance company' forcing providers to prescribe primarily their proprietary products, or face serious financial consequences, undermines any fiduciary obligations established between the 'insurance company' and its members."

On June 1, VSP announced updates to its ophthalmic product formulary to include two new categories—preferred and nonpreferred—for AR coating, progressive and digital single vision lens products that would affect doctor service fees for all Signature, Choice and Advantage plans. VSP stated that doctor service fees will be reduced by approximately 50% for all nonpreferred brands but unaffected for preferred brands. These adjustments follow similar changes VSP made for photochromic lenses earlier this year; VSP created a 'Category A' and 'Category B' of photochromic lenses with the former receiving half the reimbursement of the latter, which contains VSP's own products.

While VSP's new policy changes provider reimbursement for the type of lens used, it does not affect the patient's payment. The AOA believes VSP's approach is designed to force doctors to use their branded lenses instead of what products might be best for the patient, either medically or financially.

Each year, millions of Americans rely on local doctors of optometry for their comprehensive vision and eye health care needs. While many patients have coverage for medical eye care through a health plan, roughly 200 million Americans have supplemental preventive eye exam and materials benefits through a vision plan.

Complementing states' efforts to disallow detrimental vision plan policies on the federal level is H.R. 3762, the Dental and Optometric Care Access Act (DOC Access Act). The bipartisan bill would prevent ERISA and other federally regulated vision and health plans from placing limits on a doctor's choice of labs and lenses, as well as levying mandates on noncovered services and materials. Additionally, the DOC Access Act would limit plan contracts to two years, unless the doctor chooses to extend, and includes a private right of action provision that allows doctors to take offending plans directly to court.

Visit AOA's Legislative Action Center to learn how you can take action in supporting legislation such as H.R. 3762.