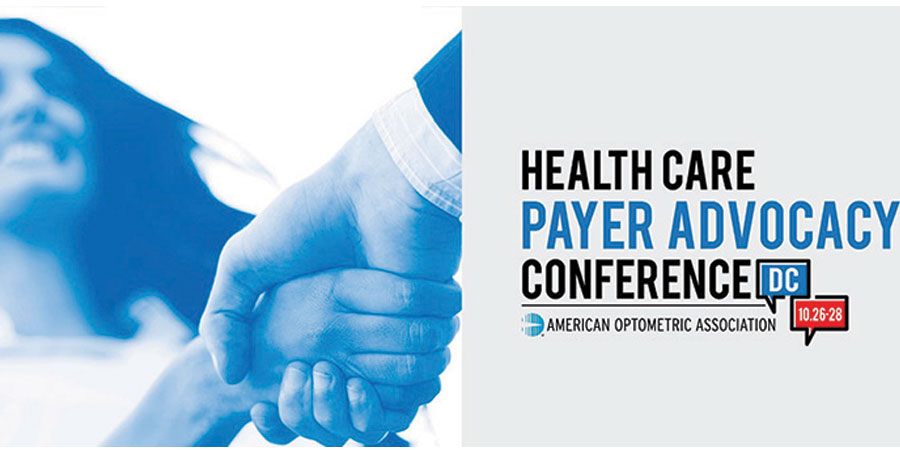 Current and evolving third-party challenges could come to define optometry's future should the profession be caught unaware. But optometry's advocates have no intention of letting that happen.

"We, together with each of you, are working across each of these fronts so that optometry can effectively address the eye health and vision public health crisis our nation faces."

At the direction of AOA President Samuel D. Pierce, O.D., and the AOA Board of Trustees, about 180 doctors of optometry and state affiliate representatives convened outside Washington, D.C., Oct. 26-28, to revive the AOA's biennial Health Care Payer Advocacy Conference (HCPAC) after a decade-long hiatus. A veritable meeting of the minds, the HCPAC assembled state Medicare carrier advisory committee (CAC) representatives, third-party advocates and experts, and affiliate leadership to address and prepare for emerging third-party issues stemming from a rapidly changing health care sector.

"AOA and your state associations are relentlessly fighting to ensure full recognition and fair treatment in the third-party arena, which are as essential to optometry's future as continued legislative, regulatory and media advocacy," Dr. Pierce told attendees. "We, together with each of you, are working across each of these fronts so that optometry can effectively address the eye health and vision public health crisis our nation faces.

"We can't stress enough how much we are accomplishing in advocacy and, on the converse, how much we need to do to continue our work in advocacy. As a regulated profession, it is critical that we all work together at the state and at the federal level."

Reconvened after so many years to address emerging payer challenges, the HCPAC's goal is to bolster third-party advocacy through enhanced networking opportunities and new relationships with medical directors; improve access and coverage polices for patients; promote fair reimbursement polices while finding ways to reduce regulatory and compliance requirements; and develop advocacy tools and solutions for Medicare and third-party payers.

Through general and breakout sessions led by doctors, staff and industry experts, the HCPAC offered real-world, applicable guidance that affiliates could use to enhance advocacy coverage and compliance tools, and encourage innovative approaches within and across state lines. From contract negotiation skills to legislative and third-party readiness, value-based medicine and diabetes care, these sessions offered the latest updates and strategies for success. Among those key topics included:

Barbara L. Horn, O.D., AOA president-elect, called the conference a perfect incubator for ideas that can help advance the profession's priorities and engage more patients in getting their annual, in-person, comprehensive eye examinations.

"A unique aspect to this gathering is that all of us are looking beyond today to identify optometry's opportunities with other groups and organizations, which is why it was a natural place for the AOA to kick off the conversation as part of our 2020: Vision for the Future Initiative," Dr. Horn says.

Aside from third-party challenges, experts also identified emerging opportunities: namely, diabetes. A disease that affects nearly 1 in 11 Americans and accounts for almost 1 in 4 U.S. health care dollars spent, diabetes attracts significant attention as a public health challenge that can be mitigated via a concerted, coordinated care approach.

Considering 3 out of 4 Americans with Medicare have diabetes or prediabetes, the NDPP was trialed as an intervention method and found beneficial to the test population, saving $2,650 over 15 months in reduced health care expenditures per individual. Building on that model, the Centers for Medicare & Medicaid Services (CMS) proposed its own Medicare DPP (MDPP) program shortly thereafter, and on April 1, 2018, CMS launched the program.

Doctors now may apply to become an MDPP supplier or identify and refer patients to such services, further bolstering optometry's role in diabetes care. Read more information about becoming a MDPP Supplier.

Provider-payer contract considerations also drew an engaged crowd as the AOA's Third Party Center (TPC) and industry experts imparted applicable lessons for affiliate leaders to share in their own states. Moderated by AOA TPC member Terri Gossard, O.D., and led by one of the nation's foremost attorneys on contract negotiations, Mark Kopson, Plunkett Cooney PC, the session addressed the difficulties and frustrations commonly associated with payer contracts and negotiations, as well as resolving disputes that may arise.

Unsurprisingly, the "600-pound gorillas" in the room are the plans themselves when contract negotiations revolve around key points, such as the ability of plans to impose unilateral contract changes. In those cases, Kopson advised doctors that before contracting they should do thorough homework about what both the doctor and payer will realistically bring. Additionally, Kopson suggested reviewing boilerplate or fine-print messaging, or unfavorable contract stipulations, such as discounts on noncovered services or other clauses that doctors may wish to attempt to negotiate.

These unpropitious contract requirements often mandated by vision and health plans are the kinds of conditions that AOA and affiliates hope third-party legislation can keep in check. To ensure doctors and patients reap the full benefits of states' patient access laws and other efforts aimed at reforming health and vision plan abuses, AOA continues to champion the Dental and Optometric Care Access Act (H.R. 1606).

This congressional session has seen the greatest support of H.R. 1606 to date with 103 bipartisan cosponsors backing the bill, thanks in large part to diligent grassroots support from optometry's advocates.

Not only a fundamental primer for state affiliates' third-party advocates and leadership, the HCPAC also assembled senior government officials from the Department of Health and Human Services, CMS and Medicare contractor Novitas to provide important policy updates. Those representatives included:

Steven Eiss, O.D., AOA TPC Executive Committee chair, says the HCPAC went above and beyond in meeting its two objectives: helping orient Medicare CAC representatives, and educating and encouraging states to communicate amongst themselves when encountering challenges.

"We hoped to create connections that would allow this to happen more easily, and I think we were successful on both levels," Dr. Eiss says. "The state representatives appreciated the time they had sharing ideas and strategies with each other; even our panelist 'experts' commented on how much they learned from their colleagues in attendance."

The HCPAC was a meeting that "got down to the brass tacks," one attendee told Dr. Eiss, and it's a format that the AOA plans to continue into its State Government Relations/Third Party Conference in 2019.