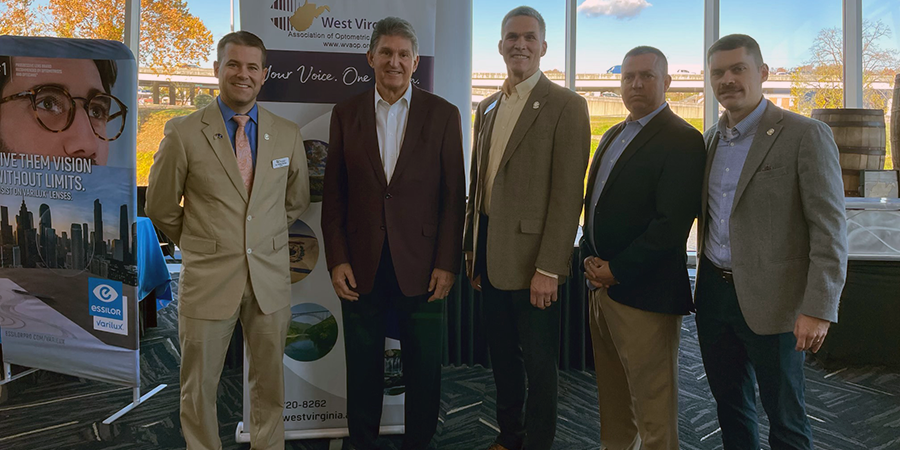 With the involvement this week of every state affiliate and hundreds of doctors, the AOA convened a Payer Advocacy Summit Nov. 15-16 to bolster legal challenges on behalf of doctors, compliance oversight by AOA attorneys and optometry-backed legislation before state legislatures and Congress, all focused on fighting back against the abusive policies of insurers and discount plans.

Fresh from his latest meetings with pro-optometry leaders on Capitol Hill, AOA President Robert C. Layman, O.D., opened the two-day, virtual gathering by citing an array of unfair tactics used by plans, their outdated understanding of patient eye health needs and their systemic undervaluation of essential care services as attacks on optometry practices across the country, including his own in Lambertville, Michigan, and made it clear that payer advocacy is a top profession-wide priority.

“The AOA’s message to elected officials, to regulators and to the plans themselves is that optometric care is essential, optometry’s role in health is expanding and the care we provide must be understood, respected and fairly valued,” Dr. Layman said. “Our organization’s greatest priority is and will continue to be ensuring that we get the respect we deserve and plans that violate the law or violate agreements will be held fully accountable.”

The summit, typically held in person but planned remotely this year, brings together optometry’s leading advocates in the third-party/payer arena, all experienced in taking on and winning reversals of plan misdoings in their states and regions. In addition to briefings on anti-trust law, an overview of plan issues facing other types of physicians, coding and billing insights and a robust discussion of new approaches to seek enforcement, AOA and state association leaders and AOA’s payer advocacy attorneys detailed key legal, regulatory enforcement and legislative initiatives doctors of optometry can support as well as other ways to increase scrutiny and share information about abusive plan policies.

Supported by Alcon, the Health Care Alliance for Patient Safety and Johnson & Johnson Vision, the summit was organized by the AOA’s Third Party Center (TPC), which advocates for the rights of member doctors in their interactions with health and vision plans, employers, insurance brokers and federal and state insurance regulators, so Americans have access to quality eye care through their choice of appropriate providers.

Vision plans offer supplemental, preventive eye exam and materials benefits for nearly 200 million Americans; however, nearly two-thirds participate in the two most dominant, vertically integrated vision plans. This lack of competition in the market, combined with special legal treatment—vision plans are not subject to many of the laws and regulations that apply to health plans—means plans dictate how doctors furnish services, thereby limiting patient choice and affecting costs.

In fact, an Avalon Health Economics report found that the concentrated nature of the vision plan market leads to higher overall costs with noncovered services mandates forcing doctors to compensate for the transfer of operating margins from doctors to plans. But aside from driving up costs, such mandates mean plans can insert themselves into doctor-patient decision-making and squeeze doctors’ reimbursements ever tighter.

Nearly three-quarters of doctors of optometry have not received an increase in fee schedule from their largest vision plan in at least five years, while more than a third report never receiving a rate increase, per the AOA Health Policy Institute (HPI). Such is the case; federal payers often reimburse better than commercial plans.

In 2020, the average fee schedule payment for eye exam codes was $114 by Medicare and $70 by Medicaid, yet vision plans typically paid anywhere from $35 to $90—often lower than Medicare’s rate from 15 years ago ($90) and a similar rate to what vision plans paid 25 years ago. Even Medicaid, recognized as the lowest payer in health care, may pay better than some commercial plans in indication that providers are contributing their services at below-market rates.

“Doctors may be expected to contribute to the public good by seeing Medicaid patients at reduced rates, but no such goodwill should be required to subsidize billion-dollar vision plans,” the AOA HPI notes.

Given their marketplace clout, and despite the public health emergency related to the COVID-19 pandemic, plans are able to reduce or even withhold fees to providers and limit choice to consumers in pursuit of increasing profits, a situation that has begun to draw the attention of policymakers. In 2020, a U.S. House Energy and Commerce Committee probe into insurers skirting pandemic-related consumer protection laws cast scrutiny on the nation’s vision plans for a “seeming financial windfall” due to excessively collected premiums during pandemic restrictions. In addition to outlining the legal loophole that allows vision plans to avoid spending at least 80-85% of their premium income on patient claims, as health plans are required to do, then-Rep. David Loebsack, D-Iowa, called for greater fiscal accountability and transparency.

Additionally, the Iowa congressman took exception not only with vision plans’ inequitable financial assistance to select eye doctors or practices and the limiting of such assistance to certain regions of the country but also unilateral reimbursement cuts.

“A plan to slash reimbursement rates to doctors primarily to gain a competitive advantage in the middle of a global pandemic appears to only be adding to the problems faced by Iowa patients and doctors and others across the country,” Rep. Loebsack noted, citing commercial vision plans’ stagnant fee schedules.

The AOA does not discuss prices charged by doctors of optometry with its member doctors or other competitors and does not make recommendations about whether doctors should accept contracts. The AOA also reminds doctors to make individual business decisions about the prices they charge and contracts they accept, and that doctors should not discuss prices or take collective action against a purchaser.

After optometry’s advocates successfully argued the insurer’s policy, Anthem will no longer unilaterally downcode ophthalmologic codes and instead agreed to reprocess and repay some previously downcoded claims.

Responding to an inquiry from a Maine-based optometry practice, Anthem Blue Cross Blue Shield of Maine President Denise McDonough wrote in a May 6 letter that claims submitted with the Current Procedural Terminology (CPT) code series 92000 would no longer be subject to the insurer’s evaluation and management (E/M) review process, and that Anthem would reprocess and remit payment (including interest, if applicable) for all claims with CPT code series 92000 impacted by that review. The AOA, in assisting the practice and its attorney, believes Anthem’s decision would likely apply to all states; however, the insurer stated it reserves the right to provide notice of inclusion of the CPT code series 92000 to E/M review in the future.

“Although we still have many issues with the downcoding program as a whole, removing the 92000 codes from this program is a good first step,” Dr. Eiss, emcee for the summit, said earlier. “We continue to encourage members to appeal any downcoding decisions where they feel the higher code is supported by the patient’s medical record. We will continue to advocate that any payers seeking to downcode any payments be required to view the medical record first.”

Further, despite the change regarding ophthalmologic codes, Anthem has reiterated its stance to continue “assessing” selected claims for E/M services—specifically, the CPT code series 99000—to ensure coding on these claims “aligns with the national industry coding standards.” However, the AOA still argues this process is inappropriate and not necessarily in line with the CPT coding and documentation requirements.

“Since then, AOA, affiliates and members have been working tirelessly to stop this practice,” Dr. Layman said at the summit. “We are keeping the pressure on and are making headway. We will continue to notify members when we have updates. This is one example of the power we have when we work together and why we are so excited for this summit.”

Introduced in the House by Reps. Yvette Clarke, D-N.Y., Buddy Carter, R-Ga., Darren Soto, D-Fla., and David McKinley, R-W. Va., as H.R. 3461, and in the U.S. Senate by Sen. Joe Manchin, D-W. Va., Kevin Cramer, R-N.D., as S. 1793, the bipartisan measure bolsters vision plan laws in 44 states by prohibiting ERISA and other federally regulated vision, dental and health plans from placing limits on a doctor’s choice of lab and enforcing mandates on noncovered services and materials.

The legislation also would limit plan contracts to two years, unless the doctor chooses to extend the contract for another term, as well as include a private right of action that allows individual doctors to take offending plans directly to court.