February 17, 2022
The agenda for AOA on Capitol Hill April 24-26 will be dominated by issues uppermost on member-doctors’ minds. Open to doctors of optometry and optometry students, register now. 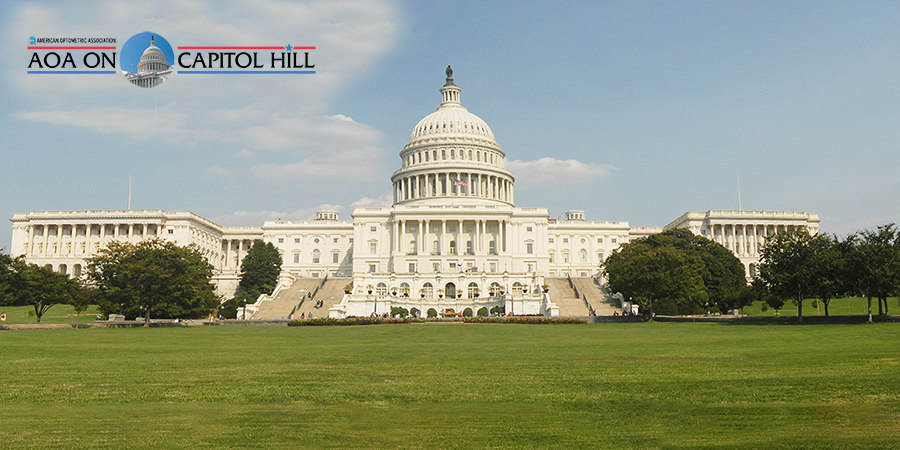 Aiming to turn up the heat this spring, optometry’s advocates will gather in Washington, D.C., with a reinvigorated focus on payer issues at AOA on Capitol Hill.

Registration is now open for the premier professional advocacy event April 24-26. Meeting topics will range from the push for passage of the bipartisan, bicameral Dental and Optometric Care (DOC) Access Act (H.R. 3461 / S. 1793) to advocacy on such matters as insurer discrimination against doctors of optometry and their patients.

At the meeting, there will be political-insider guest speakers, special briefings on the AOA’s top federal advocacy issues, and lobbying tips for the hundreds of attendees who will meet with their U.S. House and Senate elected leaders on the last day of the event.

Covering payer issues, there also will be an interactive town hall/panel addressing nondiscrimination issues, plus continuing education on billing medical plans before vision plans and a session educating members on compliance with such key federal laws as the Health Insurance Portability and Accountability Act (HIPAA), the Americans with Disabilities Act, and the Stark Law and Anti-Kickback Statute.

The AOA is mobilizing its members and other national doctor groups to educate and inform Congress now and in the lead-up to an in-person AOA on Capitol Hill.

“I think the significance of the agenda is that payer issues are an area of utmost importance to AOA and its member doctors of optometry,” Steven Eiss, O.D., chair of the AOA Third Party Center Executive Committee, says. “Our priority legislation turns the tables on vision plans and ushers in an era of greater oversight. Health plan discrimination also will be a theme of the conference. It is of great importance for us to emphasize the need for optometry to be included as an essential part of health care panels to be able to seamlessly provide needed eye care for their patients. And we must emphasize the need for vision plans to begin to put the patient’s care above their own profits.”

The DOC Access Act adds federal protections in every state, including 44 states with state laws on the books, by applying a federal standard to federally regulated plans that would disallow detrimental policies by ERISA and other federally regulated vision and dental plans, namely, limiting doctors’ choice of labs and mandating noncovered services and materials. Further, the bill would limit plan-doctor agreements to two years—unless otherwise indicated by the doctor—and includes a private right of action that allows doctors to take offending plans to court, rather than rely on regulators to take action.

While many patients have coverage for medical eye care through a health plan, roughly 200 million Americans have supplemental, preventive eye exam and materials benefits through a vision plan. However, the two most dominant vision plans provide coverage to roughly two-thirds of Americans, creating a circumstance where there is little competition in the market with these vertically integrated plans. As a result, the plans can impose policies through provider contracts that aren’t in patients’ best interest and often blow back on doctors.

“There is a growing desire among AOA members and an appetite on Capitol Hill to better ensure that the practices and policies of insurers and plans work better for patients and their doctors,” Dr. Theaker says. “Many optometrists are tired of plans dictating what doctors must charge patients for services and materials not covered by the plan, and the requirement that doctors use specific laboratories to make their glasses. A focus of the meeting will be to put more energy than we ever have on taking the fight to abusive vision plan dictates by advancing the AOA- and American Dental Association-backed DOC Access Act.”