October 3, 2019
More than 200 doctors of optometry take advocacy to the next level at 2019 State Government Relations/Third Party National Conference in Dallas. 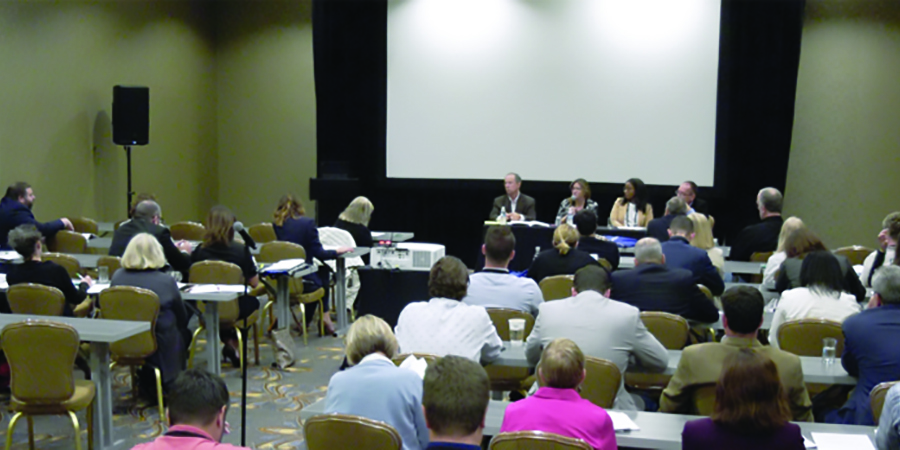 When it comes to the AOA making inroads on scope expansion and payer parity, there is no substitute for putting in the roadwork required to advance the profession of optometry and patient care.

Don't let what you've learned this weekend be the end, let it be the beginning.

A passion for the profession and patients drove more than 200 volunteer doctors of optometry, plus state leadership, AOA staff and guest speakers, to the State Government Relations/Third Party National Conference Sept. 27-29 in Dallas.

2020 is optometry's year and members need to be equipped to advocate in the face of headwinds ahead, AOA President Barbara L. Horn, O.D., said in welcoming conference attendees.

"Since we last had this meeting (in 2017), to no surprise, the whole playing field has shifted and evolved," Dr. Horn said. "And each of you, working with AOA, have been nimbly anticipating and addressing the obstacles and opportunities facing our profession and patient access to the quality care we deliver. It has been a whirlwind.

"This weekend, we come together to collaborate and identify new ways to break through and enhance our ability to deliver care," Dr. Horn said. "Amazingly, we are already in the swing of the coming year's election and one thing is crystal clear—health care access is at the center of the discussion and will be a pivotal debate for our country's future. It is at these times that optometry has demonstrated its strength in upholding the important primary eye health care we deliver and the need for doctors of optometry to be fully recognized and to have full authority to practice the medicine we were trained to deliver."

Doctors of optometry found plenty of advocacy resources to access, to engage and to energize them.

First, there was the conference's opening guest speaker Texas Attorney General Ken Paxton. Paxton's AG Office announced in 2018 that it had secured assurances of voluntary compliance from 37 store owners and distribution companies.

Second, doctors spent most of the conference immersing themselves on a range of topics designed to make optometry's case and make a difference to the profession, including breakout sessions on:

The more knowledgeable and equipped doctor-advocates are, the better state affiliates and the AOA are positioned to win scope battles, Dr. Wolfe says.

That work starts at conferences such as this, Dr. Wolfe says.

"There are no magic bullets for passing legislation," he says. "It requires true grassroots where many members have developed real friendships with candidates and legislators, who share our view that the public should have access to the best professional eye care possible."

Steven Eiss, O.D., chair of the AOA's Third Party Center Executive Committee, agrees. "We see this conference as an opportunity to connect with the state affiliates to help them build and strengthen their own third party committees," Dr. Eiss says. "We hope that the training and information provided will help them advocate on a state level and take care of payment and discrimination issues quickly and effectively. "The initial feedback from attendees has been very positive that the education and tools we provided will help strengthen their advocacy efforts going forward," Dr. Eiss says. "Of course, the AOA Third Party Center is there to assist on the state level when needed."

Make a plan-and a difference

In closing remarks, William T. Reynolds, O.D., AOA president-elect, thanked members for sacrificing their time to attend the conference and urged them to practice what had been preached.

"As leaders of this profession, we have the option of trying to react to and make the best of these changes (on the health care landscape) or we can become proactive, take action and advance our profession and improve our patients' care," Dr. Reynolds said.