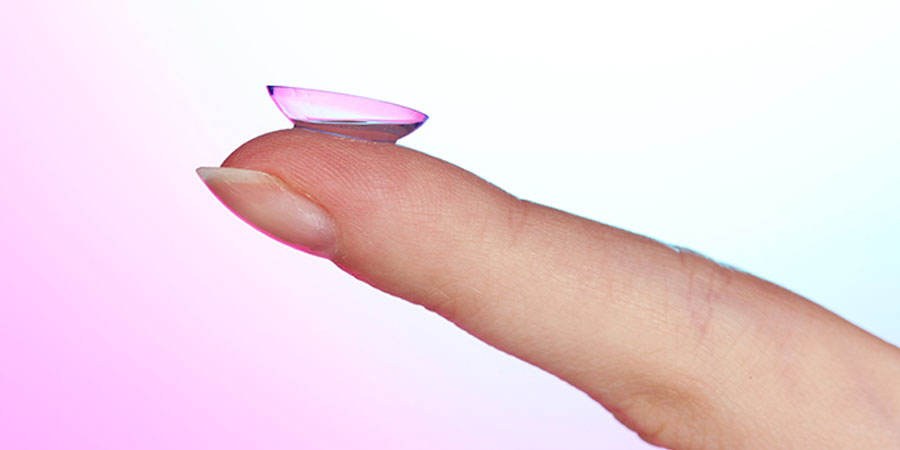 British researchers are optimistic that rose-tinted contact lenses may provide individuals with color vision deficiency (CVD) alternatives to consumer optical assistance devices, yet are they practical?

Published in the journal Advanced Healthcare Materials, the study describes rhodamine-dyed contact lenses that filter out specific wavelengths of light, making it easier for people with red-green CVD to distinguish between the colors. Researchers believe such an option could pave the way for a more affordable, less cumbersome alternative to consumer color-filtering glasses that help bolster tonal distinction that patients otherwise wouldn't experience.

Typically congenital, CVD is the inability to distinguish amongst certain shades of colors—reds and greens, and less commonly, blues and yellows—due to limited or lost functioning of photopigments within the retina. Occurring in as many as 1 in 12 men and 1 in 200 women worldwide, CVD cannot be cured if congenital. But tinted lenses can be used to heighten color discrimination.

That's why researchers at the University of Birmingham investigated coating contact lenses in a nontoxic, fluorescent rhodamine dye that absorbed wavelengths of light between 545 and 575 nm. This effectively blocks the common region of the red-green wavelength band and prevented both optical cones triggering simultaneously, with the added benefit of using contact lenses that permitted an entire corrected field of view over eyeglasses.

Per the study, researchers enrolled both normal color-sighted and red-green CVD individuals to test the effects of the dyed contact lenses using an Ishihara test. Although all participants identified improvement to the colors of their surroundings, levels of improvement among CVD individuals varied substantially. So, too, researchers found several self-declared CVD subjects weren't only red-green, but blue-purple deficient, as well. This actually reduced the dyed lenses' effectiveness.

Regardless, researchers concluded the dyed contact lenses were safe to be used on the eye, observing no toxicity after a 72-hour culture. That said, researchers observed a substantially lower flow of tear solution, something to be considered before further clinical trials. But they hope their study could be a stepping stone toward further CVD management devices.

"We are now looking into using a similar process to correct purple-blue color blindness, and also to bring together a number of dyes to make lenses perform for both red-green and purple-blue color blindness simultaneously. We are about to commence human clinical trial shortly," noted lead researcher, Haider Butt, Ph.D., from University of Birmingham's Institute of Healthcare Technologies.

However, this British study is neither the first to consider using contact lenses as a CVD optical aid nor the first to market such a device for everyday life. Terrace Waggoner, O.D., a researcher specializing in color-vision testing with the U.S. Navy, recalls several products on the market for decades claiming to "correct" colorblindness through red-tinted lenses, in both contact lenses and eyeglasses. Of course, CVD cannot be corrected; the U.S. Food and Drug Administration (FDA) reiterated as much when it cleared for market a previous CVD optical aid in 1999.

At that time, the FDA had fielded numerous inquiries about the optical aid's "misleading" promotion, and commented: "The lenses do not help wearers perceive or appreciate colors as people with normal color vision do, but merely add brightness/darkness differences to colors that are otherwise difficult or impossible to distinguish."

Essentially, that's what current and proposed CVD optical aids provide users. While it's certainly helpful that an optical aid can bolster an individual's ability to distinguish colors, it's not the end-all answer. Dr. Waggoner stresses the importance of considering real-world application of such devices. Although such optical aids might allow some individuals with CVD to pass a color-vision test, their practicality might be limited in an occupational setting, such as a pilot.

"You need to show, using scientific methods and performance-based testing, that any aid claiming to correct a color-vision deficiency actually works or is proven to be beneficial," Dr. Waggoner says.

Read more about color vision deficiency in the March 2017 edition of AOA Focus.