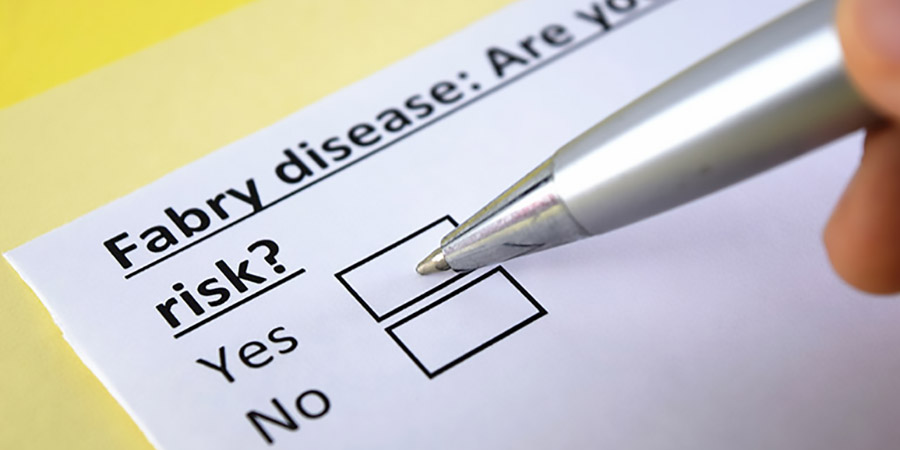 Clues to a life-threatening genetic disorder may be found in rare ocular surface lesions—conjunctival lymphangiectasia and cysts (CLC) may correlate with fluid cysts in the kidneys, prompting researchers to speculate whether these easily observable lesions could serve as noninvasive biomarkers.

Published in the British Journal of Ophthalmology, an investigator-initiated study detailed how CLC, while rare in the general population (lymphangiectasia accounts for 1% or less of conjunctival lesions and 5-8% of all conjunctival cysts), occurred at a much higher than expected rate in a cohort of patients with Fabry disease (nearly 85%). Additionally, researchers discussed a potential link between CLC and dry eye syndrome that may be impacted by corneal dysesthesia and lacrimal insufficiency due to Fabry-associated neuropathy and dysautonomia, warranting a thorough history of ocular symptoms and observation of ocular signs in all patients, especially when non-ocular findings are consistent with Fabry disease.

A rare, inherited X-linked lysosomal storage disorder created by faulty glycolipid metabolism, Fabry disease is characterized by the continuous buildup of unmetabolized globotriaosylceramide (Gb3), resulting in cell abnormalities and organ dysfunction. There are two major disease phenotypes—type 1 "classic" with childhood onset and the most severe disease, having little or no α-galactosidase A (α-Gal A) enzyme function, and type 2 "late onset" with some residual α-Gal A activity, midlife onset, and more variable systemic effect between individuals. Both Fabry types can lead to progressive kidney damage, cardiac disease, stroke and premature death.

Estimates suggest that Fabry disease affects 1 in 40,000 to 60,000 males and an unknown prevalence among females, yet recent studies propose late onset may be up to 16 times more prevalent in both males and females. The earliest observable manifestation is a bilateral keratopathy, found in over 99% of males and up to 90% of females with classic forms of Fabry disease.

However, these keratopathies aren't the only ocular manifestations present in Fabry patients, according to optometric clinical researchers Melanie Sivley, O.D., and William J. Benjamin, O.D., Ph.D. They point to recently discovered conjunctival lymphangiectasia and lymphangiectatic cysts in a cohort patient population, and previously recognized vascular dilation, telangiectasia and capillary "sausaging" in the conjunctiva.

Per their study, researchers examined 13 adult patients—eight males and five females—with classic Fabry disease, all being treated with enzyme replacement therapy (ERT) in the Fabry Clinic at the University of Alabama at Birmingham (UAB). The mean duration of ERT in this cohort was 8.4 years while the classic Fabry mutations included Q283X, R227X, W236X and W277X.

Significantly, CLC was observed in 11 of 13 subjects with clinical presentations including single and confluent fluid-filled cysts, sausage-like beaded dilations, and areas of conjunctival edema. Bilateral cornea verticillata were confirmed in each patient. Researchers note that six of the seven males with CLC and one without CLC had lymphedema of the lower extremities, while five of the six males with peripheral lymphedema also had eyelid edema. Three of the female patients had lower limb lymphedema, one of whom had eyelid edema.

Additionally, 10 of the 13 subjects had Fabry-related cataracts, while 12 subjects exhibited clinical signs of dry eye (nine of whom were symptomatic), including meibomian gland dysfunction, reduced tear break-up time, and superficial punctate keratitis or a combination, the study notes.

"The nephrologist can perform renal ultrasound or biopsy the kidney to see how much the disease is affecting its structure, and some of the things they observe in the kidneys of Fabry patients are fluid cysts," Dr. Benjamin says.

Adds study author and former UAB Associate Professor Dr. Sivley: "It is unclear whether fluid cysts in the kidneys represent lymphatic fluid buildup analogous to that in the conjunctiva. But there does appear to be overlap because of the prominence of kidney involvement in Fabry disease."

Whether that fluid buildup is lymphatic in nature is how the discussion surrounding CLC in Fabry patients began, Dr. Sivley notes. Colleagues at UAB, Nephrologists David G. Warnock, M.D., and Eric Wallace, M.D., note that cysts appearing on ocular images of Fabry patients looked similar to those depicted in kidney ultrasounds.

Reviewing patients in that new light, Dr. Sivley says there was a "preponderance" of classic Fabry patients who had some form of CLC, ranging from small, bubble-like cysts to the "string of pearls" configuration (interconnected cysts), clusters of individual cysts resembling "fish eggs," and large, lymphatic channel distensions. Dr. Sivley surmises that lymphatic stasis within conjunctival lymph vessels has something to do with obstruction of the exit endothelial drain valves by Gb3, and this may be similar to what happens in the kidneys.

"Lymphangiectasia and fluid cysts of the conjunctiva may be related to those in the kidney, and if you could identify them on the surface of the eye—if they're correlated—it might give a glimpse at what is happening to the rest of the body," according to Drs. Sivley and Benjamin. Ideally, an ultrasound and an examination of the conjunctiva could help mitigate the necessity of a kidney biopsy, Dr. Benjamin says.

Adds Dr. Sivley: "A noninvasive surrogate biomarker would be so much better for patients than the invasive and painful kidney biopsy. Ultimately, that's our goal: To investigate the ability for surrogate ocular biomarkers for Fabry disease presence, severity, progression and response to treatment."

Fabry disease is a treatable disorder that causes multi-organ dysfunction that necessitates a lifetime of comprehensive, multidisciplinary treatment to promote quality and quantity of life. While prenatal diagnosis is possible, often classic Fabry patients aren't diagnosed until keratopathy, angiokeratomas or proteinuria are detected, or symptoms of acroparesthesias, unexplained fevers, fatigue, hypohidrosis, heat intolerance and gastrointestinal problems emerge in early childhood and adolescence. Kidney failure, heart disease and early stroke can occur from young adulthood to middle age, and later in those with non-classical forms of Fabry disease. As a systemic disorder, it's important for doctors of optometry to consider this range of symptomology and refer cases to a specialist, such as a nephrologist or geneticist, for further evaluation and counseling.

To that point, Dr. Benjamin says it's important that doctors of optometry are attuned to this potential new finding as another aspect of Fabry disease and realize that, by the time CLC is observed, a patient may have significant or detectable problems elsewhere in the body.

"Doctors of optometry may be hesitant to offer their findings to an M.D. community because that relationship hasn't always been favorable," Dr. Sivley says. "This is a multifactorial, multisystemic disorder and the interprofessional care team must work together."