October 30, 2019
Doctor of optometry recommends helping young tech users and their parents develop a lifelong habit of managing their device use. 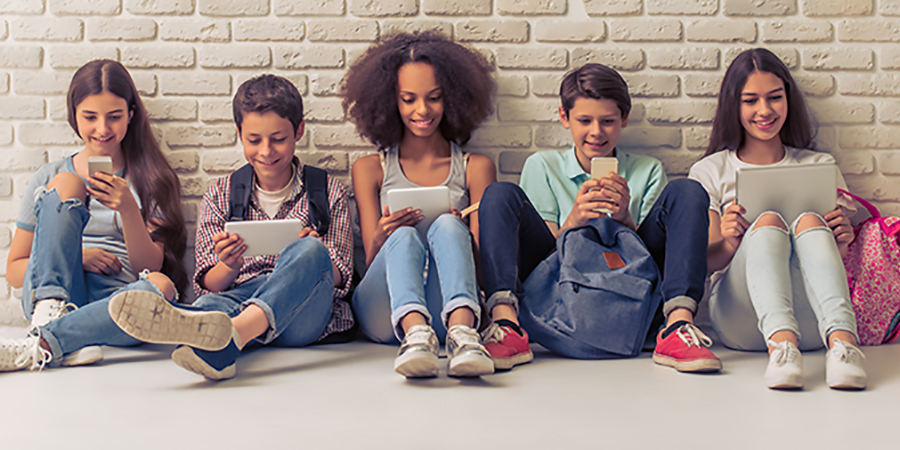 Just this week, the media advocacy group,  Common Sense, issued a report on media use by young people. Its 2019 census found, among other things, that U.S. tweens and teens are still spending a good portion of time daily looking at screens: 8- to 12-year-olds now average nearly five hours of screen media a day (4:44), and teens from 13 to 18 view more than seven hours (7:22) per day. That doesn't even include the time they put in doing homework on their devices, the census' authors note.

While half of teens still read for fun at least once a week, nearly a third of them say they read for pleasure less than once a month. The study, which updates a 2015 Common Sense report, is based on a national representative survey of more than 1,600 young people from 8 to 18.

"The study (released Oct. 29) shows worrisome indicators as our most vulnerable population—our kids—are spending a lot of time on unregulated, unrated platforms that deliver content that can be inappropriate or even dangerous," said James Steyer, Common Sense's founder/CEO. "And the shift from TV to online viewing means kids are often watching content alone, and there are fewer opportunities for shared experiences with family."

Over the past two years, Glen Steele, O.D., has been tracking a marked increase in the magnitude of changes in pupil size and the number of children showing this pattern. An increase in pupil size does not happen in isolation, Dr. Steele says, so he also was concerned about what was happening with other body processes, such as accelerated heart rates, widened bronchial passageways, constricted blood vessels, perspiration and raised blood pressure. He has linked this to children's use of cellphones and tablets.

He is not alone. "There are many individuals, groups and organizations looking at this phenomenon," says Dr. Steele, long-time advocate for children's vision. He has taught and provided patient care at Southern College of Optometry in Memphis, Tennessee, for 50 years.

In particular, Dr. Steele has taken note of enlarged pupils—extremely large pupils between 7 and 10 millimeters that may respond to light but not to accommodation—among some of the younger patients he sees. Enlarged or dilated pupils can be caused by a number of factors: medications, drug use, eye and brain injuries, recreational drug use and eye diseases. But the consistent factor among his patients, he says, appears to be prolonged phone or tablet use.

"In past years, I would see maybe one congenitally large pupil a semester," Dr. Steele says. "Now I see five or six a day in a pediatric population (our clinic defines pediatric as birth to 12 years of age). This is a significant change in the number seen in a very short time frame. I have tried to link it to medications and other things but the most consistent has been device use.

"I call this pattern of large pupil size defocus," he says. "Pupils are smaller during focus and larger during defocus. One can imagine how a pattern of defocus could interfere with the ability to perform in the classroom and other activities requiring focus, such as school work. Because I have only noticed this pattern for the past 18 months to two years, I do not know what the long-term effects will be as there has been very little time to study it and its effects on other sympathetic body processes.

"Defocus only occurs when we're scanning on social media or gaming," Dr. Steele says. "If reading, there is more tendency to focus, but it is easy to tell when I walk into the room and take a look at pupils with my retinoscope. It is more scanning during social media or playing a game, in which you have to be aware of the 'attackers' in a video game coming from all directions. You can't stop and look at them or something will attack you from another direction. This is the origin of the defocus pattern.

"When this pattern is present, one must suspect some type of video game syndrome," he says. "The problem is not in the eye directly, but it is affecting sympathetic responses that are shown in the eye."

Other ocular and developmental consequences from extended screen time, according to Dr. Steele, include:

Trading a bad pattern for a good pattern

Last April, the World Health Organization (WHO) released its recommendations on physical activity, sedentary screen time, and sleep for children. Among them were the following guidelines for screen time:

"I recommend taking this a step further," Dr. Steele says.

With the WHO guidelines in mind, he shares with his young patients and their parents the following tips he developed:

"The purpose of the recommendations is that we help children develop a lifelong pattern of taking breaks from device use," Dr. Steele says. "Younger children should take breaks in shorter time frames, whereas teenagers and adults can go longer between breaks. The use of tablets in all walks of life is not going away, so teaching kids how to manage their screen time at an early age has potential long-term benefits.

"Parents should set an example with their own use of devices," he adds.