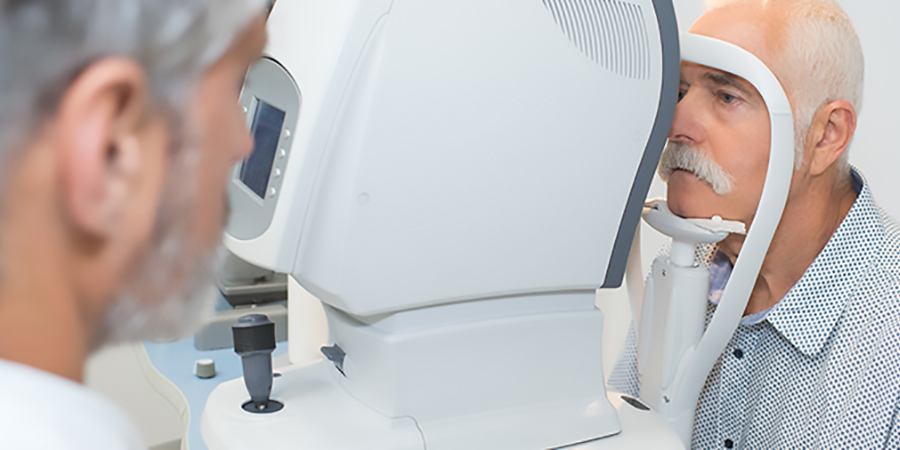 Published in the journal Ophthalmology, a systematic review of available evidence identified 30 studies that examined the relationship between spectral-domain optical coherence tomography (SD-OCT) measurements of the retinal structure with Alzheimer's disease (AD) and mild cognitive impairment (MCI). The meta-analysis determined that a number of SD-OCT measurements were significantly thinner among AD patients as compared to control groups, suggesting these retinal biomarkers might be integrated with other clinical and imaging biomarkers for early AD detection.

However, pathologic changes begin well before onset of cognitive decline, and the slow, progressive nature of AD means patients aren't often diagnosed until late in the disease course when irreversible neurodegeneration and vascular damage already occur. That's why AD patients may only live four to eight years after diagnosis. Likewise, it's why emerging evidence of OCT's potential utility in risk assessment or even early detection proves so promising.

Per this recent meta-analysis, researchers scanned literature dating prior to 2018 and settled upon 30 eligible studies—all of which were cross-sectional studies—that involved 1,257 AD patients, 305 MCI patients and 1,460 controls. These studies specifically assessed the associations between AD, MCI and measurements of SD-OCT, including ganglion cell-inner plexiform layer (GC-IPL), ganglion cell complex (GCC), macular volume and choroidal thickness, as well as retinal nerve fiber layer (RNFL) and macular thickness.

"Retinal ganglion cells, the cells responsible for consolidating visual information and transmitting them to the brain directly via the optic nerve, share similar properties with the cerebral neurons," authors write. "Fewer RGCs in AD is consistent with the hypothesis that the pathologic cascade of AD affects both the cerebral neuron and the RGCs in the retina, leading to loss of RGCs over time."

"In addition to thinner neuronal layers in the retina, we observed that the choroidal thickness measured by SD OCT also was significantly thinner in AD. Because cerebral vascular impairment is recognized as one of the earliest pathologic features in AD, similar pathophysiologic processes also may affect the choroidal layer, which is the vascular layer of the eye."

Despite the findings, researchers note all studies to date were cross-sectional with a lack of prospective studies and called for additional research to generate more certainty. Still, the promise of OCT in potentially identifying retinal biomarkers of AD proves enticing.

"In the future, SD-OCT may be used clinically as a risk indicator to stratify individuals with high risk of AD developing who then can benefit from further investigations, including amyloid positron emission tomography imaging and detailed neuropsychological assessments."

Taking the next steps

Early detection and monitoring of preclinical cognitive decline are goals that AD researchers continue to strive toward, and such evidence suggests that retinal microvasculature may provide that in vivo, non-invasive, neurological health proxy that could help clinicians make critical care decisions. For as much published research details these associations, the Alzheimer's Association is keen on continuing these investigations—and the AOA is taking a vested interest in these efforts.

In May, the AOA joined other leading researchers in a workshop sponsored by the Alzheimer's Association to lay the groundwork for a large-scale study of early detection and monitoring of MCI and AD through retinal/ocular imaging. Michael Duenas, O.D., AOA chief public health officer, was optometry's sole representative to the nine-member subcommittee that brought together over 90 researchers from nine different countries.

As Dr. Duenas explains, researchers are striving for detection and monitoring techniques with high sensitivity. With increasing AD prevalence and current diagnostic methods often inaccessible, invasive and cost-prohibitive (e.g., MRI, cerebral spinal fluid examination or PET), noninvasive and accessible OCT and OCT-A can become a mainstay toward early detection and the provision of evidence for effectiveness of potential treatment.

"Optometry is the most accessible eye care profession and that accessibility paired with technology and understanding of early cognitive decline is going to be essential in raising our patients' health outcomes and preventing or slowing neurodegenerative disease," Dr. Duenas says.