Restoring sight to the blind? Study shines light on optogenetics in RP

June 10, 2021
A new study reports partial recovery of visual function in a patient with late-stage retinitis pigmentosa using optogenetic therapy, a first for researchers looking into the neurodegenerative disease. 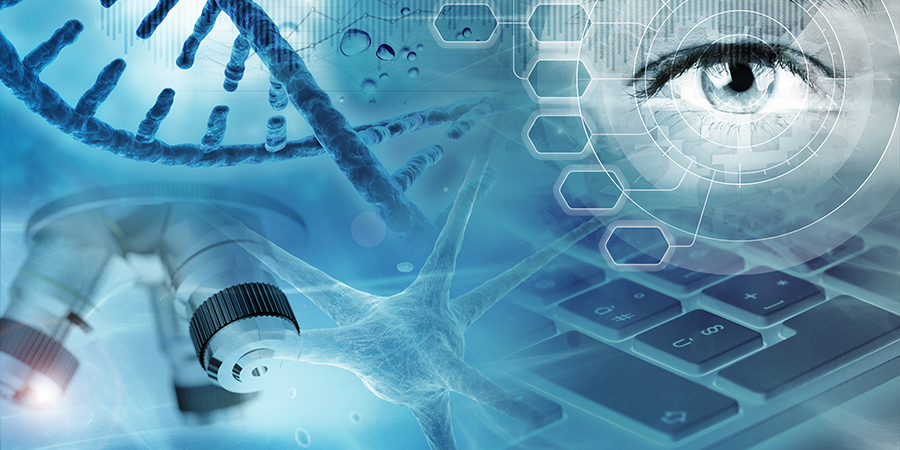 Even slight changes in visual perception for patients stricken by retinitis pigmentosa (RP) can make a world of difference, which is why a new study examining optogenetic therapy shows promise.

Published in the journal Nature Medicine, the study described how an experimental optogenetic therapy that combines intraocular injection of a channelrhodopsin protein with light-stimulating goggles enabled a subject with late-stage RP to perceive, locate, touch and count different objects. Significantly, this marks the first reported case of partial functional vision recovery in late-stage RP using optogenetic therapy—and its ramifications have generated headlines worldwide.

A rare, genetic disease that deteriorates the retina’s photoreceptor cells, RP progressively erodes vision from childhood onward with blindness often occurring around age 40. Affecting more than 2 million people worldwide by some estimates, RP is caused by mutations in more than 71 different genes. Except for a single gene replacement therapy for RP mutations in the RPE65 gene, there is no cure or approved therapy for RP.

Such is the case, an international team of researchers from the U.S., U.K., France and Switzerland sought to determine whether the relatively newer field of optogenetic study could minimize RP’s effects. Employing optogenetics, the genetic modification of neurons to render them light-sensitive, researchers bypassed the damaged photoreceptor cells and targeted retinal ganglion cells to create a different visual pathway.

Reporting on the findings of a single patient from the Phase I/II PIONEER study, researchers describe a 58-year-old male, diagnosed with RP 40 years prior, with visual acuity limited to light perception. His worse-seeing eye was treated with the optogenetic injection while the other remained a control. Nearly a year after initial gene therapy that included a seven-month vision training period with the light-stimulating goggles, the patient was asked if he could perceive, locate and touch various small objects with and without the goggles.

“The patient testified to a major improvement in daily visual activities, such as detecting a plate, mug or phone, finding a piece of furniture in a room or detecting a door in a corridor but only when using the goggles,” the study notes. “Thus, treatment by a combination of an optogenetic vector with light-stimulating goggles led to a level of visual recovery in this patient that was likely to be of meaningful benefit in daily life.”

The study concludes that given the evidence presented, optogenetic stimulation of human retinal ganglion cells by a light-projection system linked to a camera could be a “promising way to restore vision in blind patients affected with advanced RP.”

The potential in optogenetic therapy

Rachelle Lin, O.D., an assistant professor at Southern California College of Optometry at Marshall B. Ketchum University, who not only treats patients in the Low Vision Center at the University Eye Center at Ketchum Health but also conducts genetic testing for inherited retinal dystrophies (IRDs) and lectures on the subject, says the reported findings in this study are significant. Unlike the current U.S. Food and Drug Administration-approved gene therapy for mutations only in the RPE65 gene, Dr. Lin explains, the described optogenetic therapy is mutation-independent and demonstrates the sight-restoring possibility of such therapies for patients with severe vision loss.

“There are numerous genes associated with syndromic and non-syndromic RP,” Dr. Lin says. “The current FDA-approved gene therapy is only indicated for patients with mutations on the RPE65 gene. Likewise, the other ongoing gene therapy and CRISPR gene editing trials also target specific genes. One major difference from a patient eligibility standpoint is that optogenetic therapy is mutation independent. Therefore, who aren’t eligible for the other interventions based on their identified gene mutations could potentially be eligible for optogenetic therapy.”

“This case is encouraging because it supports the patient’s reported improvement in functional vision for daily activities. At the same time, it’s worth recognizing that the partial improvement in vision was only appreciated while the patient used the goggles after injection with the optogenetic vector and training. Patients with this advanced level of RP will still need continued low-vision services,” Dr. Lin notes. “Optometry is especially poised to make a difference in this developing field by identifying candidates for clinical trials, educating patients on new treatment developments and coordinating continued low-vision management.”

Learn more about what it takes to incorporate genetic testing and therapy in the optometric practice in the upcoming July/August issue of AOA Focus.

Low vision exacts an enormous psychosocial and economic toll on patients, their families and society with nearly 3 million Americans, age 40 and older, living with some form of low vision. These patients can easily spiral into depression at their loss of independence, purpose and hope; however, low-vision services offer patients a way to maximize the vision they do have via specialized adaptations or devices.

Optometry plays a leading role in providing low-vision care, often alongside a multidisciplinary care team, yet such services do require a different approach than a routine medical eye exam. Visit the AOA’s doctor locator and select “low vision” specialty to find a colleague in your area who provides low-vision services.

So, too, doctors can keep reading for more information about the practice of low vision, clinical considerations and new coding and documentation requirements for evaluation and management services taking effect this year.

Register to attend the virtual AOA Vision Rehabilitation Forum, Thursday, June 17, at 8 p.m. ET. The featured lecture will focus on gene therapy for inherited retinal diseases and its impact upon individuals with vision impairment. As an AOA member benefit, 1 hour of COPE-approved continuing education credit will be offered.

Interested in learning more about optometry’s role in genetic testing and therapy? Dr. Lin offers several educational courses on these topics at Optometry’s Meeting®, June 24-28, in Denver, Colorado. Or, read these four points of consideration for doctors weighing genetic testing or therapy for patients with IRDs.

The featured lecture will focus on gene therapy for inherited retinal diseases and its impact upon individuals with vision impairment. As an AOA member benefit, 1 hour of COPE-approved continuing education credit will be offered.
REGISTER TODAY
Clinical Eye Care
Share This
Related News
Diseases and Conditions

Diabetes was once viewed as a disease of older adults. The U.S. recommended in March that, given such risk factors as obesity, age, family history and a sedentary lifestyle, at-risk Americans should be screened for prediabetes and type 2 diabetes starting at age 35. Now, studies show that cases of diabetes among youth in the U.S. have surged.

Could optometry unlock secrets to cognitive health? What the research says

The 15th century polymath Leonardo da Vinci quipped, “the eyes, the window of the soul.” He couldn’t know the half of it. Only now, with 21st century technology, are researchers unlocking the secrets of the retina—and the brain. The search for retinal biomarkers of neurocognitive disorders is returning results, and optometry may hold a piece of the puzzle.

Level up your diabetes care with specialists, services collaboration

The AOA HPI offers information about providing integrated, person-centered diabetes self-management care and education through partnerships with community opportunities and other specialists.