August 13, 2018
Today, the diagnosis and management of meibomian gland dysfunction is revolutionizing how doctors of optometry treat dry eye disease. 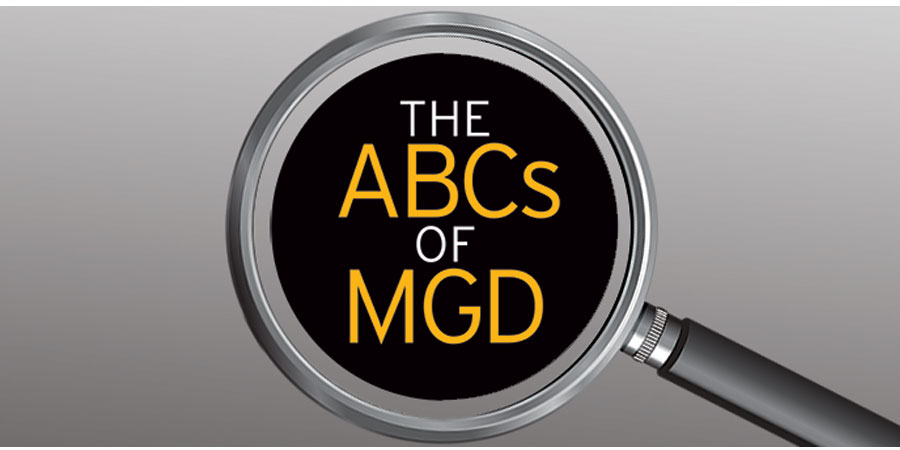 Excerpted from page 34 of the July/August 2018 edition of AOA Focus.

When Mile Brujic, O.D., was an optometry student 16 years ago, meibomian gland dysfunction (MGD) was but a footnote in his textbooks and lectures. However, over the years, as he practiced in Bowling Green, Ohio, Dr. Brujic saw the research literature on the subject grow and the stature of MGD flourish. Today, MGD is recognized as the primary pathology behind the ubiquitous dry eye disease, which produces symptoms that send many patients to their doctor of optometry in search of relief from dry, red and inflamed eyes.

In Dr. Brujic's office, MGD's treatment and management is now an essential element of the comprehensive eye examinations he provides for patients.

A reversal of thinking

Under-recognized. Untreated. That was how MGD was described a mere seven years ago by Kelly Nichols, O.D., M.P.H., dean of the School of Optometry at the University of Alabama at Birmingham (UAB).

In the late 1970s and early '80s, clinician scientists recognized that malfunctioning meibomain glands played a role in ocular surface disease. Donald Korb, O.D., and Antonio Henriquez, M.D., were the first to coin the term "meibomian gland dysfunction" in the Journal of the American Optometric Association. Dr. Korb holds dozens of ocular surface-related patents, has founded companies and is highly and widely regarded as one of the leading authorities on MGD and dry eye disease.

In 2011, the Tear Film & Ocular Surface Society (TFOS) released a report on the international work on MGD, which defined it, classified it and said it "may well be the leading cause of dry eye disease throughout the world."

Then TFOS released its landmark 2017 Report of the International Dry Eye Workshop (DEWS ll) and identified MGD as the "most common cause of dry eye." Dr. Nichols served as co-chair of the DEWS ll subcommittee on definition and classification and wrote the introduction to the 2011 MGD report.

Caroline Blackie, O.D., medical director for dry eye at Johnson & Johnson Vision and longtime collaborator of Dr. Korb, has been on the front lines of MGD research. Drs. Korb and Blackie have long argued that doctors of optometry should look for MGD first and the management of most dry eye will follow.

"That statement in 2011 changed everything," Dr. Blackie says. "Until that time, the overriding thinking had been that dry eye is an aqueous deficiency problem, meaning you're not producing enough water in your tears versus not producing enough lipids to retain the tears you are producing. "This was a big reversal of prior thinking," she adds. "The treatment protocols prior to that time were largely focused on managing the sequelae and symptoms of dry eye rather than on directly treating what caused the condition. Dry eye only happens when the ocular surface system can't adequately protect itself from desiccating stress. It could be context dependent (e.g., only when wearing a contact lens) or present in all environments. Regardless, it's incumbent on the eye doctor to figure out what components of the ocular surface system have become compromised so that treatment can target the problem(s). Decades of clinical evidence point to MGD as the prime suspect. That is a good place to start."

The glands' contribution to eye health is significant-meibum is made there and then delivered via tear ducts to the ocular surface where blinking helps lubricate the eyes and protect them from bacterial infections.

Without healthy meibum, patients experience burning, irritation and blurry vision among other symptoms.

She adds, "Although the mechanism isn't fully understood, hormonal changes that occur around and during menopause likely play a significant role in changing the amount of meibum production or the quality of the production. Medications (a key example is 13-cis-retinoic acid or Accutane) also can change the quality of the meibum by changing the types of lipids that are produced or reducing the vitality of the glands as a whole. A third contributor is likely the prevalent use of electronic devices in today's culture. Blinking patterns significantly change when reading from electronic displays when compared to printed text. When blinking decreases (in number or in force), the meibum may remain stagnant within the glands and eventually thicken."

This may be why doctors of optometry are seeing more MGD patients, and at a younger age.

Making a difference for patients

"Even with all the research in the world, the patient is in the chair, and the clock is ticking; you want to know what you need to do to make a difference," says Dr. Blackie, who now works in corporate optometry but spent 20 years working in clinical practice and producing several papers on the subject.

Based on her research, Dr. Blackie lists the must-knows for doctors of optometry:

Dr. Blackie is quick to note that the aforementioned are in reaction to symptoms reported by patients. Yet, Dr. Blackie and Dr. Korb have advocated for a more proactive approach to MGD-well care and prevention.

"We should be routinely evaluating gland dysfunction and structure on all patients to take control of ocular surface health," Dr. Blackie says.

Among the leading reasons why many first-time contact lens wearers drop out or stop wearing their contacts is discomfort due to dry eye disease.

In fact, nearly 40 years ago, in the study that first named MGD, patients with contact lens intolerance were the subjects of the research.

"Discomfort by contact lens wearers may be due to several issues, but dryness is a major factor," says Shalu Pal, O.D., who practices in Toronto, and is a member of the AOA Contact Lens & Cornea Section. "When MGD is present, the poor tear film leads to poor wettability of the contact lens surface, causing surface deposits to settle, blurry vision and discomfort.

On a daily basis, Dr. Pal sees mild to severe cases of MGD among her patients. Proactively identified and treated, dry eye—caused primarily by MGD—may decrease the chances of patients deciding to stop wearing contacts, she says.

"We are able to identify patients with MGD or who are at risk of developing it by using meibography," says Dr. Pal. "The key is to look for it on every patient."

Once a patient is diagnosed, treatment options vary.

"It ranges from warm compresses, digital massages, IPL (intense pulsed light), Meiboflow, cyclosporine, doxycycline to LipiFlow or some combination of the above," Dr. Pal says. "The level of treatment and frequency depends on the severity of the condition."

Seven years ago, Rebecca Wartman, O.D., a member of the AOA Coding and Reimbursement Committee and one of three "coding experts" appearing regularly in AOA Focus, wrote in Review of Optometry an article about how some diagnoses and procedures presented challenges to coding them correctly, namely MGD and other ocular surface diseases. At the time, there were no distinct CPT® (Current Procedural Terminology) codes for specific procedures; for instance, expressing glands.

Fast forward to 2018. The Centers for Disease Control and Prevention, National Center for Health Statistics, notified the AOA that it has approved its joint request—originally submitted November 2016 in conjunction with the American Academy of Ophthalmology—for creation of a new ICD-10 code for MGD (right eye, left eye, bilateral and unspecified eye).

The new code is scheduled to go into effect for fiscal year 2019 starting on Oct. 1, 2018. It will be posted in June and will enable doctors of optometry to code properly, appropriately and fully.

"Meibomian gland dysfunction is one of the more common eye diseases that patients face and has long been ignored or minimized," says Dr. Wartman. "Getting an ICD-10 code is a good thing and fills a hole in our diagnoses. In the past, we were forced to use blepharitis or to code more for the symptoms of dry eye syndrome or keratitis sicca, rather than the real disease of MGD. Having a code will aid in getting all insurance carriers to recognize and cover this disease."

Says fellow committee member and coding expert Harvey Richman, O.D.: "With technology improving for diagnosis and treatment of meibomian gland dysfunction and insurances reluctant to accept unspecified diagnosis for coverage, optometrists will be able to document to the highest level of specificity their findings."

An essential part of a comprehensive exam

July marks Dry Eye Awareness Month, sponsored by the National Alliance for Eye and Vision Research and TFOS. For all the progress and growing awareness around MGD, it's not easy to change old habits—waiting until a patient is symptomatic. A 2016 online survey of doctors of optometry showed that only 30% were routinely expressing the meibomian gland during comprehensive eye examinations.

"It hasn't quite completed the circle, but there's definitely an awareness now that MGD is one of the things I must address as a doctor of optometry," Dr. Blackie says. "I consider that a huge win. Because if you treat the MGD, you're doing a good thing for patients with dry eye disease."

Checking the margin of the eyelids and assessing the meibum coming from the glands—with a Meibomian Gland Evaluator—is now routinely done during Dr. Brujic's comprehensive eye examinations. He proactively presses along the eyelid margin with his thumb or prefers to use a small tool that allows him to apply enough pressure to determine if any meibum is actually being secreted by the meibomian glands.

Five years ago, Dr. Brujic says, doctors of optometry didn't have the tools to actively clean or remove biofilm from the eyelid (microblepharoexfoliation) to prevent a threat to vision.

"We know now that clean eyelid margins are a potential key in keeping these patients healthy," Dr. Brujic says.

Adds Dr. Nichols: "Today, more clinicians than ever before include the assessment of the Meibomian glands in a dry eye work-up."