June 15, 2020
Researchers found an association between myopia and prolonged smartphone use, begging the question: What does the future hold for millions of kids growing up in the digital age? 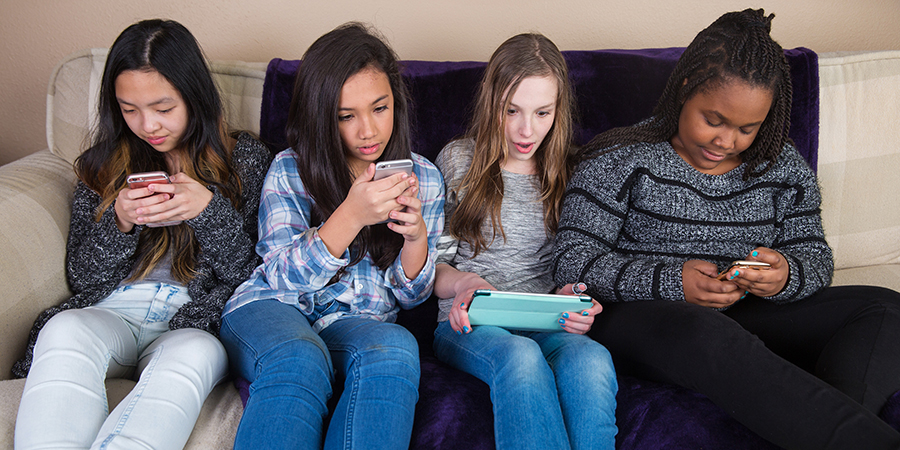 Myopic children use twice as much smartphone data each day as their non-myopic peers, a recent study found, leading researchers to ponder whether iGen's unparalleled connectivity from such a young age exacerbates myopia risk.

"Based on the results from both studies, the risk for myopia development and progression may be higher in this pandemic situation."

Although more than 9 in 10 (93%) millennials own smartphones, leading all other American generations in adoption and use of technology, the generation now spanning ages 24 to 39 doesn't hold the distinction of "digital natives." That title belongs to Gen Z, those born after 1996, who have no memory of a world before smartphones. In fact, 95% of American teens own or have access to a smartphone and nearly half say they're online on a near-constant basis.

As digital device use has skyrocketed in recent years, so, too, has myopia prevalence and age of onset. In just four decades, U.S. myopia prevalence has gone from 25% of Americans to about 42%, while a 2018 study of 60,800 children in southern California found 59% of 17- to 19-year-olds were myopic. And, if that wasn't dramatic enough, myopia prevalence globally could reach 52% in the next three decades. Hence, the impetus behind this international study originating from the University of Dublin.

Per the study, researchers posed a questionnaire on smartphone usage to 418 Irish students enrolled in primary (K-6), secondary (7-12) and tertiary (university) level schooling, then compared their refractive status. Students' smartphone data usage was recorded over an extended period, as were the top three applications consuming most data and a self-report of estimated time spent per day on the phone.

Students used an average of 873 ± 1,038 MB (mean ± standard deviation) of data daily and about four hours of time spent on the phone each day, mostly spent using social media apps (Snapchat, Instagram and Facebook). Researchers found that myopes not only used more data (1,131 ± 1,748 MB data/daily compared to 614 ± 902 MB data/daily) and spent longer on their phones than non-myopes but also were more likely to believe screen use could affect their eyes.

Interestingly, 84% of myopes believed digital technology could adversely affect their eyes as compared to 68% of non-myopes with both groups citing dry eyes (67%) and eyestrain (29%). A similar number of myopes and non-myopes believed digital screen use could cause myopia (31% and 25%, respectively).
"The lifestyle habits of children and teenagers today have undeniably changed with advancements in technology and while the prevalence of myopia has been increasing for decades, the increased level of near visual stimulation from smartphones may pose an additional independent risk for myopia," the authors note.

"Smartphones differ from traditional reading in various aspects such as wave-length, distance from the eye, size, contrast, resolution, temporal properties and spectral composition, all of which merit investigation. Aside from this, children and adolescents now spend more (time) than ever using a smartphone that demands proximal attention, which may compete with other more protective activities such as time outdoors."

Yi Pang, M.D., O.D., Ph.D., associate dean for research at Illinois College of Optometry, says there is a trend that more children are spending more time on digital devices, and research has shown that longer time on near work and/or shorter working distance can increase myopia progression. This should be a red flag as schoolchildren only recently concluded months of distance learning on handheld devices or computers due to pandemic lockdowns.

"With the COVID-19 pandemic, the time on electronic devices dramatically increased in children because of remote learning and fewer opportunities for kids to do other activities," Dr. Pang says. "Based on the results from both studies, the risk for myopia development and progression may be higher in this pandemic situation."
However, Dr. Pang notes, both studies only found an association with myopia and not a causation, which should be grounds for future studies.
Dr. Pang adds: "Eye care practitioners should be aware of this issue and be ready to address parents' and patients' concerns."