September 8, 2021
When doctors of optometry look at their patients as athletes—from everyday active individuals to Olympians—they can help them perform better in sports and in all aspects of life. AOA members can access a number of resources to reach out to their community about concussion care. 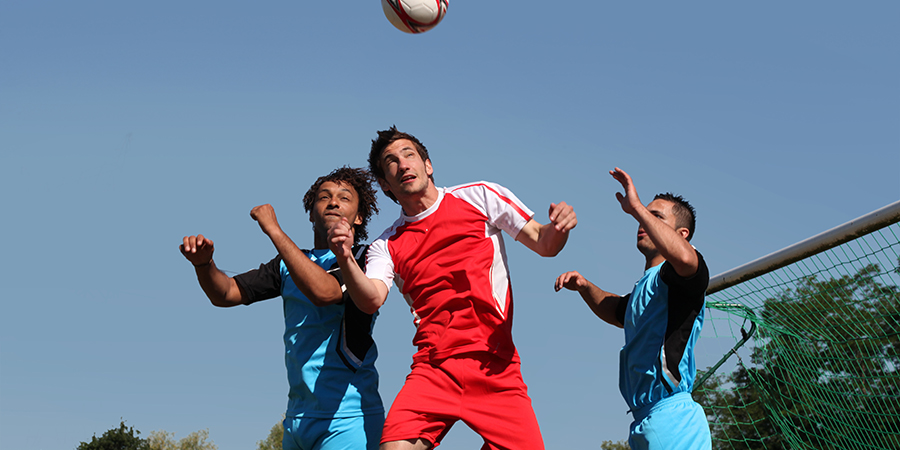 Excerpted from page 30 of the July/August 2021 edition of AOA Focus.

Even as professional surfer Caroline Marks trained for the Summer Olympics in Tokyo, Japan, this year, the 19-year-old made time for a comprehensive eye exam at the California optometry practice of Randy Griffin, O.D.

Marks, who at 15 was the youngest surfer ever to qualify for the World Surf League’s Women’s Championship Tour, visited Dr. Griffin’s practice in the seaside city of San Clemente early this year as she prepared for several months of competitions ahead of the July Olympic games.

“As a professional surfer, taking care of my body and health is so important to me, and a big part of that is ensuring my eyes are healthy,” Marks says. “I have a family history of eye problems and spend a lot of time in the sun, so from a very young age my parents instilled the importance of taking care of my eyes and vision.”

Surfers such as Marks need to keep close tabs on their eye health, Dr. Griffin says, and not just because their sport requires top-notch distance vision and binocularity. Like other athletes who spend long hours in the sun, surfers are at risk of developing pterygium—also known as Surfer’s Eye—a condition in which a layer of tissue can extend over the cornea or the “front window” of the eye. During an annual, comprehensive eye exam, a doctor of optometry can check for the buildup that causes the irritating condition, which, if it exacerbates, can eventually compromise vision.

“Monitoring the growth of pterygium, and trying to prevent that from becoming any more significant, is important,” Dr. Griffin says. “It’s just these kinds of issues that can be ignored by not making an in-person appointment with your optometrist.”

Marks and Dr. Griffin are headlining Eye Deserve More, the AOA’s 2021 public awareness campaign highlighting the critical role doctors of optometry play in the eye care and overall health of Americans. The message behind Eye Deserve More is that to ensure eye health and general well-being, all Americans—not just athletes and Olympians—deserve comprehensive care from an AOA doctor of optometry. As more Americans are turning to the internet and with the increase of online and app-based vision services, the campaign is reinforcing that there is no substitute for in-person care.

“Good vision is obviously important to what I do as a surfer, but my overall health is super important to me—from cooking and eating well to exercising and seeing medical professionals when needed,” Marks says.

Athletes are already in your exam chair

Dr. Griffin, who surfed as a teen and now enjoys golfing and fly fishing, treats several professional surfers, as well as many recreational athletes focused on water sports. He says AOA doctors of optometry can help athletes regardless of their age or ability by providing comprehensive eye care to everyone from professionals to weekend warriors.

“Whether the patient is an 80-year-old golfer or 10-year-old Little Leaguer,” Dr. Griffin says, “I would like to think that I have an influence on how well they compete in their desired sport.”

While Dr. Griffin attributes much of his patient-athlete population to word-of-mouth recommendations and his location in a sporty, coastal city, there are ways for doctors to specifically target athletes. Joshua Watt, O.D., chair of the AOA’s Sports and Performance Vision Committee (SPVC), owns Impact Vision Therapy, a referral-based, specialty practice with two locations in Colorado. Dr. Watt specializes in vision therapy, and a large portion of his patient base consists of athletes hoping to improve their performance in sports. He says a doctor who wants to expand the sports-focused side of their practice should start with the athlete already in their exam chair.

“You have triathletes. You have runners and cyclists. You have golfers and tennis players. Pickleball is huge now,” Dr. Watt says. “They are all interested in enhancing their performance and getting better.”

Ask your patient-athletes about how they perform in the sports they play, Dr. Watt says. “What would they like to do better? Where do they struggle? What are some of the weaknesses?” he says. “Then see if you can make a connection between that weakness and what you’re seeing in their annual exam.”

When an athlete continues to struggle with the same skill, despite hours of training, Dr. Watt says a vision problem is sometimes the culprit. Perhaps a baseball player who is constantly behind the pitch has a depth perception issue that can be spotted during a comprehensive eye exam. Maybe there’s a visual explanation behind a tennis champ’s unforced errors. When the wide receiver on the high school football team keeps dropping the ball, is that a problem with the hands—or the eyes?

By demonstrating how vision relates to an athlete’s sport, Dr. Watt says, doctors can help enhance the performance of all athletes, even those who don’t face particular sports struggles. A doctor could, for instance, offer dry-eye solutions to runners and cyclists, eye burn prevention tips to beach volleyball players and eye safety information to basketball and racquetball players. Sports-specific glasses, Dr. Watt says, could help ease the glare for a baseball player who is batting under the lights at night.

“Being able to showcase your knowledge, interest and desire to help them is a very easy entry point to that segment of the population,” Dr. Watt says. “They know the sport, but they don’t know the eyes. You can showcase yourself as that expert.”

Provide care before and after concussions

Many of Dr. Watt’s patient-athletes found themselves in his office following head injuries, so he’s working with the SPVC to help spread the word about how doctors can help with concussions before and after they happen. While athletes playing football, hockey, rugby, soccer and basketball are at highest risk for concussions, brain injuries can happen during any sport—or even on the playground. So athletes, especially in contact sports, should have their baseline visual skills, as well as balance and brain function, assessed as part of concussion protocol, Dr. Watt says. That’s because it’s common for the visual system to be impacted by a concussion.

“If they’re [later] involved in a potentially concussive event, one of the best ways we can tell if they had a concussion is to remeasure those [baseline] skills,” Dr. Watt says. “If you don’t have a baseline, it’s going to be really challenging to know if this was a problem before the concussion or a problem since the concussion.”

The SPVC has developed a toolkit for AOA members who want to reach out to their local athletic directors, head coaches, recreational leagues, club teams, gyms and fitness facilities, and personal trainers to inform them of how doctors of optometry care for concussions. Among the resources are an AOA Health Policy Institute brief on efforts of doctors of optometry to minimize and prevent traumatic brain injuries; a sideline concussion checklist for athletic coaches; and a draft letter doctors can personalize and send to community athletic leaders. The letter notes that comparing pre- and post-head injury tests can help determine when it’s safe for an athlete to return to school and sports following a concussion.

AOA members also can access a chairside concussion care fact sheet, a sports vision screening form and a fact sheet on eye exams for athletes with special needs. More resources are available, including a concussion fact sheet and the Brain Injury Electronic Resource Manual, Volume 1A and 1B. Previous webinars and educational courses from Optometry’s Meeting® related to optometry and concussions also are available on the EyeLearn Professional Development Hub.

This fall, the SPVC will host the AOA’s first residency forum for neuro-optometry, pediatric, vision therapy and vision rehabilitation, and brain injury residents. The two-day virtual event is meant to promote passion and engagement in these fields, says Dr. Watt.

“What we find, unfortunately, is that a lot of these residents will ... finish the residency and not pursue that specialty anymore,” says Dr. Watt.

The forum will give residents resources and connections to help them explore their specialty beyond the end of residency, Dr. Watt says. The forum will cover topics including how to handle tough cases and difficult topics with patients, how to network after your residency has ended, how to incorporate your specialty into your optometric practice, and how to showcase your value to practice groups you might join. Stay tuned to aoa.org/news for dates and registration info regarding the virtual residency forum.

Another way for doctors of optometry to reach children’s sports organizations is to invite parents, coaches and others into the office—or join them at a school or sports venue—to learn more about how vision can improve sports performance, Dr. Watt says. When he invited coaches to his office, Dr. Watt put out a flyer to athletic directors and coaches in the area, inviting them for a meet-and-greet to see his practice in action.

While the turnout was small, the event did bring new patients into the practice. It’s important to remember that courting local athletes is an ongoing process, Dr. Watt says, because of the high turnover in sports. Optometrists also can highlight for parents how vision is connected to academic success, not just athletic performance. Dr. Watt says he recently treated a competitive baseball player who had been working with a performance hitting coach. The player had all the mechanics but kept missing the ball, so the coach recommended an eye exam. Dr. Watt found a vision issue that not only caused batting trouble, but also impacted the student’s reading ability.

“On the youth side, the benefits go beyond just the sports,” Dr. Watt says. “A lot of these kids are going to play high school sports, maybe college, and that’s about it. But they’re going to have to read and work on the computer for the rest of their life. So you have that longer-lasting effect than just the sports aspect.”

The bottom line, Dr. Watt says, is to look at all of your patients as athletes. How can you as a doctor of optometry help them perform better not only in sports, but in life?

“We could be looking at all of these issues—not just in athletes, but in every patient we see,” he says. “If you’re living and you’re moving, you’re an athlete. The 94-year-old who goes on a mile walk is as much of an athlete to me as the 24-year-old linebacker.”