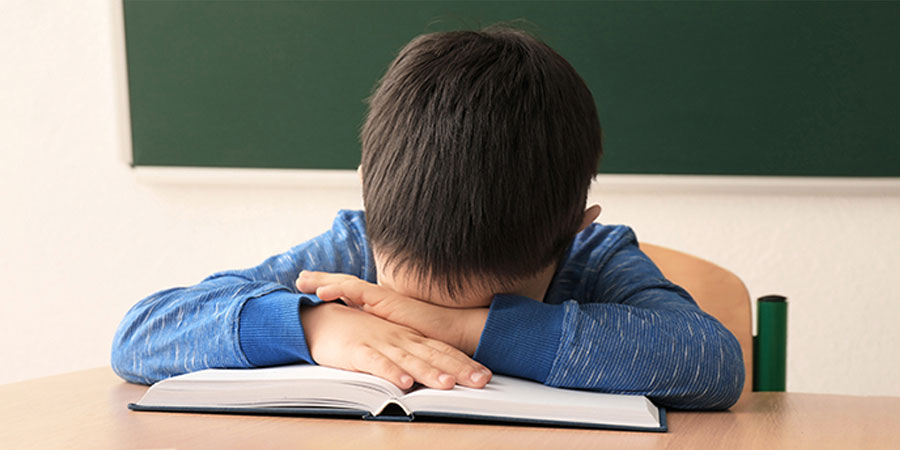 There's more to it than simply not being able to see the board; poor vision in the classroom can hurt kids' development and scholastic performance, but the solution can be right in front of their eyes.

One in five preschoolers in the United States have vision problems, and by the time they enter school, one in four will need or wear corrective lenses. So much development occurs during the first six years of a child's life—a critical development period when children are most susceptible to vision changes—that unaddressed vision problems can hold children back, taking a toll on academic achievement, studies say.

With each level of educational attainment, children face increasing demands on their vision, from board work and computer usage to an ever-increasing reliance on reading skills. Should poor vision hinder learning, the classroom can become a stressful and frustrating place. Often, children can't express why.

"The biggest issue is that kids don't say anything," says Michael Earley, O.D., Ph.D., associate dean of academic affairs at The Ohio State University. "Kids don't know what their vision is supposed to look like. They don't volunteer these things or complain, which is why we have to do a comprehensive eye exam. A lot of parents think if there's something wrong with their eyes, the child will say something or a pediatrician will catch it, but that's just not the case."

In fact, the subpar vision screenings that schools often employ can miss up to 75% of children with vision problems, and of those students identified to have an eye problem through screenings, 61% never follow up with an eye doctor.

The evidence is in

Published in the journal Optometry and Vision Science, one study found that among 90 kindergartners and 91 first graders from a middle-class, suburban school in Cleveland, Ohio, visual performance was significantly related to reading performance. The study determined that accommodative facility was predictive of successful reading performance in 7-year-olds and first graders—a relation that became more significant with age—because "tasks involving rapid and repeated changes in accommodation are not common in kindergarten, and print size decreases with age." It went on to conclude that "good visual and visual perceptual skills are significantly associated with whether a child will show successful or reduced reading performance."

Another study, published in the journal Optometry, found that some visual factors were found to be significantly better predictors of academic success, as measured on the Iowa Test of Basic Skills (ITBS), than either race or socio-economic status. The latter two are traditionally correlated with classroom performance, while visual motor activities were found to be an even better predictor of ITBS scores.

"Thus, the study's findings that nonproficient readers have significantly more visual deficits than proficient readers seems to have implications with respect to general academic functioning, a most important occupational component of the school-age child's daily life," the study states.

Failure to address significant eye and vision conditions early may have long-term consequences not only on eye health, but also on educational attainment, professional opportunities and quality of life. However, adhering to the AOA's recommended schedule for comprehensive pediatric eye and vision examinations can proactively protect children's eye health.

"As doctors of optometry, we don't just look at eye health, we also evaluate the whole visual system of the patient, including learning-related vision problems," says Ida Chung, O.D., assistant dean of learning at Western University of Health Sciences College of Optometry, and a multidisciplinary stakeholder on the guideline development group for Pediatric Eye and Vision Examination.

Dr. Chung says it's incumbent on doctors of optometry to offer parents and educators guidance on the importance of an in-person, comprehensive eye exam to guide vision development. So, too, doctors of optometry can review the Pediatric Eye and Vision Examination guideline for evidence-based recommendations for pediatric care. The guideline helps doctors:

Read more about the evidence-based guideline development process, and learn more about becoming an InfantSEE® provider.