October 24, 2019
Secondhand smoke exposure can cause a myriad of health problems. Now, new research suggests it may be associated with choroidal thinning in children as young as 6. 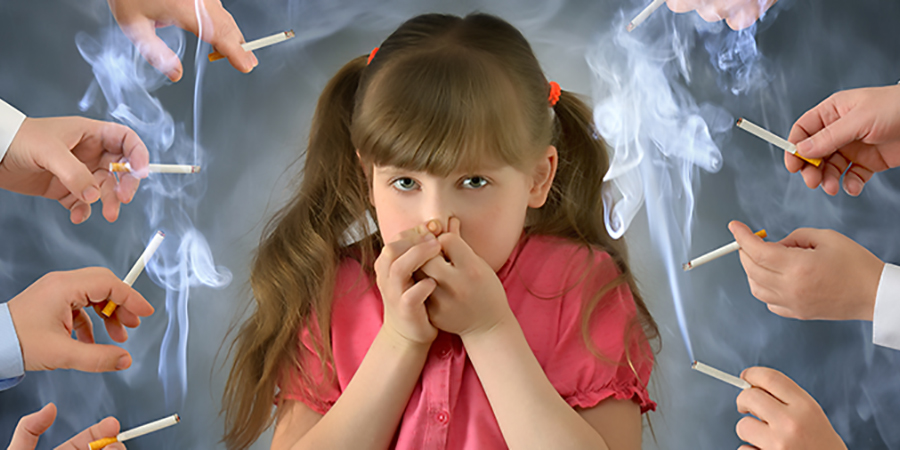 Secondhand smoke may cause choroidal thinning in children as young as 6, claims a new study that details another ocular health consequence associated with America's leading cause of preventable disease.

Published online in JAMA Ophthalmology, a cross-sectional study of young children in Hong Kong found choroidal thinning was associated with not only the number of smokers but also the quantity of smoking among family members. Such findings add to the relatively limited knowledge of pediatric ocular health consequences of secondhand smoke exposure as opposed to the well-documented associations of smoking's effects on adult ocular health.

No amount of secondhand smoke exposure is safe, concluded the 2006 Surgeon General's report, but its ill effects are pronounced among high-risk populations, including pregnant women, older people and children. A known cause of sudden infant death syndrome (SIDS), secondhand smoke in children exacerbates lung problems, ear infections and severe asthma while also elevating risk for heart disease and lung cancer.

Although evidence shows smoking's role in precipitating both age-related macular degeneration (AMD) and cataracts, as well as affecting glaucoma, diabetic retinopathy and dry eye in adults, much less is known about the effects of smoke exposure on children's eyes. That's where researchers hope this newest evidence may provide some insight.

Recruiting 1,400 children, ages 6 to 8, from the Hong Kong Children Eye Study, researchers used swept-source optical coherence tomography to measure choroidal thickness among children exposed to secondhand smoke at home and those with no exposure.

Among the exposure group, researchers found choroidal thickness 6 to 8 micrometers thinner than those of the non-exposure group. Moreover, choroidal thickness was negatively correlated with the number of family smokers, such that for every one increase in family smoker, children's choroids thinned by 4 to 7 micrometers, generally. So, too, for every increase of exposure to one secondhand smoker per day, choroids were reduced as much as 0.5 micrometers.

Although these observations were slight, researchers note that choroidal thinning leads to ophthalmic diseases, such as macular holes and AMD. Also, this begs the question of whether long-term exposure from secondhand smoke could lead to progressive choroidal thinning from childhood.

Despite the findings, researchers caution it only suggests an association as opposed to causation and other confounding factors may be present. Still, Dan Bintz, O.D., AOA Health Promotions Committee member, says the research certainly opens a new field of study.

"If you pair this with past research on macular degeneration, we really need to focus on children for a disease that manifests much later in life," Dr. Bintz writes. "As I tell my patients, the still mostly unknown-amongst the public-link between tobacco use and macular degeneration just gives you one more reason to quit, if you need one."

"The dangers of secondhand smoke are so dramatic in children that whether this study and future studies find damage to children's retinas, they should never be exposed to secondhand smoke," Dr. Bintz says.

"I would hate to be the parent who caused their children to be sick, which just goes to show the strength of nicotine addiction."

Although cigarette use among Americans continues a decades-long downward trend, many health authorities worry e-cigarette use among today's youth could stifle or reverse that overall trend. In fact, the 2018 National Youth Tobacco Survey showed a 78% increase in high schoolers using e-cigarettes (vaping) between 2017 and 2018, as well as a 67.8% increase in high schoolers' use of flavored e-cigarettes. This, combined with a concerning multi-state outbreak of severe pulmonary disease associated with suspected black-market vaping products, drove federal intervention in the form of a looming all-out ban on flavored e-cigarettes.

Still, the Food and Drug Administration (FDA) publicly worries that adolescent nicotine exposure via vaping may lead to a lifetime of addiction, as well as putting youth at increased risk for trying combustible cigarettes.

"While completely switching from combustible cigarettes to e-cigarettes may potentially benefit addicted adult smokers' health, no tobacco product-including e-cigarettes-is safe for youth to use," the FDA notes.

The AOA strongly supports the inclusion of vision loss and patient education in these proposed GWLs, and noted in the FDA's public comment period that doctors of optometry have long committed to educating patients about the dangers tobacco use poses to eye health.

"We applaud FDA's efforts to reduce the number of people who are visually impaired due to their lack of education surrounding the less-known adverse effects of smoking," reads the letter signed by AOA President Barbara L. Horn, O.D. "AOA and its members stand ready to support this rule in any way we can and will remain actively involved in ensuring patient education and understanding of these important issues."

As primary eye care providers, doctors of optometry have an opportunity to educate their patients and direct them toward smoking cessation resources. In fact, the AOA's evidence-based clinical practice guideline, Comprehensive Adult Eye and Vision Examination, generally recommends counseling patients on smoking cessation and education and suggests doctors be alert for new information.

"Eye doctors should ask about and document their patients' smoking status and inform them about the benefits to their eyes, vision and overall health, through smoking cessation," the guideline reads.

"Counseling and educating patients about the potential impact of smoking may help maintain ocular and systemic health, and visual function."