February 3, 2021
Scratchy, irritated eyes may be the least of concerns from poor air quality as a new study associates ambient air pollution with greater AMD risk and differences in retinal layer thickness. 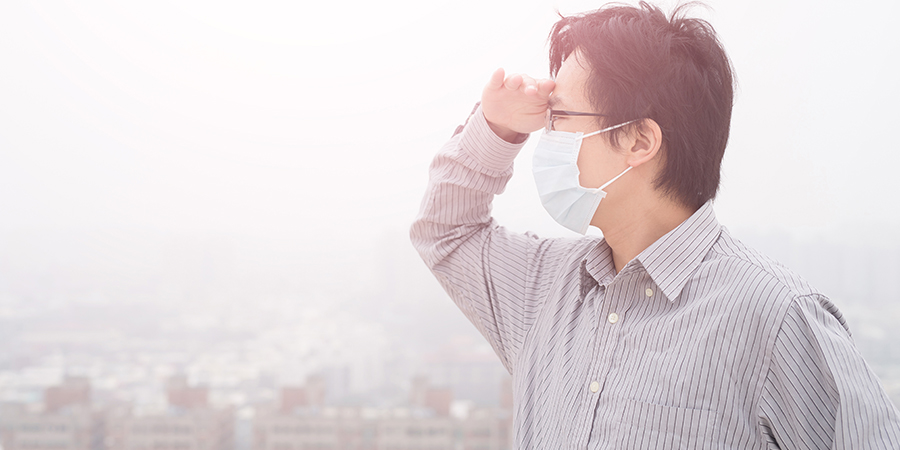 Published in the British Journal of Ophthalmology, the study found that people exposed to higher levels of fine particulate matter (<2.5µm, or PM2.5) were at least 8% more likely to self-report AMD, while exposure to higher levels of ambient air pollution also was  associated with differences in retinal layer thickness. Evidence of such an association could have vast ramifications, especially in the U.S., where nearly half of all Americans—and climbing—are exposed to unhealthy ozone or particle pollution and over 21 million live in areas with routinely unhealthy levels of year-round particle pollution.

A leading cause of severe vision loss among U.S. adults over age 50, AMD is essentially the loss of central vision from changes in the macula. In addition to age, risk factors for AMD development may include a family history of the disease, obesity, smoking and high blood pressure. Up until now, air pollution wasn’t typically considered among that list yet researchers from the University College London present evidence in this study that may prompt a rethink of this irreversible eye disease.

Per a cross-sectional study of nearly 52,600 participants, 40 to 69 years old, in the long-term U.K. Biobank study, researchers examined the associations of pollutant levels estimated near the participants’ residence with self-reported AMD, as well as both photoreceptor sublayers and retinal pigment epithelium (RPE) layer thickness.

“It is possible that the structural features observed may be unrelated to AMD but associated with pollution-induced retinal toxicity,” the authors note. “However, the direction of the relationships between air pollution and both AMD and associated retinal layer thicknesses indicate higher exposure to air pollution may make the cells more vulnerable and increase the risk of AMD.”

A mixture of solid particles—carbon, dust or smoke—PM2.5 can come from construction sites, industrial exhaust or fires. When inhaled, PM2.5 can be absorbed into the bloodstream and cause severe respiratory diseases, inflammation and mortality. Likewise, nitrogen oxides are not only air pollutants on their own but also react in the atmosphere to form hazardous ozone, O3. The latter causes acute and chronic breathing problems and increased risk of premature death.

Such is the case, the U.S. Environmental Protection Agency and others have worked for decades to reduce harmful emissions, and while air quality also is affected by natural factors, those efforts may have started to plateau. While air quality improvements between 1990 and 2021 may have avoided over 40,000 U.S. deaths, the past several years have exhibited more pollution days than years’ prior. In fact, though PM2.5 pollution decreased 24% nationwide, 2009-2016, it increased 5% from 2016 to 2018.

What’s more, an unprecedented wildfire season in 2020 incredibly topped out air quality index scales for days on end with multiple Western U.S. cities exhibiting the worst air quality worldwide, forcing widespread closures and evacuations. The American Lung Association, which maintains the annual State of the Air Report, notes that its 2020 data showed “record-breaking spikes in particle pollution due to wildfires” and that its most recent figures reflect three of the hottest years in recorded global history.

While COVID-19 pandemic shutdowns did improve air quality to some extent, the lung association noted that data shows many Americans still breathe unhealthy air. Per the American Lung Association 2020 State of the Air Report, these U.S. counties round out the worst in the nation for year-round unhealthy levels of particle pollution:

In the April/May 2019 issue of AOA Focus, Maria Pribis, O.D., described an unfortunate case where a longtime dry-eye patient pleaded for help when air pollution triggered a severe dry-eye episode. The catch? The patient was in the middle of a three-week business trip—in China. At the time, Beijing issued a “red alert” for air pollution levels 40 times the safe limit recommended by the World Health Organization.

“He basically lost all of his vision and went to the hospital where his diagnosis was a severe dry-eye episode,” Dr. Pribis recounts. “His cornea had four-plus corneal staining and he couldn’t see at all. He was obviously terrified; the hospital was extremely worried.”

The scenario got Dr. Pribis wondering about the effects of air pollution in her own community of New York City. Sure enough, anecdotally, she noticed dry eye patients who traveled out of the city would have symptoms clear up, only to flare upon their return. She’s even taken to advising such patients to be alert to poor air-quality days.

“I think of air pollution as a new risk factor for dry eye, so one of the many things that may make our eyes dry,” Dr. Pribis told AOA Focus. “I’m putting air pollution on my list.”

Interested in learning more about AMD and how lifestyle modifications might reduce onset or progression? Consider an upcoming continuing education course available at this year’s Optometry’s Meeting, June 24-26, in Anaheim, Calif. Here’s what you need to know:

What: Nutritional and Lifestyle Modifications to Reduce Risk of AMD Onset and Progression
When: Thursday, June 24 (date/time subject to change)

Ready to register for Optometry's Meeting? Enter the registration portal to begin.