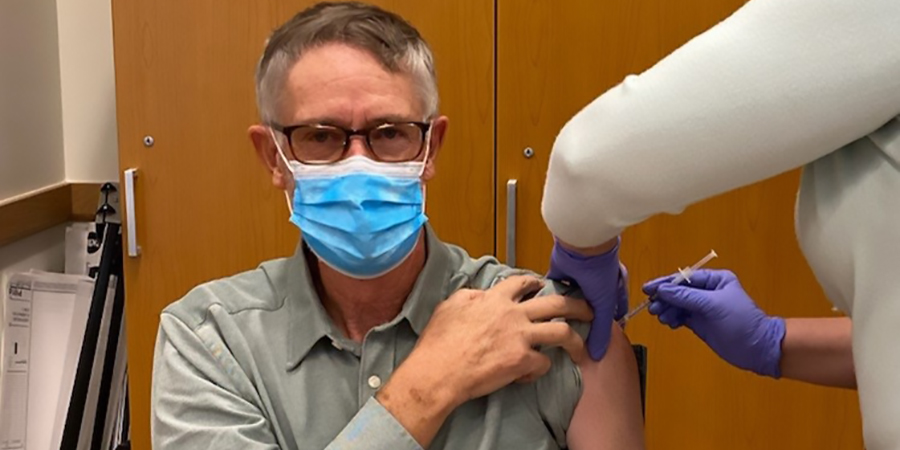 One month into a critical U.S. coronavirus vaccination campaign still finding its stride, optometry continues doing its part in the fight against COVID-19—looking to roll up not only their own sleeves but those of patients as federal authorities urge accelerating states’ vaccination plans.

On Jan. 12, Department of Health and Human Services (HHS) Secretary Alex Azar announced several urgent changes to increase vaccine supply, extend vaccination eligibility to more Americans and open additional locations for administering shots, as the nation averages nearly a quarter-million new COVID-19 cases each day. The changes, intended to hasten vaccine uptake and assist states’ response to the pandemic virus, come as more than 14.7 million Americans (over 4% of the population) reportedly have received at least one dose of vaccine. Still, that number falls well short of the 70-85% of Americans necessary for the so-called “herd immunity” threshold.

To reach that mark, HHS released reserve doses and recommends states proceed to the next phase of immunization, namely, those 65 and older or younger people with underlying health conditions. Additionally, HHS newly approved tens of thousands of pharmacies, mass vaccination sites and nearly 13,000 federally qualified health centers to administer the two-dose inoculations. What’s more, Sec. Azar indicated that states with inefficient records of vaccine administration might receive fewer doses in the future, especially given that only about a third of distributed doses had been administered.

“We have too much vaccine sitting in freezers at hospitals with hospitals not using it,” Sec. Azar said during the Jan. 12 news conference, adding that some states have been “overly prescriptive” in who gets vaccinated and when.

While the CDC’s Advisory Committee on Immunization Practices in December recommended a phased approach to vaccinations that included health care personnel, defined as “paid and unpaid persons serving in health care settings who have the potential for direct or indirect exposure to patients or infectious materials,” ultimately, it is up to states to determine their own rollout plans.

Added Sec. Azar: “We would rather have some lower-priority individuals get vaccinated along with high-priority individuals if it makes us go fast and if it avoids vaccines sitting on the shelves and, for the love of God, not having vaccines actually wasted or thrown away because of a failure to administer.”

Doctors of optometry get COVID-19 vaccine

In September, the CDC notified all 50 states and public health officials to expect a COVID-19 vaccine before the new year and that administrations should begin to lay out plans for deployment. At the time, the AOA and affiliates began working with state authorities to ensure doctors of optometry were fully recognized for their frontline, primary eye health care provider role and consequently included among the Phase 1a distribution.

Optometry’s case? Despite dramatically reduced patient visits due to federal and state COVID-19 lockdowns in the spring of 2020, doctors of optometry still provided urgent and emergent care to more than 206,000 individuals in a single month. Significantly, most of those patients would have otherwise sought care at an emergency department or urgent care center when such facilities were taxed with COVID-19 cases. For these efforts, state administrations generally agreed to include optometry among the initial distribution phases.

In fact, more than 30 states specifically noted doctors of optometry among priority phases while others report doctors able to receive the vaccine or schedule appointments. In New York, the state’s rollout plans included doctors of optometry among its Phase 1a distribution with vaccines available for doctors and their staff starting Jan. 4. Lined up and ready, Andrea Thau, O.D., AOA past president, not only received her vaccine as soon as possible but also actively encouraged staff and patients to take their turn.

“As soon as the word was out that we were eligible to be vaccinated, I texted all of the doctors and staff in the office to tell them that I had signed up to be vaccinated and shared the link to sign up,” Dr. Thau says. She sent out emails to let patients know that all the doctors in the practice had been vaccinated and leveraged her LinkedIn following to generate several thousand views. In the post, she wrote:

“As a doctor of optometry, my colleagues and I have been delivering frontline, essential eyecare during the pandemic. Thanks to the #AmericanOptometricAssociation, #nysoa, #oscony for ensuring our access and sharing how to register to be vaccinated.”

In southern California, a veritable hotbed of COVID-19 cases in recent weeks, Alexander Bennett, AOSA president and student at Western University of Health Sciences College of Optometry, saw the region’s hospitals nearing capacity and decided he would try to get a vaccine at first availability. Such is the case for many optometry students he has heard from in recent weeks.

“I believe the majority of my class has sought out their first dose of vaccine as it became available to doctors of optometry and optometry students involved in direct patient care—which includes all years of students,” Bennett says.

“I’m so grateful for the hard work of the AOA and state affiliates who helped develop the plan to get doctors of optometry immunized. It is crucial that all doctors of optometry take advantage of the vaccine as soon as they are able to continue providing for their patients and support the associations who are granting them early access to this important medicine.”

Doctors of optometry as COVID-19 vaccinators

Concurrent to these efforts to ensure optometry’s inclusion in priority vaccinations, the AOA and affiliates are working toward the other critical component to the U.S. vaccination campaign—bolstering available vaccinators. There again, optometry has a strong case for inclusion.

Overall, more than 90% of the Medicare beneficiary population—especially at-risk for COVID-19 complications—live within 15 minutes of a doctor of optometry, and at least 19 states already authorize optometry to administer injections. In another 22 states, doctors of optometry are authorized to provide anaphylaxis through injection, noted AOA President William T. Reynolds, O.D., in a letter to HHS. Given Sec. Azar’s urgent imperative to increase vaccination uptake, as well as the HHS’ own guidance recommending states consider expanding provider types eligible to administer immunizations, optometry’s authorization to provide the vaccine could make a significant difference.

“Providing doctors of optometry administration authority for the COVID-19 vaccine would mean bringing quick and easy access to the vaccine to 99% of the population and 90% of our country’s most vulnerable patients,” Dr. Reynolds noted.

Diligently, several affiliates have called on their states’ administrations to underscore optometry’s utility, especially in those localities where doctors of optometry are permitted to administer vaccines in the event of a declared public health emergency, such as Kentucky or Ohio.

In California, it is a question not only of getting doctors of optometry vaccinated but also approving doctors of optometry as vaccinators. While doctors of optometry are considered Phase 1a vaccine candidates yet Tier 3 alongside dentists, it’s largely up to county-based distribution systems with some localities ahead of others, notes Kristine Schultz, California Optometric Association (COA) interim executive director. With the intended changes from HHS fresh on their minds, California’s health secretary announced new guidelines as soon as Jan. 13 that would include seniors.

“There is a huge sense of urgency,” Schultz said on Jan. 13. “California’s rollout has been among the slowest in the nation, according to the tracker maintained by the CDC. Gov. Gavin Newsom announced an ambitious plan to vaccinate one million people across the state by the end of the week.”

To facilitate that ambitious push, the COA is seeking not only a legal waiver through the governor’s administration that would allow doctors of optometry to perform COVID-19 immunizations and point-of-care testing but also legislation to ensure this by statute. While AB-443—permitting optometry to provide certain immunizations—still awaits regulatory implementation three years after passage, the legislation that COA currently seeks would immediately permit immunization-certified doctors to provide those vaccines.

In New Jersey, doctors are leaning into their scope of practice act that already permits anaphylaxis injections as a starting point for gaining COVID-19 immunization authority. Considering the state’s administration has discussed expanding the scope of “non-traditional providers” to assist in the unparalleled vaccination effort, the New Jersey Society of Optometric Physicians (NJSOP) worked to introduce legislation in the state assembly that would gain optometry’s authorization for COVID-19 and influenza vaccinations.

Michael Veliky, O.D., NJSOP legislative chair, says it’s important to note that such legislation comes at an obvious time of crisis, yet it’s clear that optometry can be better positioned to help in this current and future public health responses. To that end, legislators agree on the merits of optometry’s argument for immunization authority.

“There are 1,200+ doctors of optometry who are well-dispersed throughout the state, the rural, suburban and urban areas—definitely those higher-density areas that are traditionally underserved—and we have access to these high-risk patients already,” Dr. Veliky says. “The patients who are at higher risk from COVID-19 are the same patients we see for their medical conditions; we see them because they’re diabetic or hypertensive, or whatever the case may be. They’re in our office already and if we really want to get to the herd immunity numbers we need—70% of our population—then this needs to be done outside of just a clinic setting. We need more ‘nontraditional’ routes than just the pharmacies and vaccination centers being set up.

“Patients don’t necessarily want to go to a hospital for their vaccine or a mass-vaccination center for their vaccine, but if they’re in their doctor’s office already for their three-month glaucoma pressure check and we can administer the vaccine to them then, that only helps our numbers and makes it more convenient for the patient, as well.”

The U.S. COVID-19 vaccination campaign will necessitate a concerted effort on the part of every available health care provider if a goal of 1.8 million vaccinations a day, seven days a week, to achieve widespread immunity by mid-2021 is possible. Toward that end, the AOA is committed to preparing doctors of optometry to assist in vaccination efforts when and where their communities allow.

In an upcoming #AskAOA webinar, AOA volunteers will provide an update on state efforts to vaccinate doctors of optometry, as well as focus on the scope implications of gaining vaccination authority. Additionally, pharmacist Jason Wong, PharmD, will describe the current training related to vaccinations for pharmacists and provide a basic overview of requirements for those who provide immunization services, including safe administration of subcutaneous injections, legal and regulatory compliance standards, and where to seek the latest vaccine information.

For the latest information on the federal COVID-19 public health emergency or to access AOA resources or guidance, including the #AskAOA webinar series, visit the AOA’s COVID-19 Crisis Response page.

In an upcoming #AskAOA webinar, get an update on state vaccination efforts and scope implications. Jason Wong, PharmD, will describe the current training related to vaccinations for pharmacists, requirements for those who provide immunization services and where to seek the latest vaccine information.