January 28, 2019
New research claims mindfulness meditation could be a useful, complimentary therapy for lowering IOP in patients with POAG, and questions the role of stress as a causal factor in glaucoma. 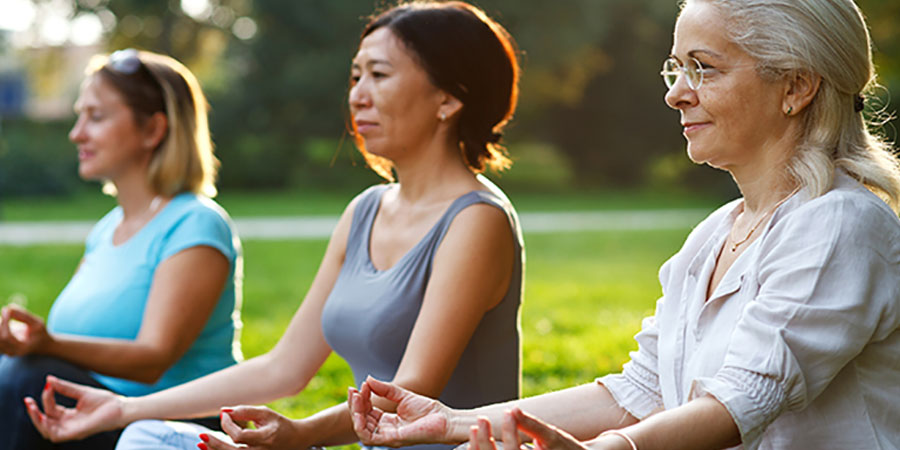 First beatniks. Then Wall Street. Next—eye care? In Western culture, meditation's transcendence from a means of enlightenment to a tool for stress reduction could evolve once more as an adjunctive clinical therapy.

Published in the Journal of Glaucoma, a new study describes how only a short course of mindfulness-based stress reduction by meditation reduced intraocular pressure (IOP), normalized stress biomarkers and positively modified gene expression in patients with primary-open angle glaucoma (POAG). Such findings beg further study but provide tantalizing insight about a therapeutic option that may accompany tried-and-true pharmaceuticals, as well as hint at the role stress may play in glaucoma.

The second-leading cause of blindness in the United States, glaucoma is a group of eye disorders that lead to progressive optic nerve damage. In the most common form, POAG, IOP is elevated in most individuals and often goes undetected before threatening vision. Glaucoma cannot be prevented, and any sight lost cannot be restored. That's why early intervention and strict adherence to IOP-lowering medications is so crucial to slowing or preventing vision loss, and why researchers hope this latest study can validate another option for helping prevent irreversible optic nerve head damage.

Per this prospective, randomized trial, researchers enrolled 90 POAG patients and directed a study group to 21 days of daily, hour-long mindfulness meditation (MM) under the supervision of a certified meditation teacher. The MM technique focused on eliciting a relaxation response (RR), previously documented to help lower cortisol levels, improve perfusion and oxygenation of the brain, and reduce oxidative stress and pro-inflammatory processes.

Interestingly, researchers note that subjects assigned to the MM group measured significant IOP reductions compared to the control with a greater than 25% reduction over 75% of the group; decreased mental stress (cortisol and β-endorphin) and inflammation (TNF-α) biomarkers; and differential expression of 109 genes associated with processes, such as neuronal death and survival, apoptosis, inflammation, and ocular hypertension mediated by retinal ganglion cell death, among others.

"Though (relaxation response) evoked by mind-body interventions is known to reduce stress and ameliorate a multitude of chronic conditions such as diabetes and cardiovascular disease, here we report, for the first time, confirmatory evidence of the therapeutic effect of MM in POAG," authors write.

"Mental or 'psychological' stress are known to be associated with IOP elevation, and in those who already have glaucoma, stress raises IOP even further. Mental stress may thus play a key role in acceleration of glaucoma pathogenesis and aggravation of its severity."

However, researchers note that future studies should address how long these changes last and whether MM helps visual field function over time. Also, they conclude more evidence is necessary to explore stress as a causal factor in glaucoma.

Is meditation in glaucoma practical?

Although glaucoma can develop without elevated IOP and increased IOP doesn't necessarily mean an individual will develop glaucoma, pressure is the most commonly recognized risk factor for glaucoma. Therefore, keeping IOP at a target pressure least likely to cause further optic nerve damage is the goal for glaucoma care. That's why regular use of prescription eye drops is the most common—and often first—line of treatment, while surgery also is  an option when medication isn't enough.

Several 'alternative' glaucoma therapies are often discussed for their transient IOP reduction properties, such as marijuana or exercise, but meditation might be the least intensive. So, could it help? A cautious 'possibly,' says Murray Fingeret, O.D., chief of the optometry section, Brooklyn/St. Albans Campus, Department of Veterans Administration New York Harbor Health Care System and clinical professor at the State University of New York College of Optometry.

"I never thought that IOP could be controlled by relaxation, but power calculations were done and an ample number were found in the study arms," Dr. Fingeret writes.

The results are hard to believe, and they're not without questions. For instance, meditation is not easily done and required a guided course, so what happened if subjects missed a day or were infrequent, Dr. Fingeret asks. Many adherence studies related to IOP medications show up to 50 % of individuals do not take their medications as prescribed, a relatively simple task compared to spending an hour relaxing, he points out. Obviously, the question of teaching these meditation techniques still must be addressed.

"Still, this is a very interesting study that if the results are confirmed by others, does fall into the place where 'it doesn't hurt,' and could be a recommended treatment for all," Dr. Fingeret says.