January 25, 2018
Call comes at 2018 Presidents’ Council, where volunteer leaders learned the ins and outs of leadership and advocacy. 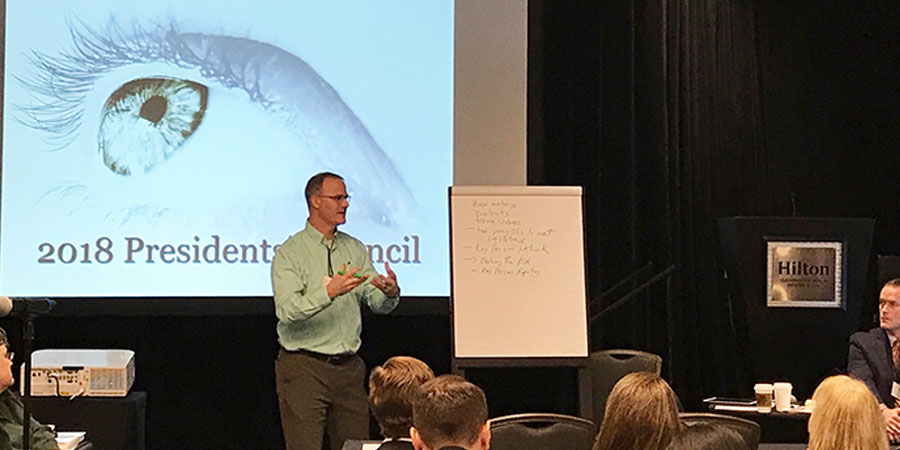 AOA President Christopher J. Quinn, O.D., called on all 53 optometric affiliates to attend the March 7 Federal Trade Commission workshop in Washington, D.C., to send a "powerful message" regarding their strong opposition to proposed changes in the Contact Lens Rule.

The purpose of the FTC workshop is to further explore contact lens marketplace competition, patient access, prescription release and portability, and other contact lens-related topics. In November 2016, the FTC proposed revisions to the Contact Lens Rule that the AOA contends are imbalanced and do little to address patient safety concerns. Read more about the AOA's objections to the proposed changes and what issues really needs to be addressed.

"It is essential that we mobilize to ensure that our profession's full perspective and range of expertise is included in every aspect of the discussion," Dr. Quinn told attendees. "We know that those who want to undermine the essential care doctors provide, the patient outcomes doctors achieve and the recognition in law and regulation of contact lenses as medical devices will be there in force.

"Which is why I am asking every state to send an official designee to join AOA's advocacy team at the workshop and directly represent doctors and patients from across the country," he added, noting that the AOA would provide one travel grant to each affiliate.

Presentations covered a variety of topics, including keynote speaker Bob Harris, CAE, on how to achieve "Organizational Excellence: Board Roles, Goals and Responsibilities," as well as sessions on running effective and efficient meetings, state and federal advocacy, emerging technologies and membership initiatives.

In his opening remarks to attendees, meeting moderator Chris Wroten, O.D., proposed a challenge. He urged them to follow the example of President Harry S. Truman.

"Truman was thrust into the presidency unexpectedly with the death of Franklin Delano Roosevelt, suddenly having to deal with Hitler and Nazi Germany, Imperial Japan, Stalin and Russia's aggressiveness, the nuclear bomb, the close of World War II and the economic recovery of the U.S., its allies, and Europe, and the start of the Cold War, among other events," Dr. Wroten said.

"Yet, despite being admittedly in over his head, Truman never tried to be FDR or anyone else he was not," he added. "He surrounded himself with good, loyal leaders; always gathered all the facts he could before making a decision; and then once he made a decision, he never shied away from it, saying his famous line, 'the buck stops here.' He aggressively gave and shared credit for accomplishments because the goal was the key, not his personal aggrandizement. He maintained impeccable personal ethics while he was in office and he was never outworked—he became known as the hardest—working president, and surprisingly to many, one of the top six presidents of all time, according to numerous rankings."

Attendees also heard highlights of AOA and affiliates' action in 2017-18, amid unprecedented challenges and threats to the practice of optometry and patients' care, including:

A sense of urgency and purpose

During the meeting, Deanna Alexander, O.D., of the AOA's State Government Relations Committee, conveyed a sense of urgency to the optometric leaders, noting that the pace of challenges to the profession are opportunities for the affiliates to work together on issues that advance the profession and preserve patient safety.

"It has never been more important for doctors of optometry to be proactive in advocating for legislation to recognize optometrists' ability to practice at the highest levels of education," Dr. Alexander said.