February 2, 2017
Renovation completed on time and under budget in November 2016. 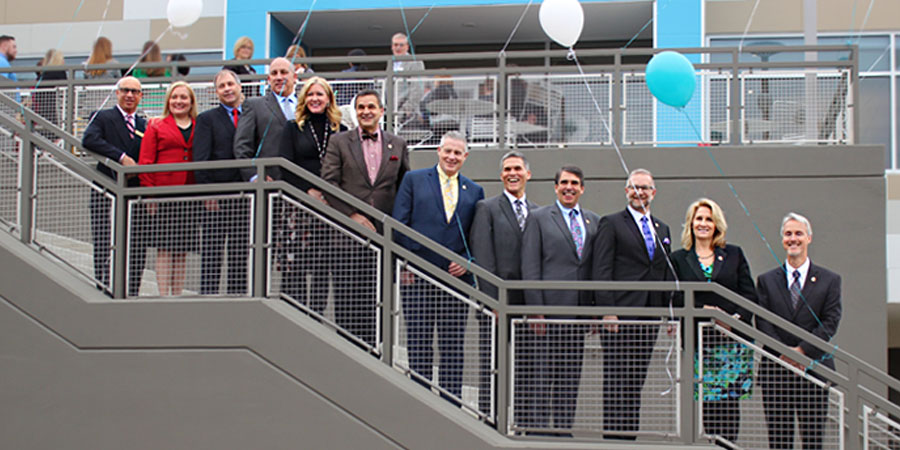 The AOA Board of Trustees and city of Creve Coeur Mayor Barry L. Glantz stand in front of the newly renovated AOA headquarters facility in St. Louis, Mo., at a grand opening celebration on Feb. 1, 2017.

On February 1, AOA President Andrea P. Thau, O.D., and the AOA Board of Trustees were joined by AOA staff, local officials and friends of optometry for the official ribbon cutting of the AOA's renovated national headquarters in St. Louis, Missouri.

In November 2016, a major renovation to the facility was completed, on time and under budget. The building renovation began in October 2015 without interruption of service to members. The renovation kicked off with a ceremony that included the AOA Board, AOA staff and federal, state and local government officials.

The AOA has occupied the building, which was constructed in 1968, since 1978. The facility has had no major work performed since the AOA took ownership. The renovated AOA headquarters has already significantly reduced annual maintenance costs and improved the facility's infrastructure, which will allow AOA to better serve its members.

"Just as the AOA maintains a strong foundation to advance optometry, we knew it was time to further strengthen our home with an eye toward building something that will grow with our members and our needs," Dr. Thau said at the ceremony. "This opening represents a renewal of the AOA's dedication to the St. Louis community and commitment to optometry and our member doctors."

"Our new building inspires a new way of thinking about, approaching and leading in health care, just as the health care system is evolving and changing," added Christopher J. Quinn, O.D., AOA president-elect. "I am excited to work with the staff, members and friends of optometry to set the course for the next 100 years of eye and vision health."