June 26, 2021
The 124th Annual AOA Congress elected the association’s 100th president alongside the 2021-2022 board and approved resolutions on diversity, inclusion and genetic therapy among others. 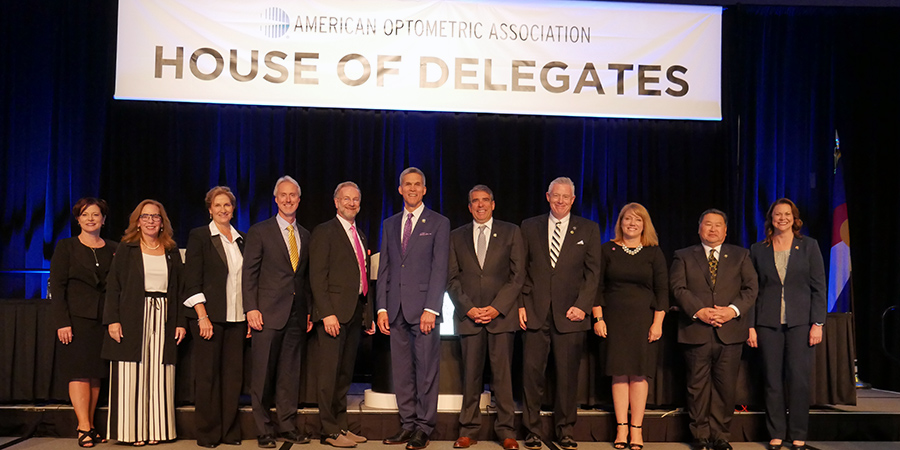 Concluding the final day of Optometry’s Meeting® in Denver, Colorado, the 124th Annual AOA Congress elected the AOA’s 2021-2022 Board of Trustees to help establish AOA policy and advocate for our profession, both at the state and federal level; help broaden optometry’s scope of practice nationwide; protect and defend our profession; and expand the public’s access to quality eye health and vision care.

In taking office as the AOA’s 100th president, Robert C. Layman, O.D., of Ohio, reflected on the extraordinary challenges brought on by the COVID-19 pandemic, but remarked how the AOA helped ensure optometry emerged from the crisis in a better position than before. But that achievement didn’t come without sacrifice and a hard assessment, both on a practice and association level.

“There can be no great victories in life unless you can overcome great adversity,” Dr. Layman said in quoting Woody Hayes, famed coach of The Ohio State University Buckeyes. “While true for optometry through my career, it also defines the year we just put behind us. The pandemic forced us to uncover deeper emotional resilience and rearrange our priority list.”

AOA Board of Trustees election

In his inaugural address before the AOA’s House of Delegates, Dr. Layman noted that coincidentally it wasn’t his first time leading in a centennial moment. In recounting his circuitous path to becoming the AOA’s 100th president, Dr. Layman also served as president of the Ohio Optometric Association in its 100-year anniversary. Now, Dr. Layman stands to serve at an equally momentous time in the profession’s history as a global pandemic subsides.

This moment comes as contemporary optometric practice advances in states nationwide coinciding with a growing population of Americans, 65 and older, with chronic health conditions. So, too, paradigm shifts seem likely with patients’ familiarity in telehealth increasing and imminent discussions about expanding Medicare to include a vision benefit. At the same time, Dr. Layman notes, payer issues, vision plans and review of the VA’s national practice standards remain ever-present advocacy challenges.

“It’s imperative that we stand up to the forces that drive a wedge between our doctor-patient relationships, trying to push disruptive technology of dubious value under the guise of patient convenience or telemedicine,” Dr. Layman said. “They willingly compromise patient safety for return on their venture capital investment. We have to push back.”

And that’s precisely what the AOA is doing, Dr. Layman noted, with a new public affinity campaign. The See and Be Seen campaign is optometry’s national outreach to tell the story of who doctors of optometry are, the breadth of care they deliver and the close relationships they have with their family of patients. These compelling stories not only share the criticality of care that optometry provides but also inspire new generations of doctors. Similarly, Dr. Layman acknowledged the strides in growing optometric leaders through the AOA’s Leadership Institute.

“My vision for optometry is that we successfully inspire and equip all doctors to practice full-scope contemporary eye and vision care,” Dr. Layman said in closing. “I see a new generation of 21st century advocates who are better leaders in their spheres of influence on behalf of our profession. I envision the public and health-policy decisionmakers understanding and respecting our unique contribution to the nation’s health.”

Additionally, the AOA Congress approved the adoption of several resolution amendments, as well as an altogether new resolution, including:

The latest updates from Optometry’s Meeting

Want to know all the latest news and updates from our profession’s premier meeting in Denver? The AOA’s full event coverage and social media offer a glimpse of the excitement at Optometry’s Meeting—follow aoa.org/news for daily news roundups or see what’s trending on the #OM2021 social media wall.