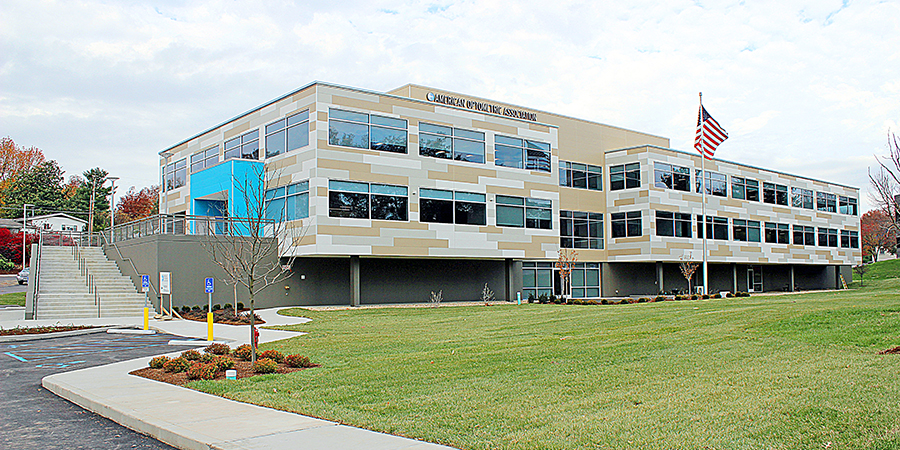 On time, under budget and cost-effective: AOA's headquarters renovation exhibited the same attention to detail that goes into its professional advocacy, and a regional construction council took notice.

The AOA, headquartered in the St. Louis, Missouri area, was one of seven regional projects considered for the elite award.

The distinction recognizes exceptional achievement in design and construction cost effectiveness through successful implementation of one or more of the 17 Best Practices validated by the Construction Industry Institute to improve cost, schedule and quality of construction projects.

"To complete the project on time and under budget was evidence of the amazing team effort produced," says Ryan Hayes, C.P.A., AOA's chief financial officer. "The Best Practices Award further exemplified the success of this project."

For several years, AOA leaders recognized the need to retrofit and modernize the aging, 45,000-square-foot St. Louis headquarters. After moving into the building in 1978—already a decade old at the time—the AOA had not performed any major work on the structure or its systems, and in October 2015, commenced a major renovation project after careful planning and budgeting.

Concluding November 2016 with no interruption to member services during that time, the renovation has already significantly reduced annual maintenance costs and improved the facility's infrastructure, in turn allowing AOA to better serve its members.

"Our new building inspires a new way of thinking about, approaching and leading in health care, just as the health care system is evolving and changing," said Christopher J. Quinn, O.D., AOA president-elect, in a building dedication ceremony on Feb. 1. "I am excited to work with the staff, members and friends of optometry to set the course for the next 100 years of eye and vision health."