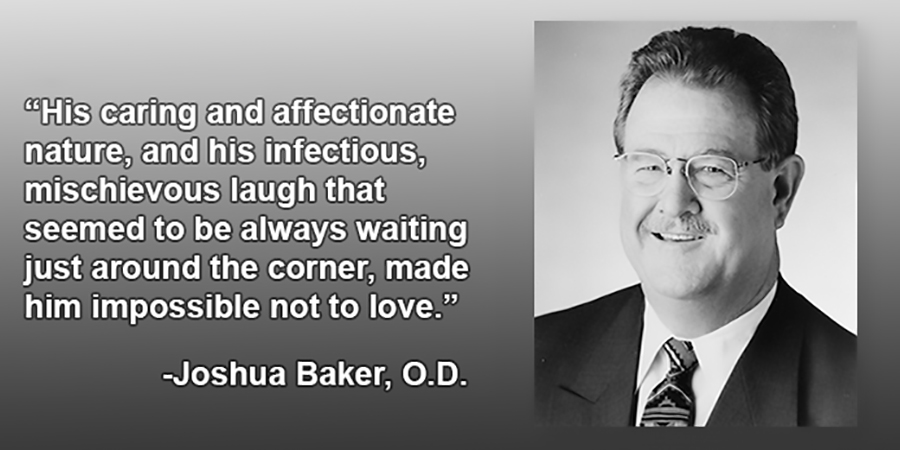 It is with great sadness that AOA notes the passing of its 74th president, Donald E. Jarnagin, O.D., 74, on Sunday, March 3. A charismatic educator and mentor, and a passionate optometric leader who pioneered the advancement of the profession, Dr. Jarnagin passed following a long battle with cancer while on a mission trip in Guatemala.

A resident of Peoria, Arizona, Dr. Jarnagin is remembered not only for his professional leadership as AOA president, 1995-96, and Arizona Optometric Association (AZOA) president, 1977-78, but also for being an ardent champion for students, faculty and staff alike as Midwestern University (MWU) Arizona College of Optometry (AZCOPT) dean.

"Optometry was just perfect for me," Dr. Jarnagin said in a StoryCorps interview, recorded by the Optometric Historical Society on Feb. 22, 2019. Listen as Dr. Jarnagin describes his life, work and developments in optometry over the course of his career.

"I feel that I sat on the shoulders of those who came before me and I was able to say, 'okay, here's what we can do.' I could see a brighter future for optometry—not that it was a bad place—but to improve the patient care in the communities that we served, that's what I wanted to do."

Dr. Jarnagin, a graduate of Arizona State University before receiving his Doctor of Optometry degree from Southern California College of Optometry (SCCO) in 1970, was drafted into the U.S. Army as a Captain and Optometry Officer in the Medical Service Corps from 1971-1973, where he received an Army Commendation Medal. He then returned to Arizona and entered private practice with his own personal doctor of optometry who had provided his vision care as a youth. Less than a decade later, Dr. Jarnagin would ascend AZOA's leadership as president and later as AOA president. He served more than 30 years in private practice, caring for the community of Glendale and the West Valley, before starting a new chapter as optometric educator and leader.

In 2007, Dr. Jarnagin joined AZCOPT faculty and began providing care at the MWU Multispecialty Clinic. Only three years later, he would be appointed as interim dean—later, dean—of the college. Dr. Jarnagin championed efforts for full accreditation; established new rotations, residencies and external clinics; and inaugurated the MWU Eye Institute, AZCOPT notes. He led the college until his retirement in 2016 but continued inspiring students and faculty alike as a mentor and fervent volunteer.

One of the founding fathers of the Great Western Council of Optometry (GWCO), Dr. Jarnagin was recognized with numerous awards throughout his career, including "O.D. of the Year" from the Central Arizona Optometry Society, AZOA and GWCO. The latter two also bestowed Dr. Jarnagin with Lifetime Achievement Awards. Additionally, SCCO honored him with the Circle of Vision Distinguished Individual Philanthropist Award and MWU awarded him the Shooting Star Award for community service along with his wife, Sharon.

Involved in numerous community service organizations, Dr. Jarnagin was passionate volunteering with MWU/DOCARE multidisciplinary medical missions to Guatemala that provide eye care and glasses to underserved populations. It was on one of these recent volunteer trips that he passed away.

Joshua Baker, O.D., AZCOPT dean, says he was privileged to call Dr. Jarnagin a mentor and friend. It was his emphasis for caring for each other and looking after one another that has left the most lasting impact on the program, Dr. Baker.

"His caring and affectionate nature, and his infectious, mischievous laugh that seemed to be always waiting just around the corner, made him impossible not to love," Dr. Baker notes.

"Each of us can likely recall a time we were struggling with something at work, or at home or in our studies, and Dr. Jarnagin would be there to put his arms around us, to encourage us, to help us in any way he could. I believe he felt that was his primary objective as dean, to shepherd us through the most difficult moments and to be a constant source of support and encouragement."

That's precisely the kind of person Kevin Alexander, O.D., Ph.D., Marshall B. Ketchum University SCCO president, recalls of the man who helped recruit Dr. Alexander for SCCO. His unflagging support and generosity even culminated in the naming of SCCO's Jarnagin Center for Primary Eye Care.

"He was one of those people you couldn't help but like; you enjoyed talking with him," Dr. Alexander says. "When you think of his qualities, he was the perfect candidate for being a dean—it's all about leadership, and he had that in spades. He's our close friend and we're going to miss him."

"'Do the right thing, even when no one is watching,' is a quote that I'll never forget hearing Dr. Jarnagin say so many times to new doctors at AZCOPT's graduation,'" Dr. Meier writes. "It really says a lot about the man Don was."

Adds AOA Past President T. Joel Byars, O.D.: "Dr. Jarnagin was a leader, a mentor and a friend to many, and I know we will all agree his absence will be felt across our beloved profession."