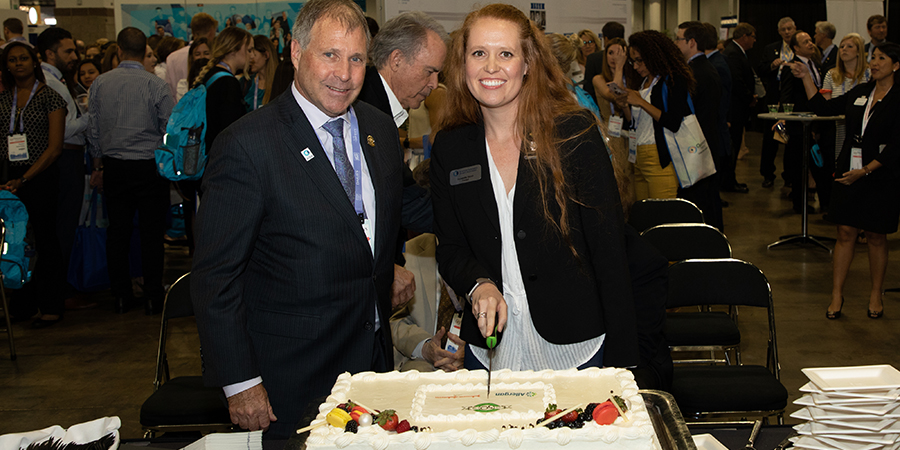 Excerpted from page 30 of the June 2018 edition of AOA Focus.

This year marks the 50th anniversary of the American Optometric Student Association (AOSA), and there were celebrations (thanks to sponsors Johnson & Johnson Vision, Allergan, Alcon Vision Care and Shire) honors and unveilings to mark the occasion during the 2018 Optometry's Meeting ®.

The AOSA unveiled an all-new logo, in addition to the launch of a redesigned student publication, AOSA Foresight. During a special reception, individuals were honored for their contributions to the student optometric association, and tomorrow's brightest leaders were recognized.

"Reaching the 50th milestone is important for and to the AOSA," says Storch, a fourth-year student at Southern California College of Optometry at Marshall B. Ketchum University, who was sworn in this past April.

"It shows that students have continued to care about the profession and want to be a part of where it is heading."

In an excerpt from AOA Focus, past AOSA presidents from each decade share what they learned from their service and how it shaped their professional careers.

AOSA was organized by three co-founders in 1968: Ellis Hoffman of Pennsylvania College of Optometry (PCO), Burton Worrell of the University of California at Berkeley, and myself. I was a student at Indiana University (IU) in Bloomington at the time and became the first president.

That first year, in 1968, the AOSA represented about 40% of the optometry students among all schools. In five years, membership climbed to 80% and has remained at least that in the following 45 years.

During the 1960s, college-age students affected everything from social justice to racial discrimination to Vietnam. Of course, the efforts by optometry students in the '60s were more sedate, but the youthful forces for change and contribution stimulated the formation of the AOSA. There was a major concern at the time because health professional education was being supported by the federal government, and Congress began to withdraw funds in the 1970s. AOSA, including Anthony DiStefano (PCO), John Fawcett (IU) and Ronald Ferrucci (MCO), made optometry leaders prominent among many student medical organizations through congressional testimonies, lobbying and leadership.

Throughout its history, the AOA has had a lot to do with AOSA's growth. The interchange among the different generations makes optometry stronger professionally through the integration of those having the strength of experience and those who bring new ideas and enthusiasm.

In April 1973, I was elected the sixth AOSA president at its third-annual conference at Southern California College of Optometry. The strong organizational work of the AOSA presidents who preceded me had put it in a great position to advance, and the AOSA achieved a landmark accomplishment in June 1973 at the AOA Congress in San Francisco when the AOA House of Delegates (HOD) voted unanimously to allow students a vote in the AOA HOD. It was a proud moment in my young professional life to be seated among my student peers in that first voting delegation of students.

An important element in the success of the young organization was its official acceptance by the government as part of the Student Advisory Committee (SAC), a group funded by the Bureau of Health Manpower Education at NIH. SAC was a consortium of the student presidents of the eight major health professions.

It met quarterly to present student views on government policies, procedures and legislation, which affected health students' education. When this group was invited to present testimony before Congress on important health education initiatives, incredibly the SAC group selected the AOSA president to represent the entire group on three different occasions!

However, my fondest memories of my presidential year was what I perceived as the full acceptance of students into the entire family of optometric organizations. During my tenure, AOSA established formal liaisons with not only the AOA but also with many of the organizations that formed the framework of all our profession does: the Association of Schools and Colleges of Optometry, the National Board of Examiners in Optometry (NBEO), and the International Association of Boards of Examiners in Optometry (now called ARBO), among others.

In 1985, women made up a small percentage of the profession with very few female leaders, but like most medical fields, the number was growing. In January of that year, the AOSA elected an all-female executive team: Michelle Staarman of Ohio State University; Geri Frazier of Northeastern State University; Linda Chin of State University of New York; and myself, of Southern California College of Optometry (now Marshall B. Ketchum University), as president. The all-women executive council and first woman president were firsts for our organization. That year, the AOSA had 4,000 members and held its convention in St. Louis, on a bitterly cold weekend. The AOSA had rented the lobby/museum area on the first floor of the Gateway Arch for a reception, and small groups of students took turns, riding the elevators to the top. Although it was freezing outside, students waiting for their view from the top went outside where we could hear them shouting school chants and showing their school spirit. When it was my turn to ride to the top of the Arch, I finally saw what the students had been doing outside. In the snow, each school's student group had stamped out their college and university letters, each bigger than the next. It was clear that gender didn't matter—male or female, we were all optometry students. Almost every school was represented and school spirit and AOSA pride were clearly spelled out.

My most vivid memory as AOSA president was leading a student letter-writing campaign.

At that time, optometry students paid the highest professional board fees. We educated our peers on the issue and encouraged them to voice their concern with the exorbitant NBEO boards fees. The AOSA Board of Trustees supplied students at each school with a letter template and the NBEO office address. When I attended the next NBEO board meeting as the student representative, it was empowering to see several large canvas mail bags filled with student letters. Even though the board fees were reduced by a mere $20, we felt like we had won a moral victory! This experience taught me strength through unity and the importance of grass-roots efforts. These lessons are relevant today as forces outside optometry are trying to disrupt patient care. Now more than ever, it's important for every optometrist to be vocal and to get involved in protecting our profession and the patients we serve.

I learned about the interworkings of the many associations and the dynamics between people in our profession with expertise in very different areas. As leaders, it is easy to get into the mindset that the organization we lead is vastly unique and our perspectives are paramount. However, I have seen that optometry benefits the most when these experts are working together in the interest of patient care and professional advancement. One shining example of this was the Optometry 2020 summits. In 2005-2006, hundreds of forward-thinking optometrists participated in a series of events to vision cast about the future of our profession. We took a serious look at where we were and where we were headed, and as I remember there were no egos, simply vision casting about the future of our profession. While we didn't get everything correct, much of what we see today as the main goals for our associations are reflected in the outcomes of those meetings.

My most vivid memory? Having the opportunity to address fellow optometry students at the inaugural AOA+ event in Washington, D.C., last year. I will never forget stepping up to the podium and looking out to see 2,300 colleagues. Straight ahead was the National Mall, and I could see clear to the Lincoln Memorial, with the U.S. Capitol building behind me. It was surreal. Before I spoke, I looked to my right and saw my fellow classmates from Pacific University who were cheering, and to my left were my friends from AOSA and other familiar faces. And beside them were future optometrists, all with a shared passion of providing the highest level of vision care to their patients. My goal was to motivate them all to be engaged to ensure that they could live out that passion. It's early in my optometric career, but I think that my term as president has left me motivated to continue to volunteer and give back to optometry. It also has left me motivated to continue giving back to students and being sure to always take the time to explain the importance of advocacy in the profession. I also learned the importance of mentorship. I was fortunate to have multiple mentors who provided me with guidance, support and also took the time to introduce me to others in the profession. It's important that each of us takes on the responsibility of serving as mentors to the next generation of doctors of optometry.