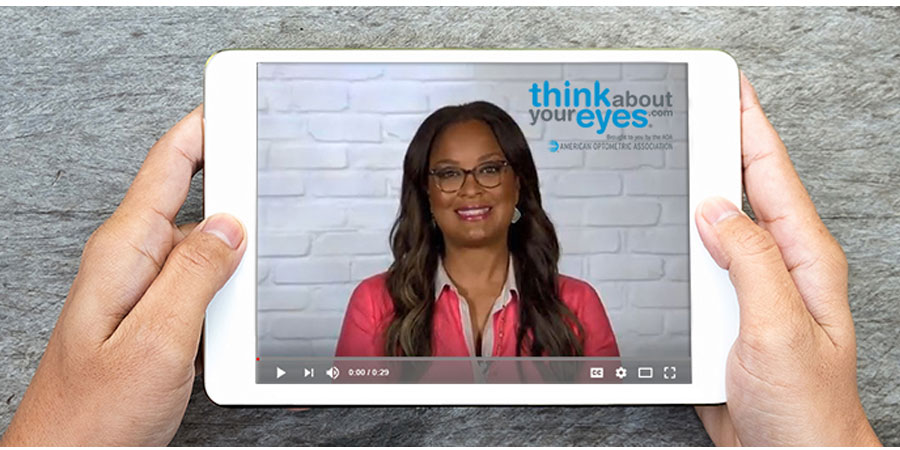 Laila Ali was 11 years old before a teacher noticed her squinting to read the board. Then there were the headaches, trouble focusing on tasks and low self-esteem. Her mother didn't see the signs right away.

"She was relying on school exams or thinking that I was going to be able to tell her I had blurry vision. But to me that was normal, so I wasn't able to communicate that to her," Ali told Yahoo Lifestyle. Never had Ali gone for an annual eye exam.

"Luckily at 11 years old I went and got glasses, and I've been wearing them ever since, up until I became a boxer."

That's right, she's that Ali—daughter of the legendary sports figure, Muhammad Ali, and an undefeated world-champion boxer in her own right turned lifestyle expert and television personality. Now retired from the ring after claiming multiple world titles, the mother of two reflects on her own experience needing glasses when it comes to her children. In fact, her daughter Sydney's own vision problems appeared in much a similar way: she couldn't see the board.

"As a mom, I know the importance of getting an annual eye exam for children's success in school and overall confidence," Ali says. That's why she's proud to partner with Think About Your Eyes and encourage parents to get an annual, comprehensive eye exam for their children this summer.

The "School's Out" campaign, launched earlier this June by Think About Your Eyes, in partnership with the AOA, serves to generate awareness around the importance of annual, comprehensive eye exams, educate parents about pediatric eye care ahead of the school year, and inspire them to schedule an eye exam with a doctor of optometry. Amplified by Ali's own personal account and appeal to parents, Think About Your Eyes' message is resonating, says Samuel D. Pierce, O.D., AOA president.

Two weeks after a kick-off satellite media tour with Ali and Justin Bazan, O.D., AOA Leadership Development Committee member, the summer campaign generated over 4 million impressions across 25 interviews on TV, radio and web that appeared in markets ranging from New York to Phoenix.

Leveraging her own social media prowess, Ali's personal Facebook post about the importance of comprehensive eye exams reached nearly 800,000 people and generated 1,500-plus link clicks to Think About Your Eyes' doctor-locator page—in only two weeks—while her Instagram account measured over 87,500 views. But Ali's efforts are only the tip of the iceberg in an inclusive social media strategy to drive home the importance of regular, comprehensive eye care.

Think About Your Eyes is not only turning heads, but it's also prompting action.

Coming off its biggest year yet, Think About Your Eyes generated more than 3.4 million eye exams and $752 million in industry revenue in 2017 alone. Importantly, that awareness-turned-action also is helping to promote healthy routines and detect sight- and sometimes life-threatening conditions before patients were even aware.

Of those 3.4 million eye exams directly attributable to the Think About Your Eyes' campaign, eye care professionals treated:

Put another way: Think About Your Eyes helped drive patients to eye doctors for the care of 710,600 cases of systemic diseases or disorders, and of those nearly 63% were altogether new diagnoses.

"We've had a tremendous impact on the market, in our offices and most importantly on the health of Americans," remarked Steven A. Loomis, O.D., Think About Your Eyes campaign chairman and AOA past president, during AOA's House of Delegates.

The AOA, 44 state associations and AFOS, and thousands of individual doctors of optometry joined industry partners in creating the most impactful campaign in the history of American's eye care, Dr. Loomis says. Think About Your Eyes' message has been heard by more than 150 million Americans, and clearly many are taking the next step to visit the campaign website.

Here, patients can access not only eye care and vision health information, but also a doctor locator tool the helps drive patients into listed practices. Already, the campaign website has welcomed more than 2.5 million visitors seeking information about their vision or finding a doctor. Here's how you can list your practice on Think About Your Eyes' doctor locator:

Read more AOA's commitment to Think About Your Eyes and how this campaign for eye care continues building on success.