January 17, 2019
While doctors of optometry are certainly Americans’ primary eye care physicians, it could be argued that the profession is heading toward a more encompassing primary care model. The distinction is in optometry’s role in diagnosing, managing and treating systemic as well as ocular conditions. 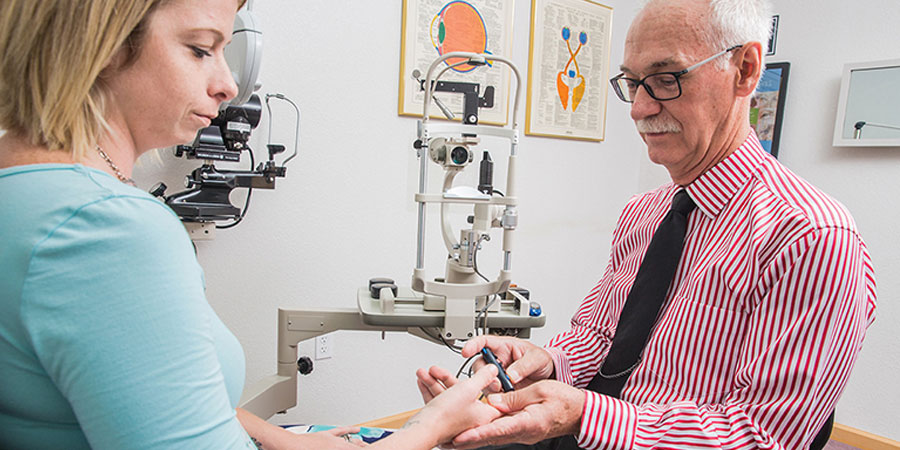 Excerpted from page 32 of the October 2018 edition of AOA Focus.

Idiopathic intracranial hypertension (IIH) isn't common, with incidence of fewer than 1 in 100,000 American women. Simple arithmetic alone suggests that one of these cases developing in the 32,000-strong town of Gillette, Wyoming, happens about as often as a blue moon. So it's safe to say Roger Jordan, O.D., wasn't expecting it when such a case wound up in his exam chair.

There were red flags: reduced visual acuity and bilateral swollen nerves, but normal body weight. The 8-year-old patient was referred for MRI and bloodwork, only to deepen the mystery further when neither returned definitive results. Ultimately, a spinal tap concluded the diagnosis.

Oral acetazolamide, often the first-line treatment for IIH, was prescribed by the girl's neurologist, who agreed that a co-managed model of care with Dr. Jordan was best. For eight years, Dr. Jordan managed dosage through in-office testing.

"We had to totally manage her case when the neurologist left," Dr. Jordan says. "Although the patient wanted me to continue managing her case, eventually she found a new neurologist to take over."

"Primary care is full-scope to the upmost level of state law as it stands, and it absolutely elevates our status in the medical community," Dr. Jordan says.

"Patients appreciate the total care of services we provide, thus making it easier for them; it reduces health care costs for patients and insurance programs, federally and statewide; and it elevates the perception of our profession in the eyes of the complete medical community, showing optometry goes way beyond just glasses and contact lenses."

Going above and beyond

In terms of state scope of practice, it's been some time since Wyoming was considered among the most expansive, Dr. Jordan says. But with the nearest ophthalmologist 135 miles away and coming to practice only once per week, there's every opportunity for Dr. Jordan and other doctors of optometry in his office to practice the fullest scope permissible. Even then, that's a lot.

All five doctors have hospital privileges, offering eye care for premature babies and performing emergency department visits or floor consults on patients with diabetes. They order blood and radiological tests as necessary, and their office offers 24-hour emergency on-call, most often utilized for foreign body removal stemming from the town's coal industry. The services bolstered the practice's standing in the local medical community, Dr. Jordan says.

"They send all patients who need diabetic eye exams and other potential ocular side effects from medications or systemic diseases," he says. "We truly co-manage with all specialties, such as internal medicine, neurology, endocrinology, and the ophthalmology group we refer to often won't see a patient until we triage them."

To the extent that state scope of practice allows, optometry nationwide can be a solution to an emerging primary care problem for the very reasons Dr. Jordan describes.

Responding to an inaccurate Federal Trade Commission letter that stated 24% of U.S. counties (or county equivalents) had no access to a doctor of optometry or ophthalmologist, the AOA Health Policy Institute set the record straight. In fact, only half of that have altogether no access to eye doctors, or about 3 million Americans. Data pulled from the AOA's system and state boards show that doctors of optometry practice in more than 10,176 communities in the U.S., and furthermore, 39% of U.S. counties have access to a doctor of optometry but not an ophthalmologist.

Such data reinforces an intrinsic truth in the profession: For many Americans, doctors of optometry are not only the sole provider of eye care, but also the only health care provider many will see in any given year. The latter was cited in a United Healthcare white paper, Integrating Eye Care with Disease Management: It's Not Just About Diabetes Anymore, that stated, "People often visit their [eye care provider] more frequently than their primary care provider, so ECPs have the opportunity to be gatekeepers to health." Therefore, is it any stretch to call doctors of optometry primary care physicians?

Speaking to the profession's future during June's Optometry's Meeting® in Denver, Colorado, Dr. Pierce committed AOA's support to states seeking scope expansion efforts, as he says, to evaluate where they are, where they would like to be and how they will get there. He draws a distinction between "vertical" and "horizontal" expansion, where the first would apply to adding procedures; the second, the ability to treat systemic conditions.

Dr. Pierce uses the example of a patient with diabetes who hadn't seen a PCP or endocrinologist in several years. Horizontal expansion might allow doctors of optometry to check blood sugar, prescribe medication and begin diabetic education and consultation, all the while referring to the specialist. Likewise, the same could be said for a patient with hypertension.

"Every single doctor of optometry needs to practice at the highest level of their state law or optometric practice act. In doing so and staying current, it then becomes much easier to transition into offering next-level care. There will be greater demands on eye health and vision care in the future, and the solution is practicing at the highest standards available with respect to medical eye care."

It's not as far off as one would think.

Additionally, the state's scope of practice expands to include new, noninvasive technology as it's developed, and the law empowers the board of optometry to make approvals beyond those specially authorized under statute.

Prior to this measure, California required a law passed to allow optometry to use new treatments, medications or technologies anytime a new one became available, explains Bill Howe, COA executive director. So, too, the measure allows trained, certified doctors of optometry to administer certain vaccinations—a first in the nation.

"Many times, the only doctor a patient will see is their optometrist. If we can contribute as a public health resource and o­ffer services that pharmacists and other allied health professions do already, then it's going to be of benefit to patients," Dr. Redman says.

"Eventually I'd look forward to helping track patients' BMI, diabetes—either treat for diabetes or actually take part in the protocol to make sure we're managing these patients. If we can contribute to the care of patients with these diabetic or hypertensive problems, then we will be part of that solution."

But California is only among the most recent of scope wins. In 2014, Louisiana followed Kentucky in expanding its scope of practice to include laser procedures, such as YAG capsulotomy, peripheral iridotomy and selective laser trabeculoplasty, as well as injectable medications and other emerging technologies and treatments. Both states were among others who allowed doctors of optometry to order diagnostic labs and neuroimaging.

Chris Wroten, O.D., AOA Federal Relations Committee member and past president of the Optometry Association of Louisiana, says the practice act specifically authorizes doctors of optometry to administer vaccinations in times of need and to treat any disease or disorder of the eye and its adjacent structures by any means necessary with very broadly defined restrictions. The same is true of Oklahoma, and Alaska recently granted its state board authority to determine scope.

"The most useful component of practice statutes with board autonomy and/or exclusionary scope of practice language like these is how inherently adaptable they are to new therapies and advances in eye care, and beyond," Dr. Wroten says. "When new medications are approved or technologies are launched, they can implicitly be utilized without having to go back to the Legislature.

"This is a hard-earned victory in California, and I can't wait for the day when doctors of optometry in every state are able to provide such a high level of care to their patients, and to further demonstrate to health insurers, accountable care organizations and other medical professionals the critical role we play in the overall health care system."

Already, outside of ophthalmology, there's probably no other group of physicians that optometry interacts with more than PCPs, Dr. Wroten says. However, there remains debate about how optometry can be involved in treating systemic conditions and the ultimate role for optometry within primary care.

New clinical studies and medical breakthroughs reveal an ever-growing number of eye-related diagnostic instruments and tests for systemic diseases, many of which allow easier, earlier and more accurate diagnosis than current lab tests. In seconds, emerging noninvasive ocular technologies can diagnose Type 2 diabetes, predict peripheral neuropathy in patients with Type 1 diabetes, diagnose multiple sclerosis, predict Alzheimer's disease and cognitive decline and more, according to Dr. Wroten. Additionally, an increasing number of systemic medications are demonstrating therapeutic effects on ocular diseases, while the number of systemic pharmaceuticals with ocular side effects continues to increase, too, he says, meaning optometry will have an even greater role in prescribing these drugs and managing their side effects.

"With the continuing evolution of health care, we must stay actively engaged with other health care providers and participate in current and future programs that objectively demonstrate quality of care, especially our profession's own clinical data registry, AOA MORE," Dr. Wroten adds. "If we fail to do so, we run a very real risk of isolating ourselves and being left out of future models of care.

"As doctors of optometry we have so much to offer our patients in relation to their quality of life and overall health that we must be more visible and more active than ever before to maximize our positive impact on the health care system at large."

The bottom line? Practicing full-scope optometry is practicing primary care, says Christopher Wolfe, O.D., AOA State Government Relations Committee chair. Understanding when ocular diseases are manifestations of systemic diseases, then serving as a conduit to a multitude of other specialists, is what makes optometry the critical, primary care resource in communities nationwide. That's why as health care advances, the profession owes it to patients to evolve optometric practices with the most advanced treatment options available.

"Even though each state has a different scope of practice, by practicing to the fullest scope we will be maximizing patients' access to our services," Dr. Wolfe says. "It will allow us to see areas that are not authorized to help our patients, and that will serve as an impetus for us to enhance our scope of practice."

Because delivering—and advocating for—quality patient care is all in a day's work.