May 9, 2018
Current generations are graduating with the highest student loan debt burdens ever, but there are ways to structure that debt to make room for your dream career. 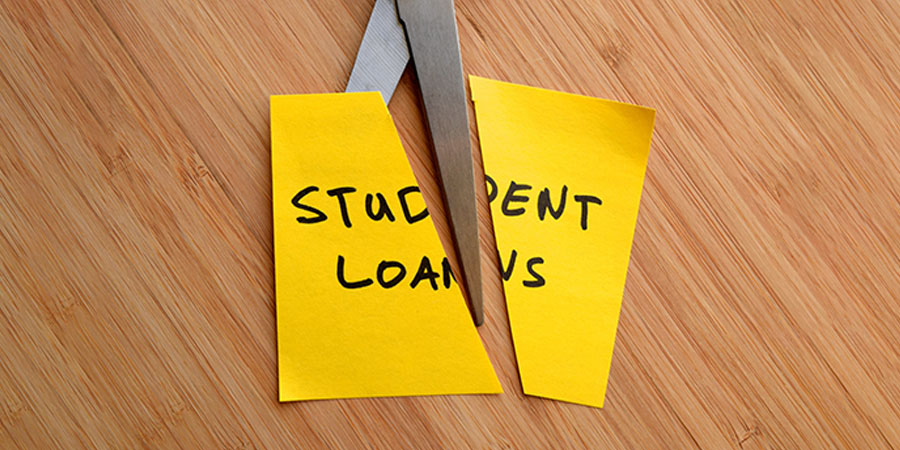 Excerpted from page 30 of the April/May 2018 edition of AOA Focus.

Amanda Nanasy, O.D., has the job and the life of her dreams. Eight years out of school, she is a partner in a large, six-doctor practice in South Florida, and a team doctor for the Miami Dolphins. She owns her first home that she shares with her husband and two young children.

"My student loan is like an invisible house that I pay a mortgage on every month," Dr. Nanasy says with a laugh. She's cheerful about it, she says, because though the "mortgage" on her education is as big as a house, it's also totally worth it.

"Students about to graduate probably think that they can't have the opportunities they would like in their careers because of debt. But it really shouldn't be looked at as an obstacle," she says. "It can be done."

Indeed, while current generations of doctors of optometry are graduating with the highest student loan debt burdens of any generation, there are ways to structure that debt to make room for your dream career.

When most doctors of optometry graduate, their first student loan payment can seem like a doozy.

"For someone with $150,000 in student loans, monthly payments could be as much as $1,200 to $1,500 a month," says Alex Macielak, business development expert at Laurel Road. "That can be a burden just coming out of school."

Fortunately, you aren't obligated to stick to the amount on the monthly payments when you first graduate. The federal government has options that include 20-year terms, a graduated loan program that starts the payments lower and slowly raises them over the years to a higher amount, assuming income will rise commensurately. There are 25-year terms. And there are even income-driven plans that determine a manageable monthly payment based on your income, for 25 years or until the debt is paid off.

One thing to consider is loan consolidation, says Macielak. Most students have various loans with various interest rates. The higher the interest rate, the more you'll pay over the term of the loan.

If you can get that interest to around 2%, you'll be paying below the rate of inflation. That means your loan interest will grow at a slower rate than inflation. Often this means that you're better off paying it slowly and investing the difference in higher-interest products.

To get there, you might have to refinance. That's where Laurel Road comes in. AOA members automatically receive a 0.25% rate discount just for maintaining their membership.

You also have the potential for lower interest rates, depending on your credit, your loan amount and your income, with a private loan.

"Cutting interest by 2% can save you $20,000 over the course of your loan, depending on factors such as your loan balance and interest rate," Macielak says.

There are tradeoffs: Terms are less flexible under a private loan than a government-administered one. For instance, you can receive a forbearance, which will relieve you of having to pay your loan for up to a few years, depending on the reason you are unable to pay, under a government loan. Private loan servicers generally cap lifetime forbearance to one year, and some won't allow you to take those 12 months all at once. Most private loan services don't offer income-driven repayment plans, as the federal government does. And congressionally approved loan forgiveness is only available to those with federal student loans.

The point, Macielak says, is that there's no one right repayment strategy that will work for everyone.

"A borrower should do their homework," he says. "You can't look at your student loan refinancing in a silo, apart from the rest of your life. It has to be part of a holistic financial plan."

So what might some of those plans look like? AOA Focus talked to some recent graduates to find out how they've structured their debt repayment to support their career goals, rather than curtail them.

Keep the debt, buy the practice

"I had the dream of walking out of school and into a practice that was five days a week, eventually buying in, and ending up retiring owning the place," Dr. Elson says.

So it should be no surprise that, two years after graduating from optometry school, he's already working on a plan to buy into a private practice in Tustin, California.

And he's not letting his $250,000 in student loan debt stop him. As soon as he could, he got away from the 6.8% interest rate that some of those loans came with. About six months after graduation, he refinanced about half his debt—loans with interest rates above 5%—with a private company. That brought his highest interest rate down to 4.6%.

Now he plans to pay it slowly. He's on a 15-year, graduated payment plan that starts lower and slowly increases as, presumably, his income will. Lowering that monthly payment means he has the money to investigate business loan options to buy into the practice he works at in Tustin.

"Having debt doesn't scare me," he says. "Fortune 500 companies have millions of dollars in debt for a reason. If I were paying more interest, it would be different. But loans are an investment in yourself."

Nicholas Green, O.D., graduated from The Ohio State University College of Optometry and is completing a residency in family practice and ocular disease at Northeastern State College of Optometry. In doing so, he splits his time between the school, the tribally run health center at the Cherokee Nation, and applying for full-time jobs.

Dr. Green always thought he might follow in the footsteps of family members who worked at Veteran Administration (VA) hospitals. While pay at VAs has been comparable to what he's seeing at private practices, he says VAs also offer more benefits.

"Some VAs even pay for some of your loans," he says. "Just looking from a dollars-and-cents perspective, it can be a better value than some private practices."

He won't know the answer until he completes his residency and finds the right first job for him. In the meantime, he has taken a forbearance on his student loans. He is still paying what he can on the loan during the forbearance, he says. But the months when things are tight, he says he's grateful to have a bit of a reprieve.

If you ask Lauren Haverly, O.D., at Apple Valley Eye Care Clinic in Minnesota, career development is a long game. So is student loan repayment.

"One day I want to be a partner and own a private practice," says Dr. Haverly, who specializes in binocular vision and pediatrics. "Working in this private practice now gives me a chance to learn from other optometrists and learn the business side, too."

She is taking the same approach to loan repayment and wealth management. Dr. Haverly has a federal loan that she's paying back on a 25-year term. For her, like Dr. Nanasy, the more than $200,000 she graduated with in 2014 is "like a cabin you own up north but can never use."

But she and her wife have a plan: Though the repayment terms are 25 years, bringing her minimum payment down, the couple actually is paying twice the minimum monthly, "and whatever extra income goes toward that, too." In addition, they are contributing to mutual funds and retirement. The goal, she says, is to "find the balance between paying student loans off and investing in our future."

If all goes according to plan, it will be paid off in 10 years, she says. And then that money can go toward saving to buy into a practice, should that option become available. The couple already own a house.

And while they considered refinancing the loan privately, there was another drawback that kept them working with the federal government: If Dr. Haverly were to pass away, her wife would be obligated to keep repaying a private loan. With a federal loan, the obligation ends with her.

"I chose the 25 years for peace of mind," she says. "Emergencies happen—so why wouldn't you choose a longer repayment and then just pay more? It gives you more security and more comfort. And it's easier to sleep at night."

When optometry students are in school, they hear that they should continue to "live like a student" in their first few years out of school. That way they can pay off bills and loans or work on building up savings. That's what Dr. Nanasy is doing.

She sees her student loans as the good kind of debt, and is paying the minimum on the longest-term repayment plan the government has to offer. She hears the voice of one financial guru telling her to "live like a student" now so she can "live like no other" later—saving money and keeping other debts paid off. She knows she'll get there.

And she will, if the experience of Justin Bazan, O.D., is any indication. Like Dr. Nanasy, Dr. Bazan continued to live frugally and with roommates in the extremely expensive New York City area after graduating from school 15 years ago. He graduated with less than $100,000 in student loan debt. But he also didn't buy an apartment or a car when he could have, because he was determined to start a practice cold in an expensive market. He consolidated his loans at less than a 3% interest rate, making his payments and rates "so low, I have it on auto-pay and don't even think about it."

"It has made more sense to use available income to invest than to pay down the [student loan] balance," he says. "I may revisit this after my business loan is paid off."

Dr. Bazan started and owns Park Slope Eye in Brooklyn. Now, not only does he have his student loans paying at a low interest rate, but Dr. Bazan also is set to finish paying off his graduate business loan in July.

Then, he'll suddenly have $4,000 more a month than he does now. It's hard to imagine what one might do with that much money, he says. But Dr. Bazan is being frugal, still.

Following the advice of a financial advisor, he'll also put half of that $4,000 into investments. Still, he says, "This is the payoff for all these years of work."

"It's awesome doing the thing you love and being able to afford it. I always had the end goal in sight. Even if you think it's a remote possibility that you'll achieve that goal, get started now."