February 27, 2020
The Internet went into a frenzy yesterday because of a photo of a dress. The photo was posted to Tumblr, and as it spread, people divided into "Team White and Gold" and "Team Blue and Black." 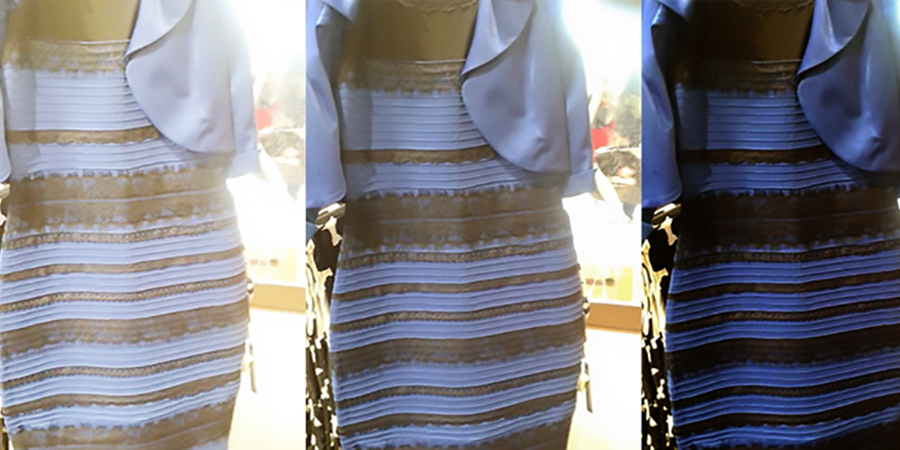 The original image—from Swiked on Tumblr—is in the middle, with a color-balanced "white and gold" image on the left, and "blue and black" image on the right.

The Internet went into a frenzy yesterday because of a photo of a dress. The photo was posted to Tumblr, and as it spread, people divided into "Team White and Gold" and "Team Blue and Black."

The Tumblr user 'swiked' captioned the photo, in part, "is this dress white and gold, or blue and black? Me and my friends can't agree..." The photo was picked up by the popular website Buzzfeed, and the hashtag #TheDress has been trending on Twitter ever since. Why? Because people simply cannot agree about the colors of the dress—which are actually blue and black.

It turns out there's a scientific explanation for the visual discrepancy.

Geoffrey Goodfellow, O.D., chair of the AOA Communications Content Committee and faculty member at Illinois College of Optometry, explains that color is a visual perception, and is therefore open to interpretation and different to all people.

"We have three different color-sensing receptors in our eyes that identify different levels of red, green and blue," Dr. Goodfellow says. "As visible light in the world interacts with these receptors, each of the three color sensors are stimulated in different amounts that are interpreted by the brain as a particular color."

There are multiple other factors that influence how we perceive color, too.

"Color is influenced by the lighting, and the same color swatch can appear very differently under different lighting conditions," Dr. Goodfellow adds. "Even though the physical swatch has not changed, our perception of its color can change. There are many other complicated mechanisms that our brain uses to detect color, pattern, and light changes, so colors are also perceived differently depending on what other colors are adjacent to them. We also have many learned responses to how light interacts in our world that bias our perception of color."

Some social media users have noted that after looking at the photo for a prolonged period of time, the colors "changed." Dr. Goodfellow has an answer for this.

"Staring at a particular color for a long time can also cause chromatic adaptation, which causes our brain to change its color perception of that object and other objects that we look at immediately after looking at the colored object," he says.

When talking about the photo of the dress specifically, Dr. Goodfellow states that the color can be analyzed in many different ways. For example, one could measure color pixels on a computer or use one's experience with flash photography (for example, sometimes white colors are photographed with a "cool" white light and look blue). So the way this particular photo was shot, the lighting and the color balance all play a part. Another photo of the very same dress might not have caused such color confusion.

"In addition, I could be entranced by the meme and stare and stare and realize that it is changing color before my eyes because of chromatic adaptation. Color is certainly in the eye of the beholder and is influenced by what assumptions and experiences we bring to the table," says Dr. Goodfellow.