January 12, 2023
The AOA campaign puts focus on prolonged screen time and how doctors of optometry can help the public keep their eyes healthy at a time when digital device use is exploding at work, school and home. 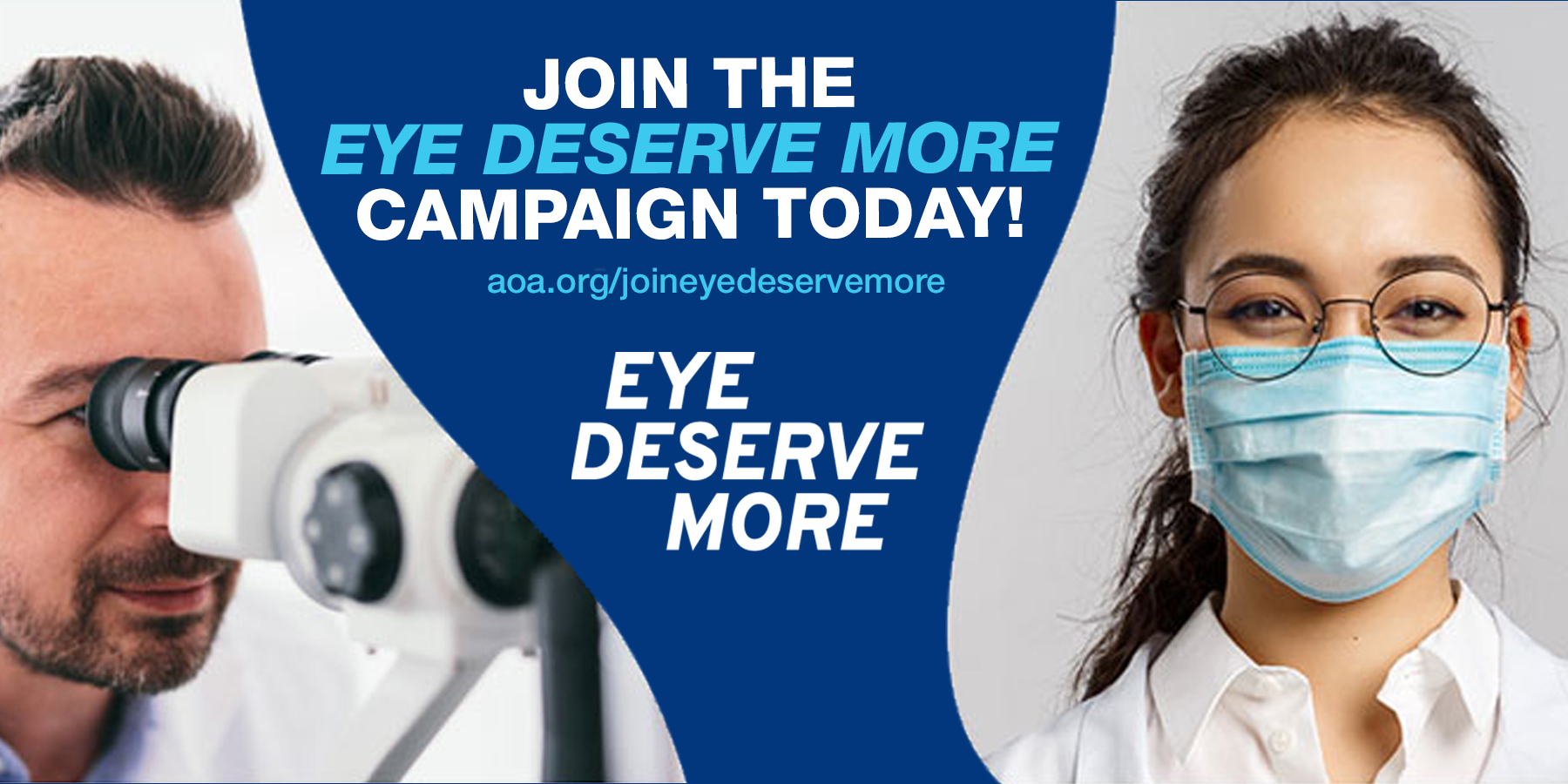 The AOA’s national public awareness campaign, Eye Deserve More, is carrying the standard that everyone deserves, as part of their overall health and well-being, comprehensive eye care delivered by doctors of optometry. Celebrity gamers, inspiring stories about doctors of optometry and patients, and a multi-channel approach bolster the campaign message and lead the public to the AOA’s doctor locator.

In 2022, the Eye Deserve More campaign—which will continue to focus on screen time in 2023—generated:

More than 205,000 clicks to the AOA’s doctor locator and the Eye Deserve More landing page on aoa.org.

More than 93,000 total engagements across celebrity partner platforms. (The AOA has partnered with Olympic surfer Caroline Marks and NBA player Tacko Fall in the past and is currently collaborating with actor, singer and avid gamer Jordan Fisher.)

More than 26.4 million impressions across social and digital ads.

“Our members want the public to understand the quality care that doctors of optometry deliver every day in our practices,” says Teri K. Geist, O.D., AOA trustee and Board of Trustees liaison for Eye Deserve More. The campaign educates and informs the public about the importance of in-person comprehensive eye exams by telling our story as primary eye health care providers.”

Optometry: part of the solution

More than 227 million Americans play video games, and with gaming and screen time on the rise, the risks can grow for long-term implications for people’s eye health. The AOA’s 2022 Gamer Survey results revealed the average gamer spends more than eight hours a day on screens and has experienced various eye-related symptoms from gaming, including eyestrain, headaches, dry eyes and blurred vision. Many gamers are aware of the consequences of extended screen time, but fewer than (46%) of them visit an eye care professional for a comprehensive eye exam every year.

Prolonged use of computers and other electronic devices, such as laptops, tablets and smartphones, can place extra demands on the visual system and contribute to eye and visual discomfort. Nationwide, doctors of optometry serve patients in 6,500 communities and beyond, providing two-thirds of all eye care on a continuous basis.

“Gaming is extremely popular right now among many age groups and all walks of life,” Dr. Geist says. “That audience is the perfect opportunity to continue to tell optometry’s story. What an impact we can make to the millions of gamers! To make sure their eye health is taken care of offline with an AOA doctor of optometry, so they can do what they love online.”

For the campaign, the AOA enlisted doctors of optometry and celebrity gamers to engage audiences. Fisher, an actor, singer, producer, gamer and parent engages fellow gamers and parents on the essentialness of eye care.

“After injuring my cornea years ago, I did not realize how it would affect the rest of my body,” Fisher says. “With the amount of time I spend on screens—about seven hours a day reading, producing, gaming or taking video conference calls—it’s key to practice healthy screen time habits as it can really take a toll on your eyes. That’s why getting an eye exam in person is so important. Optometrists are able to look beyond your eyes into your whole body. I make eye health a priority for me and my family, so we won’t miss any important life moments.”

Fisher was joined in the campaign by Jason Compton, O.D., who practices in New York, is a gamer, is featured in the campaign’s hero video and participated in a satellite media tour (SMT). They started at 7 a.m. and finished about 1 p.m., during which Dr. Compton was interviewed 24 times. The SMT, the AOA’s most successful media tour to date, resulted in 685 airings and 71.2 million impressions across TV, radio and online.

“Literally every almost five or 10 minutes they had me on different morning shows,” says Dr. Compton, who promoted the campaign on his practice’s social media. “It was like San Francisco, Dallas, Tennessee, New York … it was pretty cool. I’d seen the morning news segments while getting ready in the morning, but I had never been on that side of it. The talent asks you questions about the program.

“It was a great opportunity to talk about what the AOA is doing and our initiative with gaming,” he adds. “It was about awareness and letting people know that visual hygiene and visual health is very important and there are things they can do—mainly seeing their AOA optometrist to make sure their health is at 100%. A lot of people might think of gamers—and I am a gamer myself; I play a lot of video games—as teenage kids in the basement playing on a PlayStation. But there are so many people playing games, including people playing Candy Crush on their phones. There’s so much more to it.”

Also joining in the campaign was Meghan Elkins, O.D., of West Virginia—also a gamer—who appeared on a Twitch livestream event in October 2022 with the campaign’s professional gaming partner ARUUU. During the event, they discussed the campaign and its message on eye health during extended screen time.

Dr. Elkins got her start in gaming as a kid when her uncle handed her a controller and let her play the first edition of Super Mario Bros. “We really need to stress the importance of that in-person eye examination in those populations. More and more people are finding, ‘Oh, I have eyestrain’ because of the new way we are working and learning in our world.

“It was such an honor to be asked to be a part of the Eye Deserve More campaign and the livestream,” she says. “I was so excited that people were getting their questions answered. It was a completely different environment. It was really accessible for the people who were watching the stream to just drop a question in the chat. I think they were able to learn some things and we were able to have fun. I can’t wait to contribute more.”

An extension of the public awareness campaign is the Screen Time Alliance, which committed its members—whether they were gamers, scrollers or streamers—to educating the public about their eye health. It is a first-of-its-kind collaboration with major gaming and entertainment industry leaders.

The alliance’s goal: To encourage people to get their eyes checked offline by a doctor of optometry so they can do more of what they love online.

Under the alliance’s pledge, they committed to (1) encouraging their communities to get routine, in-person eye exams with their  doctors of optometry offline so they can keep doing what they love to do online, and (2) sharing information about digital eyestrain and prevention.

In 2023, the AOA is continuing its successful focus on screen time by reaching out to the millions of Americans experiencing the effects of prolonged use of digital devices but who are not seeing an AOA doctor as a health prerequisite.

“Eye Deserve More has been able to generate compelling stories from our members about doctor/patient relationships, which have resonated on social media,” Dr. Geist says. “Those stories have resulted in impressive social media reach. All of the social and digital media content has driven more patients to our AOA doctor locator and millions of impressions with our messages.

“I am so excited for 2023 and the next phase of Eye Deserve More,” she says. “We have an opportunity to continue to engage the public and members in a unique and exciting way.”

Click here to stay updated on the campaign and submit patient stories.

The AOA issues a call for abstracts for its 2023 ePoster Sessions, a hybrid research showcase hosted on the AOA EyeLearn Professional Development Hub and at Optometry’s Meeting® in Washington, D.C.