June 13, 2019
Before Matthew Hennen, O.D., and Rachel Hennen, O.D., knew their father as an optometrist, Mark Hennen, O.D., was dad to them. And today, at Dakota Eye Care in West St. Paul, Minnesota, they also are colleagues. 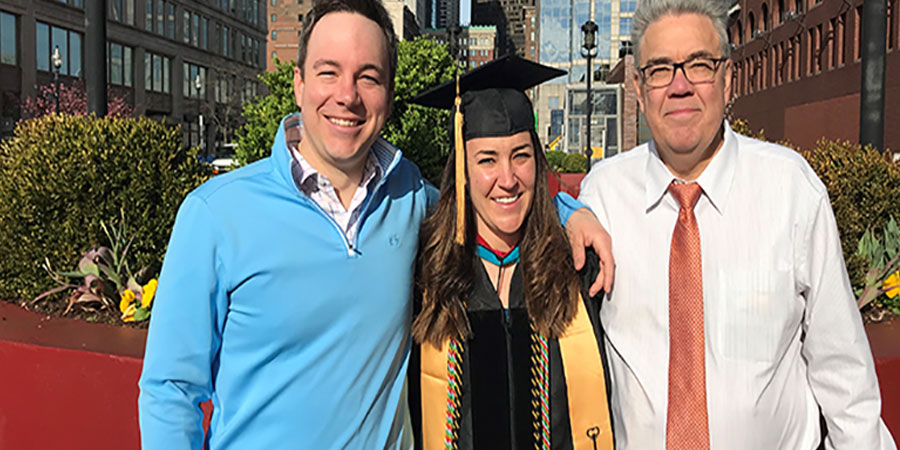 Before Matthew Hennen, O.D., and Rachel Hennen, O.D., knew their father as an optometrist, Mark Hennen, O.D., was dad to them. And today, at Dakota Eye Care in West St. Paul, Minnesota, they also are colleagues.

Dr. Matthew Hennen was the first to join the practice in 2016, followed by Dr. Rachel Hennen two years later. In celebration of Father's Day, the Hennens share what it's like growing up in an optometric family.

What drew you to optometry as a profession?

Dr. Mark Hennen:  I always knew I wanted to be involved with health care. I worked in an emergency room before I entered optometry school. The ER job was exciting, but when cases did not turn out well it was hard to deal with the expectations of the families involved. In optometry, you can make a significant difference in people's lives, without having life and death hanging in the balance

Dr. Matthew Hennen: I've been around the optometric profession my entire life and seeing the change it brings to patients' lives on a daily basis is something that is extremely valuable and rewarding to me

Dr. Rachel Hennen: I like being able to help people and interacting with them on a daily basis. Also, the cases are always different—it keeps you on your toes. It's also a great profession in which to start a family.

Did your father prompt you to go into optometry?

Dr. Mark Hennen:  I did not put any pressure on my children to be doctors of optometry. So it was surprising they both chose the profession.

Dr. Matthew Hennen: I think it's pretty safe to say I wouldn't be a doctor of optometry if it weren't for my father. Being the son of an optometrist—and an influential one at that—opens your eyes to health care as a whole. I couldn't be prouder to be part of a profession that values the patient over everything else.

Dr. Rachel Hennen: Heck no. He always told us to pursue optometry as a profession because you want to do it, not because someone expects you to. People asks that sometimes and I say you don't know my dad very well. He told us to do anything we wanted to do.

What impressed you most about your father in the profession?

Dr. Mark Hennen:  I think they both saw the independence I had to lead the type of life I wanted.

Dr. Matthew Hennen: The amount of time and dedication that he has given on a state and national level over the span of 30-plus years is truly remarkable. To provide that type of service while still running a successful practice is something I am still in awe of to this day. Back in the early days, I remember going to the practice and being watched by staff while he saw patients. As he rose in the state and national associations, we took several family trips to conferences throughout the country where my sister and I became friends with many of the other doctors' children.

Dr. Rachel Hennen: Growing up, I really didn't realize right away how well-known he was in optometric circles. Sure, I knew he was involved. He was always traveling when he was president of the Minnesota Optometric Association. But it wasn't until I got into the field that I really appreciated it. One of the preceptors on my rotation said once, "You know, your dad is like a legend." You don't always realize how much someone has done until you hear it from someone else.

Dr. Mark Hennen:  It is great working with my children. It's great being able to see my children every day at work and have them be a close part of my life. I am very proud of them.

Dr. Matthew Hennen: Not only has he made me a better doctor, he's also instilled the importance of getting involved within the profession. It's imperative for my generation of doctors of optometry to be an active voice and ensure we continue to fight for expansion of scope and equal recognition by third parties.

Dr. Rachel Hennen: It is fun working together. It's also nice to have not only my dad but my brother here too, when I want a second opinion. I have acquired many of my dad's patients, who continue to ask how he's doing.