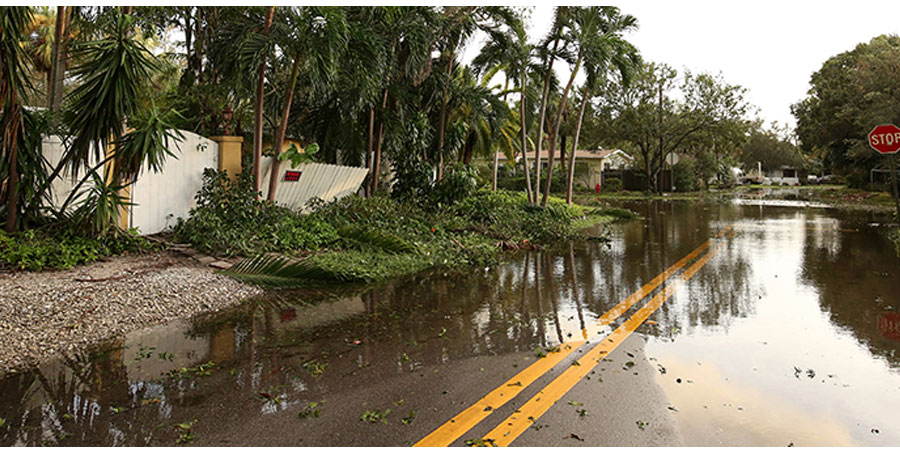 Jamie Casper, O.D., was breathing a little easier on Friday, but just barely.

Dr. Casper had shuttered his Wilmington, North Carolina, home and practice on Tuesday, Sept. 11 and headed inland as a black thunderhead roiled overhead from Hurricane Florence, which was then a category 4 hurricane.

On Friday afternoon though, as the hurricane was flirting between being downgraded from a category 1 to a tropical storm by the National Weather Service, Dr. Casper got word that except for shingle and siding damage, his home was relatively intact. He hadn't gotten word yet on the state of his practice.

"I'm just thankful that no one I know is hurt," Dr. Casper said Friday.

Not that residents of the Carolinas were out of the woods. The National Weather Service was warning of flooding.

Earlier this week the predictions had been dire.

"This is just a kick while you're down," Dr. Casper had said earlier, as the hurricane approached . The real threat was 48-72 hours offshore. Hurricane Florence, then a category 4 storm, bears down on the Carolinas as potentially the first hurricane of this strength to hit the area  since the Eisenhower administration.

Mandatory evacuations along the Carolinas' shoreline took effect Tuesday; others are likely to follow. Still, many aren't taking their chances and are voluntarily packing up, including Dr. Casper and his family. There's simply no reason to stay.

Barely a couple miles from the ocean's edge, his Myrtle Grove office is as "battened down" as it's going to get, Dr. Casper says. The last patient left at 2 p.m. Tuesday and by 4 p.m. Dr. Casper was heading home with the practice's back-up server in tote. Equipment is wrapped in garbage bags, electronics are off the floor and unplugged, and doors are shut to minimize any wayward debris.

The practice is a low-profile, single-story building, which hopefully will hedge against wind damage—as a side, state law requires homes to withstand winds upward of 110 mph—but that's only reassuring to an extent. Florence's winds are every bit of 140 mph at sea, and that says nothing of storm surge.

"If the wind's going to do damage, then it'll do damage and you can't do much about that," he says. "You just hope to avoid the flooding, so we can continue with patient care when it passes."

Secured, stowed and set, Dr. Casper says there's not much else to do except check in with the neighbors and hit the road. Although that's easier said than done. On his drive home Tuesday, police had already started dispatching "flush cars" to escort evacuees outbound in reversed lanes.

"I would say we'll try to beat the crowds, but when you're evacuating a million people there's not really a down time," he says. "There's a mass exodus through South Carolina right now and the roads are bad."

Northern South Carolina communities, such as Myrtle Beach, are increasingly endangered by storm surge heights in the 6- to 9-feet range. As such, most of Myrtle Beach's coastline developments were under mandatory evacuation prior to the hurricane making landfall. Within that mandatory evacuation zone is the home of Barbara L. Horn, O.D., AOA president-elect; it's literally across the street.

"My Myrtle Beach house is the dividing line for mandatory evacuations, so that's not comforting," Dr. Horn said earlier this week. "You just do the best you can and batten hatches."

A Michigan transplant only two-and-a-half years prior, Dr. Horn admits she's figuring out hurricane prep as she goes along. The last hurricane glanced South Carolina in 2016—Category 1 Matthew—but it still did its damage, knocking over trees and causing flooding. But Florence is considerably larger and directly incoming. Therefore, Dr. Horn has prepped windows, barred doors and moved items off the floor in case the home is severely flooded.

Although Dr. Horn has a calm, que sera, sera demeanor toward her home, the practice is a different story. An hour south in Georgetown, the practice is at a dividing line for weather models; Florence's storm surge and wind could weaken that far south but stall out and drop anywhere from 5 to 20 inches of rainfall. Flooding is a real threat and the timing couldn't be more inconvenient.

"We're currently doubling the size of the clinic with new drywall up and painted, and of course now this is coming through," Dr. Horn says. At least they've yet to install carpet in the 1,500-square-foot addition, Dr. Horn adds.

With no-shows racking up and end-of-the-week appointments canceling, Dr. Horn says there's nothing more for them to do but evacuate. She's imploring her neighbors to do the same, as well as colleagues in the storm's path.

The hurricane came inland on Friday.

"It's there and hovering now," Dr. Horn, O.D., said of her Myrtle Beach community.

"I just thank AOA and Optometry Cares for providing emergency assistance for those people who may need support after Florence moves through," Dr. Horn says. "This could be a terrible situation for many, and I encourage my colleagues to donate and support Optometry's Fund for Disaster Relief."

Florence projects to be the most severe storm to threaten the U.S. this year after a seemingly slow Atlantic hurricane season. A storm of this strength is capable of widespread damage that spreads resources thin, and in times of disaster, doctors of optometry—medically trained to provide emergency eye and vision care—are ready, willing and able to monitor, diagnose and identify burgeoning health hazards in impacted communities and assist in recovery efforts. That's precisely the level of care doctors of optometry provided in California's recent wildfires and other significant storms.

Last year, three major hurricanes— Harvey, Irma and Maria—struck the U.S., killing thousands of people and causing billions in damage. Counted amongst those tolls were doctors of optometry, students, staff and their families, often waylaid for days or weeks on end while recovery efforts could commence. And that's where optometry's collegial, caring spirit answered the call to offer a helping hand.

"Optometry is truly a family at all times, but it is in these periods of disaster and uncertainty that AOA and our fellow  members step up to support and help everyone weather whatever storm is standing in our doctors' way," says AOA President Samuel D. Pierce, O.D.

"Optometry's Fund for Disaster Relief is ready to help and AOA leadership is asking all members of the optometric family to donate with us and ensure that doctors are able to continue delivering primary eye health care to America's patients."

Optometry's Fund for Disaster Relief helps change the lives of doctors affected by natural disasters, providing immediate financial relief for critical and urgent needs, such as food, clothing and shelter. A program of Optometry Cares ®—The AOA Foundation, Optometry's Fund for Disaster Relief has granted nearly a million dollars in grants since its inception in 2005.

Anyone can make donations to the disaster fund at any time. Likewise, any doctors and optometry students affected by recent natural disasters can apply for assistance.

Read more about doctors of optometry recovering after natural disasters in the March 2018 AOA Focus.